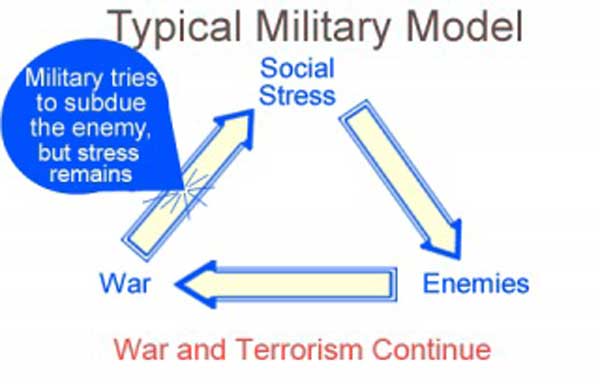 The President’s speech at Congress was well received and then it was MG Torres’s turn to present. She started her presentation with two slides that Dr. Leffler had given her taken from his paper: “A New Role for the Military: Preventing Enemies from Arising–Reviving an Ancient Approach to Peace.”[23] They provided simple illustrations of the abstract IDT concept. This made the rest of her presentation much easier to understand.

MG Torres’s presentation was very well received. After her talk she was asked this question by a conservative reporter from the Wall Street Journal: “Many of our readers do not believe that the security forces in Ecuador are really hovering. This must be some kind of cleaver trick. How could so called Yogic Flyers violate the laws of physics to accomplish levitation?” MG Torres answered, “They are partially right about violating the laws of physics. However, these are the laws of classical Newtonian physics that apply largely on the macroscopic level. The Yogic Flyers are not violating the laws of quantum physics. They operate on the super microscopic level of the Planck scale, the finest time and distance scale found at ten to the negative 33 centimeters. The laws of quantum physics here supersede the laws of classical physics. At this level of the unified field of all the laws of nature gravity is weak and at that level Yogic Flyers manipulate it to their advantage.”

The answer she gave to the last questions she took from CNN’s Pentagon correspondent would later make her famous:

“In the President’s speech she used the term ‘mastery of the skies.’ What does this mean? Is it some kind of advanced air superiority? How will we know when our military achieves it?”

MG Torres replied: “To my knowledge, there is no one currently alive who has achieved this level of human development so we are not certain what it entails. Yogis refer to this highest level of Yogic Flying as “mastery of the skies” where the human body can fly through the air at will.”

MG Torres then said the words which became her career’s most famous sound bite quote. It was gleefully played over and over by every news services worldwide. At the time it was taken as a joke, years later her profound words were taken seriously: “When the US Army Golden Knights demonstration and competition parachute team no longer have to wear parachutes to safely accomplish the same complex aerial stunts performed so artistically and beautifully by the Air Force Thunderbirds and the Navy Blue Angels, then it is a safe bet to say that the US Army has achieved the ultimate level of air superiority–“mastery of the skies.”

Years later, right after LTG Torres was bestowed her third star along with the Presidential Medal of Freedom,[24] the US Army Golden Knights put on a thrilling aerial show in her honor to demonstrate their amazing precision expertise in Yogic Flying and they did NOT wear parachutes.

Also in GA Torres’s UN office was the citation for the Defense Superior Service Medal[25] which she was awarded by the Secretary of Defense for her brilliant plan that successfully prevented nuclear war with North Korea. Known as “Torres Four Prong Prevention Plan” or “T,” “F,” triple “P” (TFPPP). It has since been studied reverently in all war colleges worldwide. Here is a short synopsis of her radical plan:

•   Just in time, intelligence revealed the exact moment of the North Korean secret nuclear attack against the United States. In order to counteract and prevent this attack, the US Air Force immediately sent large cargo planes loaded with Yogic Flyers. The Yogic Flying sessions were coordinated and timed to commence at the exact moment when all simultaneously arrived at their secret locations. This initial and crucial phase of Torres’s plan used the unified field to create immediate social coherence in North Korea and de-escalated the rising tensions just as one drop of cool water can lower the temperature of water to just below its boiling point.

According to the mission description released to the public, these planes flew as close to North Korea as possible without interloping on their territory. Obviously, crossing the border would be seen as a provocation. But in reality, years later after all the mission details were declassified, it was revealed that these planes were outfitted with a new top secret cloaking technology as well as specially built silent engines which emitted no thermal signature. Some of these planes managed to circle undetected around the high stressed areas, including the capital of Pyongyang as well as military-related facilities deep in North Korea.

•   When Torres was formulating the plan she knew that she needed enough Yogic Flyers to equal at least the square root of one percent of the population of North Korea.[26] But since nuclear war was eminent, she opted to play safe and follow part of the Powell Doctrine[27] of going in with overwhelming force.

Yes, it was definitely yogic flying overkill, but to make sure societal coherence was quickly established, her plan called for the US Navy to send in not just one, but two carrier battle groups just skirting off the 12 mile limit from North Korean Eastern shores. One battle group was positioned in the Sea of Japan and the other in the Western Korea Bay. Each battle group carried an additional carrier with no planes, so larger numbers of Yogic Flyers could be accommodated on board. LTG Torres adapted this idea from her USAWC military history class when she studied the 1994 Haiti operation which used an aircraft carrier as a huge troop carrier.[28]

•   Army Yogic Flyers manned the carrier along with Navy and Marine personnel who participated in creating coherence via yogic flying when not performing their other duties. Selected Coast Guard personnel also participated, so all military services were represented in this critical historic mission.

•   The most important and last part of the Torres plan was implemented after the tensions had completely dissipated. It could only happen after the North Koreans had first-hand experience of how Yogic Flying had so completely out foxed them. Only then did their leaders come to the realization that their military was far behind ours and was using obsolete technologies to defend their country.

The Supreme leader of North Korea personally invited the US Marines to land on their beaches and immediately set up bases of Yogic Flyers to continue to calm the tensions in their country. As soon as this was accomplished, the Supreme Leader and other governmental leaders began to effectively govern from a place of higher consciousness, brought about by the strength of the unified field created by the Yogic Flyers, and with their help they were finally able to achieve their nation’s once elusive lofty goals. Marine Yogic Flying instructors supervised the training of North Korean military forces to create their own Prevention Wings. The Supreme Leader awarded LTG Torres the Order of Friendship[29] for devising and commanding her bold and innovative TFPPP.

GA Torres was almost done packing. One item remained. It was a sealed envelope that Dr. David Leffler had presented to her at his New York City presentation on the history of IDT at the International Center for Invincible Defense.[30] Although she had a busy schedule at the UN that day, intuition hinted this might be their last chance to meet again because he was in his nineties. After his presentation, Dr. Leffler spotted her and said, “I have a special gift for you; it is a part of history you should have.” Before giving it to her, he made her strictly promise not to open it until completing her UN assignment. She eagerly opened the faded tan envelope.

Inside was an autographed and dated 2017 draft paper copy of Dr. Leffler’s entry in TRADOC’s first “Mad Scientist Science Fiction Writing Contest about Warfare in 2030 to 2050.”[31]

It also included a copy of the contest rules. On the title page in his sloppy childish handwriting Dr. Leffler penned, “Thank you for leading the transition of our world’s family of nations into a safer and better future. Without you our planet would have followed the obsolete and futile practices predicted by others in ‘Warfare in 2030 to 2050.'”

As GA Torres read Dr. Leffler’s essay, she wondered, “How could he know how and when my life events would occur. He could have researched her life using Internet searches and secretly contacting people who knew her, but what about all the things that were correctly predicted after 2017? Is it possible he mastered time travel?”

Dr. Leffler had devoted his life to researching consciousness by regularly practicing TM and Yogic Flying. GA Torres recalled an aphorism from a page in the Yoga Sutras of Patanjali. She rummaged through one of her boxes of packed books and read from the page. It said that through advanced meditation one can obtain “knowledge of past, present, and future.”[32]

She wondered, “Is that how Dr. Leffler the Mad Scientist did it? No, he couldn’t have, because the contest guidelines clearly advise entrants to “avoid ideas that violate the laws of physics.”[33] “Precognition violates such natural laws,” she thought, or “hmmm … or does it?”

[33] US Army Training and Doctrine Command (TRADOC) Mad Scientist Science Fiction Writing Contest – This essay about Invincible Defense Technology was submitted to this contest. A PDF about this contest can be download at: http://mwi.usma.edu/wp-content/uploads/2016/11/Mad-Scientist-Writing-Competition-Flyer.pdf – A PDF of this essay is available for download at US Army TRADOC Mad Scientist “Articles of Interest“