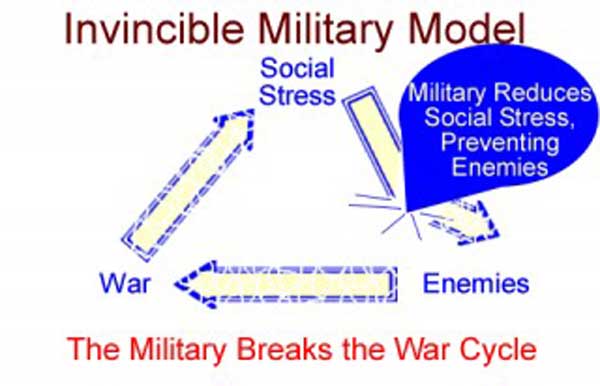 General of the Army (GA) Camilla Torres was packing her office. As a five-star general, her staff would do this for her, but she insisted on doing it herself, just as she always had from the time she was a young lieutenant. She found that packing her own mementoes promoted purification and growth. It caused her to reflect not only on her previous assignments but on her entire career. Such introspection always brought a realization of what had been accomplished as well as what she could have done better. She learned much from these reflections and appreciated how she had grown.

GA Torres was leaving her plush corner office at the United Nations (UN), and the position she had created under great scrutiny from the world’s militaries: Guardian of the Peace (GoP). Under her leadership, the GoP had become the most powerful and coveted military position. In the past, militaries derived their strength from threats and using powerful weaponry. In recent years, they had come to realize that true strength is gained by preventing enemies from arising in the first place, victory BEFORE war.[1] Military scientists worldwide were exploring ways to harness the power of the mind to that end.

The primary duty of the GoP is to command all countries’ Military Prevention Wings:[2] groups of military personnel practicing an advanced consciousness-developing program twice daily. The Prevention Wings responsible for creating and maintaining world peace accomplished this by harnessing the power available at the source of existence, the level of the unified field, a thousand million million times (10 to the 15th power) more powerful than the nuclear force.[3] The ongoing group meditation technology to take advantage of this energy had so successfully alleviated the collective stresses leading to terrorism and war that war had become a thing of the past.

Under GA Torres’ command as GoP, the world had experienced a lasting peace that it had never before known. As a result, GA Torres became the first US “General of the Army” since GA Omar Bradley. Previously, this five-star rank was granted only to American generals commanding armies for another nation during a time of war. Because of GA Torres’ unprecedented success in establishing and leading Prevention Wings, the President asked Congress to change the rules and bestow this highest rank on all generals commanding the special UN Prevention Wings that maintain peace without fighting.

Few Reserve Officers’ Training Corps (ROTC) officers last all the way through the officer ranks to become generals. Camilla Torres was truly an exception. As early as high school she was already exhibiting the charismatic leadership style that had served her well in her career. A sharp straight “A” student, she turned down scholarships from both USMA at West Point and the US Naval Academy.

Instead, she chose to attend Norwich University because it catered to her personal style of being “ahead of the pack.” It was the right fit for both because Norwich historically has pioneered bold innovative ideas. It was the birthplace of ROTC and the first military educational school to admit women.

Torres learned about the Norwich pioneering spirit even before she arrived. In 2012 emails[4] were sent to all rooks of the 4th Company, 3rd Platoon, asking if they would participate in a study using Transcendental Meditation (TM) to lower stress. She immediately went to the TM website and found a quote from the Mayo Clinic, the number one ranked hospital in the nation: “Transcendental meditation is a simple, natural technique… This form of meditation allows your body to settle into a state of profound rest and relaxation and your mind to achieve a state of inner peace, without needing to use concentration or effort.”[5]

The quote immediately caught her attention because she was interested in the medical field and was planning on entering the nursing program offered at Norwich. She already knew from the nurses who recognized her potential and were mentoring her that nursing was a stressful profession, especially so in the US Army. Military nurses are often required to work long days and nights under challenging conditions to accomplish their mission.

This is why she decided to learn and practice the TM technique twice a day, every day at Norwich, and continued with this practice after she was commissioned in the US Army. The profound deep rest it provided gave her a competitive edge over her colleagues.

The diploma which attracted the most attention over the years and had gotten her the most notice was the uncommon wording on her online MS degree in Maharishi Ayurveda and Integrative Medicine:[6] “By participating in the collective practice of the Maharishi Technology of the Unified Field, this graduate has directly enlivened the unified field in world consciousness, intensifying global coherence and giving the world a taste of utopia.” She smiled to herself as she packed away this diploma; these were certainly words she had lived by.

These bold words served her well later in her career when they caught the attention of GEN Rufus Jackson. Every four star general has a general’s aide who is a nurse. The general selected MAJ Torres because of her outstanding record as a competent, capable and intelligent leader. They first met as he was walking by her newly assigned office with his entourage and noticed her boxes piled up outside. Her door was wide open so he let himself in and introduced himself and his staff. She was hanging her unconventional diploma prominently featuring a photo of Maharishi Mahesh Yogi in full beard and Eastern dress. The general had never seen such a unique diploma. As he looked it over, reading out loud the visionary words, he asked with a puzzled look: “What does this mean?”

She smiled, basking in the attention of the general and his staff, and said: “Yes, they are prescient words, but as an experienced leader this might be of interest you. Serotonin is a powerful neurohormone. It can mediate feelings of happiness, contentment, and even euphoria. Research indicates that leaders exhibit higher levels of serotonin. Research also indicates that low levels of serotonin correlate with aggression, poor emotional moods and violence. You would be interested to know that a peer-reviewed publication reports that when the size of a large group of people meditating at Maharishi’s university changed, serotonin production of people in the nearby community changed correspondingly. The results suggest a plausible neurophysiologic mechanism that could explain the reduced aggression and hostility found in a whole society in the vicinity of large groups of individuals practicing this type of meditation together.[7] Not only are we humans influenced by the unified field, but we derive our very being from that field. Thus we influence that unified field through our thoughts and deeds, especially strongly through the advanced TM techniques I have studied.”

“That’s a bold statement, young lady,” the general said, “It’s good that you are tuned in to the scientific research. Without good research to back these claims, people will not take you seriously.” Years later, after finishing her assignment, COL Torres again met GEN Jackson, now retired, to ask his advice on how to handle her recent acceptance into the US Army War College (USAWC). “Camille,” he said, “From the very first day we met I felt it in my bones – this is a gal who will rise to the highest levels of command.”

As GA Torres took down her USAWC Masters diploma off the wall, she reflected on her time well spent there. She had learned valuable information from the required military history readings. Militaries are traditionally conservative to new ideas. As an example, tanks were first used to follow-up after the infantry rather than to lead, because military leaders were initially afraid to use this new technology. They only reluctantly agreed to deploy tanks with the tactics they were accustomed to. She remembered reading that Dwight Eisenhower, soon after WWI was threatened with court-martial by the Chief of Infantry. His offense? Advocating revolutionary new ways to deploy tanks. In his Infantry Journal article,[8] Eisenhower pioneered what is now called a Revolution in Military Affairs (RMA).

Technologies of Consciousness – the new Revolution in Military Affairs

As a junior officer an inner voice told Torres that another, unprecedented RMA was looming on the horizon. She would be an important part of it. Her TM course mentioned compelling, peer-reviewed research, which could be applied globally to prevent war and terrorism. The concept intrigued her, especially later when she came across an article published in Pravda.[9] Militaries were already beginning to utilize this very approach.

Fascinated, she researched what is known in military circles as Invincible Defense Technology (IDT). Dr. David Leffler,[10] a coauthor of the Pravda article, was a pioneering IDT researcher and prolific writer who had earned a Ph.D. studying IDT[11] and served as an associate for a think tank at USAWC.[12] Over his career he had published in over 4000 locations worldwide[13] on the topic of IDT.

“Why had I never heard of him?” she wondered. Intrigued, she met with Dr. Leffler, long retired at 80 years old but still possessing a keen intellect. He advised her to carefully study the proceedings from the three International Conferences for Invincible Defense.[14] She noticed former Soviet Bloc countries had sent representatives who spoke highly of IDT. One of the key speakers was Lt. Gen. Tobias Dai, Former Commander of the Armed Forces, Republic of Mozambique, who gave a presentation about the Mozambique military achieving peace by utilizing IDT.[14a]COL Torres also read a thoroughly conducted longitudinal study of the lasting effects of that project in Mozambique.[14b]

Amazingly, the defense strategy was based on a powerful advanced meditation technique – Transcendental Meditation and the TM-Sidhi program, including “Yogic Flying.” COL Torres was astounded. How could meditation prevent war? But once she started researching TM and Yogic Flying, she was captivated by the prospect of deploying IDT to prevent terrorism and war. She pored over a previously published Masters paper in the USAWC library by COL Brian Rees titled: “The Application of Strategic Stress Management in Winning the Peace.”[15] Rees, she discovered later, was a respected former US Army Command Surgeon featured in Stripes and published in Military Medicine.[16]

COL Torres’ time at the USAWC ended abruptly one week before she was to graduate, when CPT. Blaine MacGregor, the aide to the Commandant MG Isamu Hyun burst into the National Security Seminar, where COL Torres was giving a presentation in Root Hall. Since it was a classified presentation, there was no way for the aide to previously contact anyone in the room; by regulation all electronic devices were turned off. CPT MacGregor did not bother to walk quietly up to the podium to whisper to her; instead he opened the door, gasping for breath after running up the stairs, and shouted, “COL Torres, report downstairs to Commandant’s office immediately!”