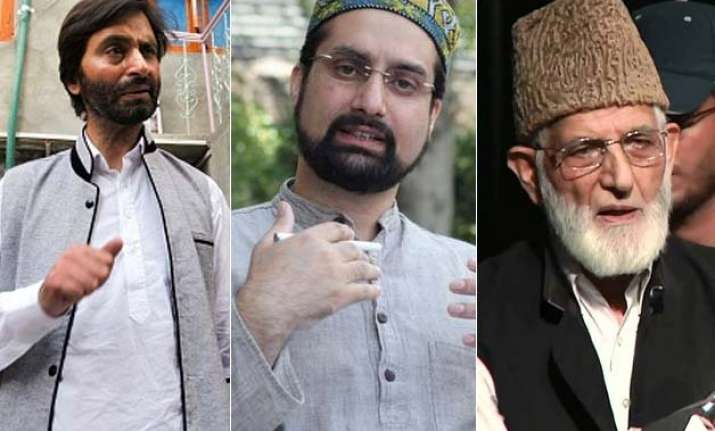 The more things change, the more they stay the same! This old phrase can be most aptly applied to the theatrics of talks that the Hurriyat stage-manages every time a new Government takes charge in the centre. This time there were two differences in the script. First, the NDA government was sworn in for a second term with a massive majority, so, it was not really a new Government in place but the old one, which had articulated a very clear policy of having talks only within the ambit of the Constitution. Second, the initiative for the talks came from the Governor of the state; normally the initiative is taken by some local leader of the mainstream party or the posse of so-called liberals whose heart consistently bleeds for the separatist lobby and Pakistan for reasons best known to them. Of course, provision of huge sums of money for the bleeding hearts is often conjectured.

The mainstream leaders may not have been the initiators of the proposal but they were first off the block in giving it a Thumbs-up to the same. “The Governor says Hurriyat has agreed to talks. Then, talks should be held with them,” said National Conference (NC) president, Farooq Abdullah, within two days of the proposal being mooted. “Better late than never,” was the euphoric reaction of Peoples Democratic Party (PDP) leader, Mehbooba Mufti, even as she welcomed the “willingness of the Hurriyat Conference to hold talks.” She also mentioned that the “underlying purpose of the PDP-BJP alliance was to facilitate dialogue between the government and all stakeholders.” Nobody can beat these leaders in political exploitation of a situation to earn brownie points for themselves.

It seems that the statement of the Governor came as a surprise to the Hurriyat who quickly gathered their wits and expressed willingness to participate in a “purposeful” dialogue on Kashmir if New Delhi “ends ambiguity” and involves Islamabad in the process as well.

The aforementioned statement of Hurriyat brought everything back to square on and also elicited a sharp response from the local BJP establishment. The BJP National President and J&K in-charge Avinash Rai Khanna, probably in consideration of the fact that the entire episode had been spearheaded by the Governor, was muted but firm in his response, “our doors are open for anyone who wants to talk while keeping their faith in the Constitution of India,” he said. The other BJP leaders were not so accommodating! In their statement they said that Hurriyat would need to “publicly acknowledge the indisputable status of Jammu and Kashmir and that it is an integral part of India,’’ and “commit their loyalty to the Constitution of India and seek talks only under its ambit.” The BJP spokesman from Jammu and Kashmir, Anil Gupta, went to the extent of blaming the conglomerate for the killings in the valley. “The JRL of Hurriyat does not represent the majority of Kashmiris. They are responsible for the senseless killings of Kashmiris by the Kashmiris at the behest of Pakistan. None of the Hurriyat leaders has signalled any change in their stance and continue to promote separatism.”

Clearly, Governor Satya Pal Malik has erred in reading the political situation and had come up with a statement without proper ground work for the same. If he did wish to become a mediator in this sensitive issue he should have opened back channels with the Hurriyat and convinced them to agree to the preconditions of the NDA government before making the announcement. As things stand, there seems to be no ground for initiation of a dialogue.

In view of the rigid posture being adopted by the Hurriyat nothing can be achieved from such an exercise. It has been carried out by successive governments earlier with no results. The Hurriyat leadership leverages talks and dialogue as a platform to boost its diminishing relevance. Talks have become all the more important for the Hurriyat since Pakistan  is gripped by internal strife and a precarious economic situation, further aggravated by international isolation; it can barely keep alive its “moral and diplomatic” support to Kashmir. In real terms, the unending flow of funds is severely restricted which spells disaster for the separatists. For Hurriyat, the only hope lies in re-establishing their relevance through initiation of a dialogue and that is not happening because of the firm, righteous and justified stand of the NDA government. That they have played a double game with the Governor and conned him into bringing up the talks issue is also possible.

In any case, the Hurriyat no longer represents the popular sentiment since the people of Kashmir aspire to go about their business in a peaceful environment and prosper within the ambit of democratic, resurgent India. They wish to be a part of the Indian success story and have nothing to do with the redundant concept of Azaadi or joining Pakistan.

In case the Governor wishes to make a positive contribution in Kashmir, he should use his good offices to convince the Hurriyat leadership to understand the true aspirations of the people and root for a leadership model that is positive and progressive.  He should encourage the leaders to contribute positively in the state election process that is likely to be initiated soon. Not only should the Hurriyat leaders call upon the people to fearlessly take part in the election, they should but should also stand for the same, create a representative character and then make demands as the legitimate representatives of their people. The changing of colours with the change of weather is now an old, shoddy philosophy which should be discouraged. It is time to face reality, leave behind the trauma of the past and work towards a better tomorrow. In this forward movement the Hurriyat should remain steadfast with the people.