Honouring Braves – Will The Colonel Get Justice? 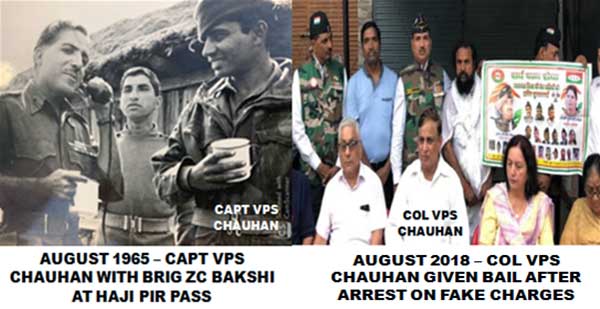 Indian governments habitually remember braves during wars and conflict, occasions like Independence Day,  Republic Day or when politically opportune to garner votes. Otherwise, neglect of soldiers remains the norm. Momentary praise of bravery turns to apathy thereafter, wheedled by politicians and bureaucrats. Operations during government in power or under same political party are played up, with others forgotten no matter how monumental. August 1965 saw epic capture of Haji Pir Pass making international headlines and causing major setback to Pakistani morale.  Among the braves capturing Haji Pir, was Captain VPS Chauhan. 53 years later in August 2018, 76-year old Veteran Col Chauhan  was arrested on fake charges under the SC/ST Act. The case lingers on with perpetrators at large; just one example of system apathy towards braves. During service, Col Chauhan had commanded Republic Day Contingent of his unit (1 PARA), fought in 1971 Indo-Pak War, served in Siachen, and was Kashmir Force Commander when  commanding Special Group of SFF (1988-1992).

On August 14,  2018, Col Chauhan was arrested under the SC/SC Act on purported charge of abduction of Usha Chandra, wife of Harish Chandra PCS, ADM UP from the park in front of Col Chauhan’s house. He was taken to the police station where Harish Chandra pressed multiple charges in his FIR. Col Chauhan’s statement was not taken. He wasn’t asked any questions nor informed why he was arrested.  His phone was confiscated and he was locked up with hardened criminals. However, CCTV footage in the park showed that the Chandras along with their gunman, servant and other goons trapped Col Chauhan in the park, throwing him on the ground and kicking him in the chest. The Investigating Officer Anit Kumat saw the CCTV footage at 11 AM on August 14, which proved the FIR was false and arrest illegal. Col Chauhan was produced before ADJ Nalin Srivastava at 5PM on August 14. Srivastava refused to hear Col Chauhan and instead of affixing hearing on August 16 (August 15 being holiday) gave the date of August 20. Col Chauhan was denied immediate bail plea despite evidence and police readiness to drop all charges.

Col Chauhan filed a counter FIR on August 17 against Harish Chandra, Usha Chandra and their accomplices (total seven persons) who assaulted him in the park, with intent to murder.  The police issued arrest warrants accordingly. National dailies reported on August 20  that Police had arrested the gunner and servant of ADM Harish Chandra. But no other arrests were made including the ADM and his family members. Obviously the police was complicit. Circle officer 1 Avnish Kumar, investigating officer in this case, made a lame-duck statement saying, “All efforts are being made to arrest the accused named in the FIR. We will take action as per procedure”. Significantly, DM NOIDA wrote a letter to Chief Minster UP on August 18 that all charges against Col Chauhan were false.

ADM Harish Chandra had bought a house in NOIDA in 2014. He  splurged about a crore of rupees to renovate it and went on a spree of illegal additions and encroachments, which affected Col Chauhan’s apartment alomg with some others . Multiple complaints were sent by Col Chauhan in 2014, followed by an FIR. Finally on July 17, 2018, authorities came and demolished an overhand water tank of the ADM.  On August 8, 2018, the ADM lodged a false complaint with the DM that Col Chauhan threatened him with a rifle but police could not file FIR for want of evidence. But on his false complaint, a government inquiry has been instituted against him.  Two days later on August 10, the ADM Harish Chandra argued with Col Chauhan for objecting to his illegal construction, his gunner on his side in threatening posture. This conversation was videotaped on phone and sent to DM NOIDA by Col Chauhan.

On August 24, 2018, NOIDA authority demolished external illegal construction of the ADM’s house but the illegally constructed rooms were not demolished being locked, with owners on the run. On August 25, ADM Harish Chandra was suspended for assaulting and attempting to murder Col Chauhan in a premeditated plan. Same month, IGP Meerut investigated and concluded Col Chauhan has no weapon at home, his weapon was stored past 20 years with an army unit, and no altercation or argument took place as alleged by ADM Harish Chandra.

On the day Col Chauhan was arrested, ADM Harish Chandra spoke to media about charges he filed in the FIR – abduction of his wife from the park. But when truth emerged from the CCTV footage, Usha Chandra in a press conference changed her statement from the FIR saying the abduction was “outside” the park.  But when Col Chauhan filed counter FIR from jail, Chandras went into hiding and strangely could not be found by UP Police. Usha Chandra released a video from hiding, saying “humara property ka koi vivad nahi tha” but contradicted herself in same video by saying, “humara to chota sa chajja tha usko turwa diya’. NOIDA Authority demolished ADM’s  illegal construction after Col Chauhan’s arrest became national news.  Usha Chandra made yet another press statement saying Col Chauhan  himself wasn’t part of the abduction but three “unknown” men of his did that. Later she again changed her statement saying she knew one of the men, Harish Lal, who used to eat at her place.

Released on bail after six days in prison, Col Chuahan told media,  “Entire life I have served the country and now I have been charged under sections of molestation and SC-ST act. It was a planned conspiracy by the ADM and he used his influence in police to get me arrested. I have requested Chief Minister Yogi Adityanath to look into the matter. I am also concerned about safety of my life. The police has now lodged another FIR against the ADM, his wife and son and others under section 307 (attempt to murder).” Ex-Servicemen of NOIDA, coming out strongly against the unethical and dirty treatment meted to Col Chauhan, a war veteran. They welcomed the decision to suspend ADM Harish Chandra but demanded his immediate arrest stating, “We want the ADM arrested. A retired Colonel was arrested within two hours of a complaint, but the ADM is still absconding. We stand by our demand for a judicial probe into the assault, the role of the police and the administration”.

In October 2018, Usha Chandra submitted five affidavits of witnesses to the court, all of which were plagiarized. On April 9, 2019, Usha Chandra approached Allahabad High Court to get the case transferred to BP Ashok, SP Crime Meerut and for stopping court proceedings at NIODA; plea in consultation SC/ST Commission since BP Ashok belongs to SC/ST. However, Allahabad High Court dismissed the appeal with the Order: “You will not approach the court on similar matter”. On April 10, the final report was submitted to the District Court, which was accepted. Usha and Harish Chandra have stopped receiving court notice since then; notices are being pasted on their gate in presence independent witnesses.  Chandras plan delay the case possibly bringing more false witnesses, not accepting court notices and keep harassing Col Chauhan. For fear of lives, Col Chauhan and family cannot live in their house in NOIDA and past 10 month have been living in Army guest houses. Harish Chandra, his family and accomplices continue to remain free because of their nexus with the police and administration. In addition, they are playing the SC/ST card which has political patronage. There is no other reason why arrest orders given in August 2018 have not been affected despite Harish Chandra surfacing in various locations periodically.

News reports past several months indicate law and order in UP and Bihar leaves much to desire, putting it mildly. According to a scholar, “The Unnao rape case and resultant angst of civil  society resulted in ordering CBI inquiry and FIR against the MLA who is in jail. The case became sensitive after media highlighted it on TV and in newspapers and UP Government ran for cover. Reasons why such cases happen on regular interval include: majority of elected MPs and  MLAs particularly in UP and Bihar are either from criminal background or use criminals in elections and have money to contest; police is incompetent and politicized, not interested in fair investigation, incompetence and without tools for investigation. How much money can be made in a police station’s area is sole consideration and everybody up the line are involved, and; three, judiciary is corrupt (as admitted by veteran judges), therefore incompetent and overburdened. Unless these issues are addressed, we will continue to make noises in media and carry out candle marches on India Gate”.

Long gestation of the Unnao Rape case, arrogance of the accused in saying it will not be easy to prove charges against him in court, and politicians from the same party in open support of the accused, all indicate the rot in the system. Recall the Rs 1000 crore worth narcotics recovered recently from the house of a senior police officer recently, with the officer getting away by saying he was not even aware that Nigerians were staying in the house. Obviously the money was being shared up the line including for electioneering. In such environment, can Col Chauhan hope to get justice? Is this the manner the nation should honour its braves? If this is the treatment to a war-veteran Colonel, what should soldiers of younger rank expec?.

UP Chief Minister Yogi Adityanath has announced plans for ‘Naya Uttar Pradesh”. Will this include streamlining justice and protecting lives of soldiers and veterans? Can a judicial probe be ordered into the sordid affair of Harish Chandra & Co?  Can a safe environment be provided for Col Chauhan and his family to return to their home in NOIDA?

12 thoughts on “Honouring Braves – Will The Colonel Get Justice?”