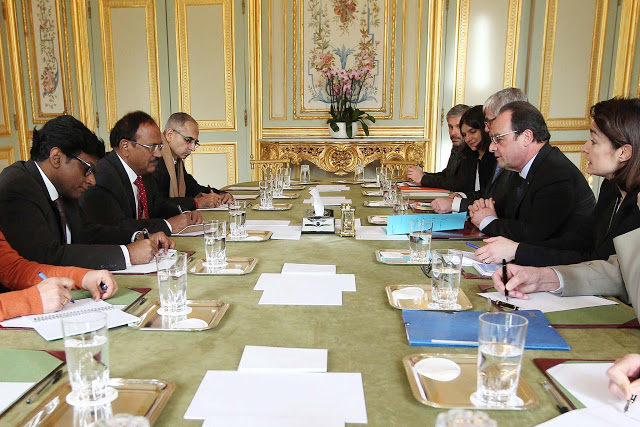 The French have recently rediscovered their old Gaulish belligerent genes. The list of France’s present military intervention outside its territory is long and the locations spread over two continents: Africa and the Middle-East. French troops are deployed in Syria (Ops Chammal, 3.500 men); in Central African Republic (Ops Sanaris, 900 men); in the Sahel (Ops Barkhane, 3.500 men); in Libya (Ops Daman, 900 men); it is a lot for a country like France. To this should be added, 10,000 army personnel (Ops Sentinelle), participating in the security measures accompanying the state of emergency declared after the Paris terrorist attacks in November.

While France has been at the forefront of the battle against ‘terrorism’, waging a long war against Al-Qaida and the Islamic State, Delhi too has for years had firsthand knowledge of terrorism, though in India’s case, the terror often comes from a neighbouring country; the country has not been engaged in outside military operations after the sad Sri Lankan episode.

This shared concern between India and France for terrorism, is one of the reasons why in December 2015, it was announced that President Hollande would be the Chief Guest on the occasion of the Republic Day celebrations: “This invitation conveys the excellent quality and dynamism of the strategic partnership between India and France, which will be further strengthened on this occasion. This visit will also follow on from the Paris Climate Conference, at which India played a decisive role in reaching an ambitious agreement,” said the brief communiqué from the French Presidency.

The French government was just recovering from the November 13 horrific attacks in Paris and was commemorating the killings of several journalists of Charlie Hebdo in December 2014, when attackers from the other side of the Indian border, stepped into the Pathankot airbase and created havoc for nearly 3 days.

On January 4, France condemned “the attack perpetrated against the Indian military base in Pathankot”, adding: “We extend our condolences to the victims’ families as well as to the Indian government. France stands alongside India in the fight against terrorism.”

Terrorism, security and strategic dialogue will dominate the visit of the French President in Delhi, although it is clear that Hollande comes to India first and foremost to take the next step in the Rafale deal. During the last few weeks, both sides have been zealously working to seal an agreement on January 25, when the French President meets with Prime Minister Narendra Modi.

President Hollande may also discuss the realizations of Le Corbusier, the French architect who built Chandigarh in the 1950s and 1960s or even the change of climate, for which France worked hard for several months in preparation of COP21 in Paris, but it will not be the main dish of the visit.

But the ‘deal’ is far from being signed. While Defence Minister Manohar Parrikar recently remarked, ‘it’s closer to completion’ and refused to go into the details, his French counterpart Jean-Yves Le Drian is quoted by Reuters saying ‘nothing has been finalised as yet.’

The sudden rush of Ajit Doval, the National Security Advisor to Paris ‘to talk about terrorism’, was part of the efforts to make the Republic Day a real success. During his talks in Paris, the NSA’s brief was not only ‘terrorism’, but the purchase of 36 Rafales for the Indian Air Force.

Hardly five days after Doval’s return to Delhi, Le Drian is to fly to Delhi to ‘save the deal’ or ‘fine-tune the agreement’, depending on the optimism of the analyst.

One positive sign is that the Modi Sarkar recently reinstated with immediate effect, ‘services’ as an eligible option for offsets in defense deals. The Government amended the 2013 Defense Procurement Procedure (DPP-2013) just before the release of the revised DPP-2015. It should be helpful to sort out the differences between Dassault Aviation and the Indian government over the offset obligations of the former.

The Rafale deal is indeed the raison d’être of the busy French President’s visit to New Delhi and it is vital for his failing popularity in France, while it also important for Narendra Modi’s credibility.

A telling symbol of the closeness between India and France is the fact that for the first time since Independence, foreign troops will participate in the Republic Day parade and the soldiers will be French, belonging to the 35th Infantry Regiment (35 RI), based in Belfort in Eastern France.

While some participants will come from Afghanistan, others are already in India, where they participated in the Shakti-2016 joint-exercises with the 2 Garhwal Rifles of the Indian Army in Bikaner.

Defence spokesperson Lt Col Manish Ojha explained the context: “The size and scope of this combined exercise is unparalleled and will be characterized by regular, realistic, academic and natural exchange which would form a part of Shakti-2016. The broadened and unprecedented scope of the exercise stands as a testament to the well-knit people to people and military to military ties between France and India.”

The 35 RI is not an ordinary regiment!

Presently associated with the 7 Armoured Brigade, it is one of the oldest French regiments, created in 1604. During its long history, the regiment was renamed several times, i.e. Anjou (in 1671) and Aquitaine (in 1753); later it participated in Napoleon’s campaigns and earned laurels for its heroic actions during the battle of Wagram in 1809 and the Russian campaign in 1812.

More recently, the 35 RI was engaged in external operations in places like Afghanistan, Lebanon, Ivory Coast, Kosovo, Chad or Centre African Republic; the 35 RI has also been extensively used for internal security ops in France. It is not only the best French infantry regiment, but also the best equipped unit with the latest gadgetry in its armoured vehicles.

Its 1195 members are known as ‘les gaillards’, which could be translated as ‘the tough guys’ (though female jawans also serve in the 35 RI).

India is reciprocating the honour given to the Indian Army when its troops marched down the Champs Elysees on July 14, 2009 on the occasion of French Bastille Day.

But that is not all; India is in the process of finalizing an order for three more French Scorpene submarines, after the construction of the first six presently built at the Mazagon Docks is completed. Next year, Delhi should issue a tender for six new-generation stealth submarines; France is on the ranks for the tender.

Navy chief Admiral Robin Dhowan recently announced: “[our] aim is to ensure the islands are not only well protected but also act as a strategic location for basing aircraft, warships and submarines. The proximity of A&N Islands to Malacca Strait makes them very strategic since they overlook busy sea lanes and choke points.” Here too France would like to be on India’s side.

Hopefully, the cultural and other aspects of the relations will also be covered during the French President’s visit. It is significant that Hollande will spend his first day in Chandigarh, the first ‘Smart City’ in India, created by a French man, Le Corbusier.

A train à grande vitesse (bullet train) between the city of Le Corbusier and the Indian capital, as well as some mega solar energy collaboration is also on the cards. That would be very smart.