reports on wide range of issues. Her area of expertise is in Indian and South Asian geopolitics. She has reported from the very volatile India-Pakistan border and has contributed to mainstream print media in India for about a decade. Community media, sustainable development, and leadership remain her key areas of interest. 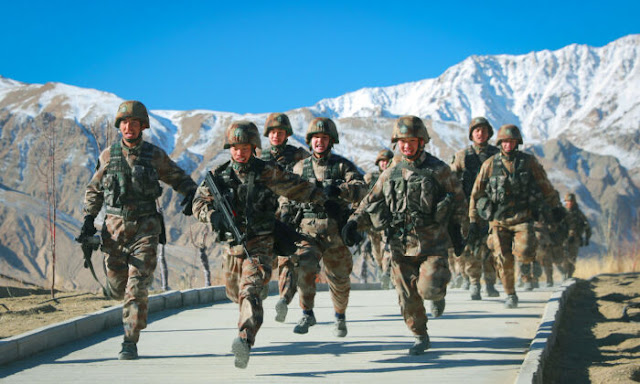 Since the bloody clash between Indian and Chinese soldiers in the remote Galwan region of the Himalayas in 2020, border tensions between the two neighbors have shown little sign of easing.

The decades-long border dispute finds its roots in the Chinese regime’s first leader Mao Zedong’s conquest designs in western regions of Xinjiang and Tibet, according to a leading historian on the issue.

Claude Arpi, a French-born Tibetologist now living in India told The Epoch Times that China’s aggression in the western sector in India’s northernmost Ladakh region started not long after Mao came to power in October 1949 when the Chinese Communist Party’s (CCP) People’s Liberation Army (PLA) marched into Tibet and Xinjiang, the two territories that today share a long border with India.

Until then the Chinese were not present on the Indian frontier and it was the Soviets who were “monitoring and controlling” the borders of East Turkestan, a Central Asian satellite state of the Soviet Union that is today known as the western frontier of Xinjiang, with India, according to Arpi.

By December 1949, the PLA, without artillery and with only a few hundred vehicles provided by the Soviets that had to be abandoned a few weeks in due to lack of fuel and spare parts, had descended on Xinjiang by foot.

“The PLA took over the entire Xinjiang and came at the gate of India in two months,” Arpi said.

Arpi, an author of two books on the 1962 India-China war and multiple other books on Tibet and the Sino-India territorial dispute, said that it’s obvious that Soviet leader Joseph Stalin knew of the CCP’s operations in East Turkestan but it’s not clear why the Soviets gave up this territory under their control to the Chinese communists.

“They probably thought that Mao would do the ‘dirty’ work and the Soviet control over these areas could continue as before,” he said.

At this time India had a consulate in Kashgar in East Turkestan that it had to close and its consul general had to escape on foot crossing the Karakoram mountains to reach Leh town in India’s Ladakh. It considered this closure as a fait accompli since a revolution had taken place.

At the junction between India-, China- and Pakistan- controlled territories today, there’s an uninhabited cold desert called Aksai Chin—also the only land connection between Xinjiang and Tibet.

By the time the CCP finished its conquest of Tibet in 1951 to 1952, Mao realized that Aksai Chin, the desert area in the north of Ladakh was strategically extremely important for the regime’s future.

“It was an uninhabited area, nobody could live there, but the Chinese decided to build a road there because it was the easiest way to connect the two new provinces [of Tibet and Xinjiang],” said Arpi. “That’s how in Aksai Chin today’s Chinese Highway G219 came into being. Was surveyed in 1952-53, China started building it in 1954 and it was inaugurated in July 1957.”

After marking the road in 1952, the CCP didn’t stop there. “In 1956 China agreed to a map that gets more or less half of the Aksai Chin and in 1959 it pushed it further south,” said Arpi.

India was born as a nation in 1947 and was taken unaware of the Chinese Communist Party’s activities in its dominion of Jammu and Kashmir which included the province of Ladakh and hence Aksai Chin.

The Indian administration in New Delhi came to know of G219 on its territory only after an Indian patrol party was detained by the Chinese in Haji Langar in September 1958. Haji Langar was an extreme Indian patrolling point in the north of Aksai Chin; It was also a place where Mecca-bound pilgrims were fed. The 1962 war between India and China ignited after Mao annexed Indian territory and built G219. India was defeated in the conflict and lost the Aksai Chai region in a matter of days.

The Epoch Times has obtained a booklet published by the government of India in 1963 entitled “Chinese Aggression in Maps.” and it’s a cartographic description of how without provocation the CCP entered the uninhabited Indian territory of Aksai Chai and how the Chinese claim lines unilaterally continued to change from 1956 to 1962.

The Indian administration in its booklet said the Chinese were claiming boundary lines in Ladakh according to their “bargaining convenience and progressively increasing extent of occupation of Indian territory through force.”

Arpi said even the international community was taken unaware of the Chinese activities in this desolate part of the world. “The Soviet Union might have known, but by that time, it was no more their ‘business,’” he said.

“And after that the 1962 war took place, the PLA pushed south and occupied some other places that they have not vacated to date. China vacated some areas and some didn’t vacate. In the end, where is the LAC?” said Arpi, adding that China’s “bargaining convenience” continues untill date.

The Line of Actual Control (LAC) is a notional line of demarcation between India-controlled territory and China-controlled region. The Chinese Premier Zhou Enlai first spoke about the existence of the LAC during his visit to Delhi in 1960.

Arpi said nobody actually knows the specific position of the LAC; Zhou sent a map of what he considered was LAC in 1962 but it didn’t correspond to the reality on the ground in several places.

India and China started the process of exchanging maps only in 2000. Since then they have shared maps only of a central sector called the Barahoti area but nothing has been exchanged on Ladakh where there’s a massive military buildup on both sides today.

“In 2002, there was a meeting, China brought maps of its own perceptions and India did the same. After 20 minutes China and India took back their maps, probably realizing that the perceptions were too far apart,” said Arpi. “It has however to be noted that detailed maps of the western sector have never been exchanged,” he added.

Arpi said the Chinese have continued with the same strategy of “salami-slicing”—encroaching on the territory a bit at a time—until recently when they tried to grab a few miles in the Himalayan Galwan region to gain a better altitude for a view of the strategic road Indians were building there. It ended in the June 2020 clash, a hand-to-hand fight where the PLA attacked the Indians with metal rods wrapped with barbed wire.

The clash killed 20 Indian soldiers and an estimated dozens of Chinese soldiers, though Beijing has only officially acknowledged a small handful of deaths.

“China grabs what it wants or what it ‘needs’, whether in Ladakh or in the South China Sea, and then says: ‘Now let us negotiate’. But later, nothing happens during the negotiations,” said Arpi.

The 2020 conflict in Galwan led to heavy military build-up on both sides of the disputed border, and to ease tensions the two countries’ militaries started bilateral talks.

But despite 15 rounds of these talks between commanders on both sides little progress has been made. Arpi said it’s “remarkable” that for the first time the negotiations involve the army because the branch has better ground perception, and this is important in Ladakh, a high altitude plateau where height means gaining a strategic advantage over the other.

“Modi government did a good thing to give the negotiation to the army, to the 15 Corps Commander in Leh. And of course, there is one additional secretary from the Ministry of External Affairs who has attended all these talks. Modern negotiations need to involve all the stakeholders,” said Arpi.

“Is it not strange that there has been so much coverage about Ukraine; so much criticism of Putin, but nobody has said anything to Xi Jinping when in May of 2020 he started grabbing land in Ladakh. In that case, it is only because of the Indian Army with the Indian government’s support, that the Chinese advances were stopped,” said Arpi.

The historian noted that it would be very difficult for the CCP to concede in this dispute because domestically it has promoted disinformation and propaganda about the Galwan conflict, including pointing to India as the aggressor in the clash and covering up the total Chinese casualties.

“Today, if Beijing gives back some areas in Depsang [a disputed area in Aksai Chin], it’ll be known in China. It will be known by the members of the [CCP’s] Central Committee, the Politburo, it will be known by the media, and Xi Jinping will lose face. Xi Jinping is not in a position to lose face before November’s 20th Congress,” said Arpi, referring to an important CCP meeting where Xi is bidding for an unprecedented third term in power.

The CCP has also been seizing territory in the South China Sea as well where it is building and militarizing islands, Arpi said. While the West can only “make a lot of noise” and “put sanctions,” India is the only country that stood “physically, militarily” against the PLA, he said.

Venus Upadhayaya reports on wide range of issues. Her area of expertise is in Indian and South Asian geopolitics. She has reported from the very volatile India-Pakistan border and has contributed to mainstream print media in India for about a decade. Community media, sustainable development, and leadership remain her key areas of interest.

First Published in The Epoch Times