Has China hit the spending curb? 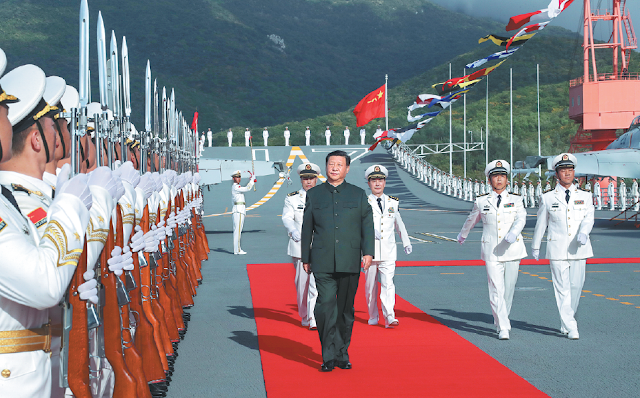 One question is highly relevant to predict China’s future: How deep are the pockets of Chairman Xi Jinping, recently promoted to People’s Leader of Communist China? Beijing’s status in the world may depend on the answer. Though today it looks as if Xi’s ‘pockets’ have no bottom, the question remains, can it last forever?

Take the Shandong, the first-generation Chinese aircraft carrier which was launched in April 2017 by the People’s Liberation Army Navy (PLAN). It is China’s second aircraft carrier after the Liaoning. The conventionally powered ski-jump carrier with a 70,000 tonnes displacement was commissioned on December 17, 2019 at Sanya (Hainan) by President Xi. It probably costs far more than the estimated cost of $9 billion. A third aircraft carrier, Type 003, is already under construction and may have a displacement of 85,000 tonnes.

For the first time, a catapult-assisted takeoff barrier arrested recovery (CATOBAR), like on the most-modern US carriers, will be used. The PLAN broke all the records by launching 28 ships in 2019. The list of the new ships was recently published on Twitter: Two Type-055 destroyers, Eight Type-052D destroyers, 16 Type-056 corvettes, one Type-075 LHD 1 (a multi-purpose amphibious assault ship capable of receiving helicopters and a well deck, known as a ‘landing helicopter dock’) and one Type-071 LPD (amphibious transport dock, also called a landing platform/dock). This is only one field. Another domain of ‘investment’ for the Chinese Government are foreign projects like the Belt and Road Initiative and the flagship China Pakistan Economic Corridor; the latter alone is estimated to cost $62 billion. If one adds international projects (some undertaken in India’s neighbourhood i.e. in Sri Lanka, Bangladesh or Nepal), but also in Central Asia, Africa or South America, deep pockets are definitively required to finance all this, even if some of the ‘generous’ gifts are loans-in-disguise.

China is also pouring yuans in infrastructure, particularly in Tibet and Xinjiang. In the last five years, it has relentlessly developed the infrastructure on the ‘Roof of the World’. In 2017, China Tibet News announced the reconstruction and an extension of Lhasa Gongkar Airport. In April 2019, Xinhua wrote: “As one of the region’s key projects during China’s Five-Year Plan, the estimated investment reaches 3.9 billion yuan ($634 million) for the new terminal building construction.” The main body of the construction was completed at the end of 2019 while the new terminal building is scheduled to be opened in 2020.

Take the railways, on January 2, it was announced that most of the Lhasa-Nyingchi railway (north of Arunachal) had been completed; the balance is expected to be operational in October 2021; its total length will be 213 km. This massive requires money, as do the three new airports on the plateau, to be completed in 2021 or the railway to Kyirong at the Nepal border. Another ‘investment’ is the relocation of population on the Indian border. On January 6, Tibetan Autonomous Region’s (TAR) government Chairman Che Dahla (or Qizhala)said that Tibet would start a pilot scheme for constructing 30 towns on the border: “In developing a group of border towns and villages into centers of commerce, logistics hubs or tourist destinations, Tibet will proceed from local conditions, pool strength and resources to upgrade infrastructure, improve public services. A few billions more! It is not only national defence, international cooperation or internal development which require billions and billions of yuans, internal security too. In 2019, The Nikkei pointed out: “Beijing has actually been pouring even more resources into domestic security than external security.” The figures are flabbergasting: China’s annual spending on domestic security has more than tripled since 2007, to reach $193 billion in 2017.

“The government of what is formally the Xinjiang Uyghur Autonomous Region said last month that its security spending alone rose 92.8 per cent last year from 2016 to reach 57.95 billion yuan. It had spent only 5.45 billion on security in 2007,” as per a research published by Adrian Zenz of the European School of Culture and Theology in Korntal, Germany. And what about the billions of dollars poured into propaganda by the United Front Work Department to project China’s ‘peaceful rise’?

The question is: Can the spending spree continue forever; the answer: It cannot. The Chinese economy is said to have only progressed by 6.0 per cent in 2019; it was the weakest growth rate since the first quarter of 1992. The trade war with the US, the weakening global demand and alarming high borrowings by local governments are responsible for the slowdown. “With the economic slowdown in China, the Chinese government is strictly controlling the volume of capital flowing out of China, making Chinese investors work much harder than before to shrink the debt level and difficult for Chinese investors to pay back the debts acquired overseas,” according to Singaporean newspaper Lianhe Zaobao. The Communist country’s pockets definitely have a bottom.

This article Has China hit the spending curb? appeared in Mail Today/DailyO