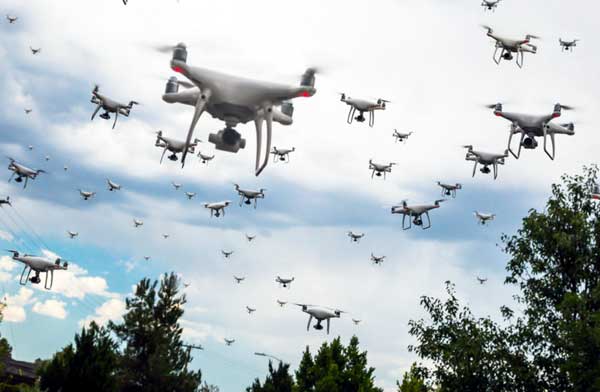 For Ground Based Air Defence (GBAD) in its operational role to counter the adversary’s air threat by being a part of the Integrated Air Defence System (IADS) at the national level,  the following two new realities have gradually emerged:-

This work examines the fall out of the above two realities and lists out the challenges (read action points) that need to be addressed urgently in the field of GBAD.

The new focus of air threat

Given the spike in proactive assertiveness and increased belligerence of our northern neighbour and the unfolding of the events in the year and a half gone by, it would require no explanation to assess the new focus of the air threat of the future. The following points are made:-

The above-stated neo-realities of the air threat will force the following compulsions on GBAD:-

The edifice of GBAD rests on three pillars, namely, Sensors, Shooters and Battle-Management Command and Control (BMC2) systems. Very simply, the sensors to detect the air threat as far forward as possible, shooters to inflict a successive and seamless punishment to the threat shifting from weapon-to-weapon in real-time and the BMC2 system to execute the entire air defence battle of detection-identification-destruction in a matter of few fleeting minutes.

The challenges (action points) to address the new realities along the above three pillars subscribe to the following three major requirements:-

Each of these is enumerated along the above three verticals.

While there may be any amount of valid criticism of the Defence Public Sector Undertakings (DPSUs) or the Defence Research and Development Organisation (DRDO) as regards inordinate time and cost overruns in delivering the projects, unfulfilled promises, keeping the Services waiting endlessly for their urgent operational requirements or more,  one of the few areas where they have achieved significant success is the area of sensors be it  on ground sea or air.

Electronics and Radar Development Establishment (LRDE) of the DRDO as the design agency duly supported by Bharat Electronics Limited (BEL) as the Production agency (PA) and with neo-strong support from the private sector (Tata Power, L&T, Mahindras and more)  today we are at a stage where we are capable of making every genre of radar. Whether these are Fire Control (FC) radars that control the fire of guns and missiles or Tactical Control (TC) radars that do long-range surveillance and can auto-designate targets to FC radars or Early Warning (EW) radars for long-range surveillance alone all are within our indigenous capability to produce.

What is the new challenge in Sensors?

While everything appears to be on track, there are multiple challenges to counter the new realities. These are enumerated briefly:-

One of the ways to make them lighter is to use the latest technology. For instance, the use of germanium nitrate for the trans-receive modules and employing digital beam-forming techniques to detect low RCS targets. Also, today the technology allows having surveillance, passive detection and jamming capabilities on the same platform. These must be checked out.

Not only this, today the technology allows dual-capability of radar-based surveillance, as well as surveillance based on electro-optics on a single lightweight platform. That is the way forward to go in the field of LLLRs for the northern borders.

Out of the 5 Young Scientist Laboratories established by the PM in Jan 2020, the one based at IIT Mumbai deals with quantum technologies. It has to rise up to the requirement of designing worthwhile quantum radar. The stealth threat is already upon us[iii].

The Challenge (action points) in Guns

There are many who have long written the obituary of the towed/self-propelled guns as a potent GBAD weapon system. This author has always believed in the power of air defence guns and their inescapable and well-deserved place in the inventory of GBAD weapon systems. Time has endorsed this viewpoint.

Today there are a number of takers of air defence guns. These weapons riding high on the enabling technologies are providing a cost-proportionate and effective kill solution for small RCS targets like drones or swarms.

That said, guns as terminal-end main frame weapons must also be kept razor-sharp to take on the high-end threat as well. In this context, the following challenges need to be addressed in our scenario:-

As regards the upgrade, while the L-70 gun upgrade has reached a figure (classified) further of which no upgrade is possible (weapon not fit enough) the same for ZU-23 must start. ZU-23 gun with an EOFCS will prove to be a sure low-cost killer for low RCS targets.

The challenge ( action points) in missiles

THE GBAD weapon inventory is an integrated family of guns (towed and SP) and an entire continuum of surface-to-air-missiles (SAMs) deployed in a layered and tiered manner. Based on a theatre grid, the SAMs extend a long fire-arm for a successive and seamless punishment to the threat from the terminal end to hundreds of km. We have every element of this fire-arm- some imported some our own. The challenges in this field are as under:-

What about the SAM for the mechanized elements of the TBA ( Quick reaction SAM or QRSAM range20-30 km). The ongoing project of DRDO+BEL must move from experimentation to operationalization in the hands of the user[vi]. ( further details classified).

Air Force is entrusted with the responsibility of the air defence of the Indian national air space. In execution of this responsibility, it has fielded a national level BMC2 system called the Integrated Air Command and Control System or IACCS. Extending from the apex level, right down to fire units in the field, IACCS control all the air defence weapons of the three Services ( excluding the fleet at sea).

There are three imperatives as regards IACCS:

In the essence of what has been stated above, here are some final reflections:

The current inventory of GBAD must be sustained till new systems can pitch in. Periodic overalls, product improvements and comprehensive upgrades are inescapable solutions to keep an ageing and near obsolescent inventory alive.

THAT THERE IS AWARENESS IN THE GOVT AND WILL TO ACT  is a matter of satisfaction.

[i] “Indigenous quick reaction air defence system to be ready for production next year,” at www.thehindu.com. Accessed on 18 Jun 2021.