Frontiers and Borders: Breaking the logjam on the Northern Border 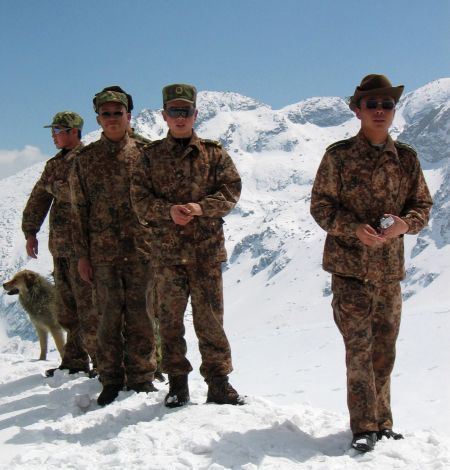 Listen in the north, my boys, there’s trouble in the wind;

Trouble on the Frontier of a most amazin’ kind ….

—Rudyard Kipling, Mutiny of the Mavericks

Kipling’s words referred to the Russians at the frontier, it’s the Chinese today.

The Treaty of Westphalia 24 October 1648, involving no fewer than 194 states represented by 179 plenipotentiaries negotiating over a few years established the system of political order based upon the concept of co-existing sovereign states including the inviolability of borders and non-interference in the domestic affairs of sovereign states. However, where the borders lay and resolution of conflicting claims persists till today.

The earliest recorded attempt at negotiating a boundary dispute is of 1222 AD when the English and the Scots set out to mark their kingdoms. That the negotiations failed and the negotiators narrowly escaped execution is another matter. A clearly defined, accurately depicted and accepted boundary being essential for exercising sovereignty within the nation state, the process starts with mutually accepted broad contours of where the boundary should generally lie and political agreement to refine and define it. The boundary is then subjected to ’delineation ’ which essentially implies drawing on the map where the boundary runs and finally ‘demarcation’ by identifying and marking on the ground with natural features, boundary pillars and so on. And finally boundaries can be defined by natural features like rivers, watersheds, prominent landmarks or artificially by latitude and longitude reference. Where such an exercise is not considered critical, politically or economically, and both nation states find it expedient to let the ground reality prevail, the concept of ‘frontiers’ emerges wherein both states exercise control up to a general line leaving an opaque zone or buffer ensuring avoidance of confrontation or conflict.

History records that four out of five conflicts were caused by disputed boundaries or violation of accepted boundaries. Adding to the grist in no small measure is the legacy of colonialism. Colonial Britain addressed boundaries and frontiers from the perspective of imperial interests and not securing lasting sovereignty for a unified India. Consequently, except where a direct threat from a neighbouring power suggested demarcation so as to draw the inviolable line, the British were content to declare major stretches as frontiers; North West, North East. Or leave the process at unilateral delineation, even when acceptance was repudiated by the other; MacMohan Line in the East and the Johnson, MacDonald lines in the West with Tibet / China. While the Mac Mohan line came near to defining the generally accepted alignment of the Indo – Tibetan boundary in the Eastern Sector, the Western Sector remained the major bone of contention with irreconcilable perceptions of where the boundary should lie. We therefore have to contend with a situation where even the first stage of a boundary settlement is nebulous.

Post the First Anglo-Sikh War and under Article 4 of the Treaty of Lahore 9 March 1846, the Lahore Durbar ceded all territories between Rivers Beas and Indus to the British and Article 12 in turn rewarded Gulab Singh with ‘Independent Sovereignty” of these territories to be made over to him by a separate treaty. This was translated through Article 1 of the Treaty of Amritsar 16 March 1846. Article 4 further stipulated that the territories of Gulab Singh shall not be changed without British concurrence. The Karakoram in the north and its extension south-east was the extent of the Sikh Empire when these treaties were concluded. Treachery of a vassal of the Sikh Kingdom had been rewarded.

Johnson, an official of the Survey of India, while at Leh en route to Khotan in 1865 came up with the “advanced boundary line” of the Kashmir State without any serious physical survey. This extended the ceded territories of the Sikh Empire eastwards to the Kun-Lun watershed encompassing Aksai Chin. It found expression in the Survey of India map of 1868 and continued to be shown as such thereafter. In 1872, Johnson resigned from the Survey of India and joined the Maharaja’s service as Wazir of Ladakh. Perhaps as a favour for cartographically extending the maharaja’s domain.

In 1893, Hung-Ta Chen, the Chinese official at Kashgar, handed a map showing the proposed boundary to George McCartney, the British consul-general at Kashgar. McCartney agreed with the proposal and forwarded it to the British Indian government. This showed the border along the Karakoram Mountains which was a natural boundary up to the Indus river watershed. The British presented this line, known as the McCartney-MacDonald Line, to the Chinese in 1899 through Sir Claude MacDonald, the British representative at Peking. The Chinese did not respond and it was taken as accepted. The boundary had more or less reverted to the extent of the ceded territories of 1846. In 1962, the People’s Liberation Army advanced up to the 1899 MacDonald Line and is generally now the Chinese claim line as was also articulated in 1959.

Based on imperial British cartographic declarations of shifting boundaries in the Western Sector, India inherited and chose to persist with the whole of Aksai Chin being part of erstwhile Kashmir state integrated into India. The Chinese Highway 219, vital for linking Sinkiang and Tibet and effective control over Tibet, was constructed within their 1959 claim line. The Chinese proposals and claim lines of 1959 and 1982 emphasise this ground reality and is very unlikely to be given up.

While the analysis, views and theories doing the rounds of academic circles and seminars may suggest the long term strategic purpose of Chinese actions and the threat to India, the fundamental objective is to bring around an agreement on the contours of the boundary, of course as perceived by the Chinese, so as to set the path for delineation and demarcation.

Diplomacy by its very definition and nature is designed for sugar coated compromise. It is no substitute for and is inversely proportional to hard national power. Under the Sino-Indian Border Peace and Tranquillity Agreement (BPTA) 1993 the two sides agreed to call the entire disputed border as the Line of Actual Control (LAC), which in fact became a ‘frontier’; liable to alteration by force and  with the hope of delineation. However, 22 rounds of talks by special representatives later, nothing appears to have been reconciled. Over the last two decades the pattern followed is of Chinese nibbling of areas claimed by us, our response to ‘stand firm’ opposite where they have already reached, followed by talks of de-escalation and thinning out leaving the Chinese holding where they have ingressed. All this is then presented as a ‘peaceful diplomatic solution’.

China today is an expansionist power with historical grievances, much like Germany in the 1930s, blatantly disregarding treaties and conventions. Such powers have always been balanced by coalition of alliances or building corresponding power to resist and address the asymmetry. Our neglect, unwillingness and incapacity to invest in creating such corresponding power, and our ideologically and morally driven non alignment precluding alliances fore-closes these options. With both avenues closed to address this expansionism, the future holds humiliation behind the façade of diplomacy.

Irrespective of the political dispensation in power, our national security issues are a matter of exaggeration and magnification of minor tactical actions by the ruling party and any setback, actual or perceived, is painted as a sell out by the opposition leaving no scope or ground for serious and pragmatic debate for resolution with national interest in focus. Internal politics overrides national interest. This and the Indian Parliament 1962 resolution to recover every inch of Indian territory from China makes any seriously negotiated settlement very nearly impossible.

For six decades we have wished away the reality. Emotional hyper nationalism is no substitute for comprehensive national power and sober handling of national security issues. What then is the solution to this logjam? Do we have the will and wherewithal to force the issue? Can we shed the ideological baggage or impractical resolutions? If not, then perhaps a practical and honourable accommodation with China remains a pragmatic option. Zhou Enlai’s proposal of 1960 and Deng Xiaoping’s of 1982 needs serious consideration free from and above bindings.

The nation and the political leadership is free to choose what course to follow but would not be free from the consequences of the choice.

One thought on “Frontiers and Borders: Breaking the logjam on the Northern Border”