From Doklam Standoff to a Trade War? India initiates review of IT imports from China

Amid the Doklam standoff, India appears to have opened a whole new front with China which could potentially escalate into a trade war. On August 16, the Ministry of Electronics and Information Technology (MeitY) initiated a review of the IT products imported from China in the wake of growing concerns over data security.1

The government has issued a notice to 21 such manufacturers including Samsung, Apple and the Indian manufacturer Micromax to file reports confirming their compliance with government laid standards.2

The notice has a direct bearing on big players from China such as Xiaomi, Gionee, Oppo and Vivo, who have swept the Indian smartphone market and hold a combined market share at 54 per cent, as of June 2017.3 Such a review could also bring suppliers across the globe in the telecom and networking segment under scrutiny, including Chinese telecom players like Huawei and ZTE. 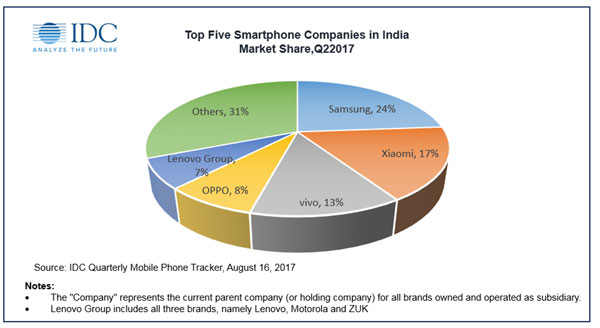 The government’s decision has to be seen in the context of three issue areas. Firstly, given the deep inroads Chinese electronics and IT products have made in the hardware and telecom market, genuine security concerns have arisen regarding the protection of data and personal information of millions of Indian users traversing over the networking equipment. Chinese products in the telecom segment are also under the scanner in countries like Australia, the UK and the US. The Government of India has already elevated its efforts towards a Data Protection Framework, recognizing the importance of data protection and keeping the personal data of citizens secure and protected.4

In this context, the government would certainly put on notice electronics and IT hardware manufacturers who have been selling products in India without testing and certifications. This might also call for stringent compliance, audits, rules and regulations in the near future. China itself has been wary of the personal information of its citizens being misused, with its new CyberSecurity law (2017) placing restrictions on the transfer of personal information and business data overseas.5 China has secured access to the Windows source code6 and has made numerous attempts to gain access to the source code of Apple7 as well.

The second aspect relates to the existing trade imbalance between India and China, which has already swelled to $ 51 billion. Electronics and IT products are a key constituent of Chinese exports to India, estimated to be around $ 22 billion.8

The MeitY’s move may also be seen in the context of the government’s push for its flagship programmes of ‘Make in India’ and ‘Digital India’, which aim to boost indigenous manufacturing in this domain. A 2016 NITI Aayog report drew attention to India’s shortcomings in the electronics industry given that it continues to remain a large importer especially in the telecom segment.9

A review of IT imports from China, if it unveils any irregularities in compliance or reveals any security breach, could pave the way for Indian manufacturers to increase their domestic market share. At the same time, it may also reduce to an extent India’s massive trade imbalance vis-à-vis China. The burgeoning and price-sensitive Indian smartphone, telecom and networking market is a paradise for Chinese manufactures who have acquired the lion’s share in a short time span, displacing not just Indian players but also established global brands. With the renewed focus of the government on security of data and information pertaining to citizens, the road ahead for some of the manufactures might prove to be rough.

The current situation between the two countries will also be factor that would have a bearing on the issue. If the review decision is a result of the fallout of the Doklam standoff, then India has certainly raised the stakes for China, hitting where it hurts the most — its exports. With a slowing economy, which fundamentally is export driven, China cannot afford any such adverse impact on its electronics manufacturing industry. At the same time, other countries may follow India’s decision to initiate similar reviews of Chinese-made electronics products.

A number of commentaries in the context of the Doklam stand-off have made a mention of the ‘three warfares’ strategy of China, consisting of manipulating public opinion, psychological warfare and legal warfare. In principle, the application of the ‘three warfares’ strategy intends to control the existing discourse and influence perceptions to advance China’s interests, while compromising the capability of opponents to respond.10

While China over the last couple of months has used some aspects of its ‘three warfares’ strategy, it is India which appears to have taken China by surprise with its decision to review the import of IT products from China. India has opened a whole new front which could turn out to be an Achilles heel for China, especially if other countries follow suit as well.

Given the genuine security concerns, India has the right to call for such a review, and even impose penalties for non-compliance. The need to kick start electronics manufacturing in India is one of the government’s key domestic priorities. While Indian smartphone manufacturers may not offer a similar kind of value proposition as their Chinese counterparts, India needs to protect the interests of its own business enterprises and the security of the data and information of its citizens, probably the way China does.