Foot Wear for the Soldier 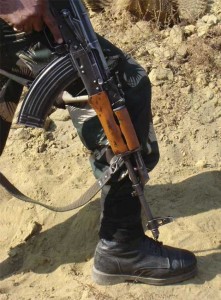 An old saying says “the army marches on its stomach” but can it march without excellent footwear? Thus the old song “these boots are meant for walking implies “the army marches on its boots as well”. Footwear has always been an important part of a soldier’s battle gear, the boots required had to be rugged, comfortable, light, injury resistant, multi -usable as economic considerations inhibit use of single purpose shoes, each designed for a unique task. Shoes are the least glamorous aspect thus the most neglected, combined with socks they have collectively put off many a tracker dogs, which lost the scent of the petty mischief monger, at various training academies.

The drill boot with thirteen nails on the sole of the boot and a half moon shape steel ring on the heel, ankle high, heavy weight to make them rugged was the standard equipment with which we passed out. If there was any science in its design most of us would have stomped our foot harder at the drill square, and those thin white canvas shoes with which we did our physical training and cross country were designed for economics not sports or games.

Today a lot of research and thought has gone in to design a drill boot, games shoe and a running shoe for the gentlemen cadets at the Indian Military Academy…

Thus was born the famous “Jungle boot”, which soldiers used for long marches, and while doing commando course, essentially a cross between a canvas shoe and a drill boot. The boot directly molded sole (DMS) did not meet the requirement of drill, but only longevity which is all about economics. Today a lot of research and thought has gone in to design a drill boot, games shoe and a running shoe for the gentlemen cadets at the Indian Military Academy for an injury free and comfortable training regime on your feet while marching, playing games or running.

Rigorous training does have its own set of problems, but when injuries due to stress and strain during training reach figures of 2600 injuries per year in the first ten weeks, both at the various academies and training centers, there was a need to study the problem and find answers. One of the spin offs of an injury is that it affects the self-confidence of the soldiers, which arises as the person becomes a laggard and nagging injuries are carried forward by the young soldier lifelong thereby further inhibiting his self-confidence lifelong. The organization thus had to step in to find answers, as the fall out rate was becoming worrisome. Thus after a lot of experimentation a team of sports medicine qualified officers from IMA under the stewardship of the commandant with a lot of scientific study designed three shoes, a drill boot, sports shoe, and a running shoe for the gentlemen cadets.

The drill boot of our time weighed 1.69 Kgs and had a sole of 2.5cm including the heel. It did not follow a correct weight distribution pattern, and had low absorption to ground reaction, was unstable, created Achilles tendon the toe box was cramped, thus our drill sergeants constantly told us to quietly move your respective toes inside the toe box. A user trial of twenty five drill boots was carried out at the National Institute Sports Center at Patiala and the results were disastrous. The boot increased friction, was stiff, less flexible, lacked an inner lining was generally uncomfortable. In our youth we were like bumble bees, i.e. “the bee does not know it is aerodynamically unstable thus flies”. We also did not know about the drill boots misdeeds and unscientific nature thus marched on to glory. In the experiment it emerged that while doing drill 3-4 times the body weight is transmitted to each leg while stamping with the drill boot, and this had to be reduced. These boots required to be replaced as the injury rate was very high.

To achieve minimal physical ailments and training loss to a trainee it is imperative to improve the equipment and infrastructure.

The current drill boot weighs less than 1.4kgs, its sole thickness is 3cm thus has greater absorption, designed to lower the eccentric load, is ankle high at 17cm thus reduces calf tension as well. It has an inner line, is semi curved, the socks are double layered, and the thirteen nails, for which most of us were punished, are fixed by the boot manufacturer, not with steel nails that at times bite through to hurt the user but with self-locking flowery nails. It reduces the shock that travels upwards by 1.5 times are scientifically designed such that the foot stays in its natural position with the toe forward comfortably placed. This is possible due to a 5 degree angulation of the sole of drill boot and even for the DMS so that the center of gravity is toward the body there by improving stability. The results are of courses for another study. Overall the new boot is more comfortable.

Games are an important component of training, as they develop physical fitness, camaraderie, reduce monotony and develop habit of winning and aggression. As games are high intensity in nature and individual is competing with another individual of different fitness ability and perception, it can cause injuries. Games induced injury spectrum differs from physical training induced injury. Physical training induced injuries are more of overuse injuries whereas, games induced injuries are acute in nature. To achieve minimal physical ailments and training loss to a trainee it is imperative to improve the equipment and infrastructure. A quality games shoe ensures adequate shock absorption, stability of ankle, counter anti-skid, comfort fit, durability of shoe, wash ability and breathability to allow a soldier participation in games without any hindrance where as an improper shoe will lead to undue injuries.

Game induced sports injuries are acute in nature, generally 26.4% are fracture /dislocation/contusion, 28% are soft tissue injuries like muscle strain/ laceration or abrasion, 30% injuries are joint injuries predominantly ankle and knee and 15.6% are other injuries like eye, ear dental or head injuries. This injury spectrum is absolutely different from physical training or drill induced sports injuries. Sports shoe thus need to reduce ankle sprain, have an outsole to yield adequate traction on a given surface, use of cushioned insoles resulted in significant reductions in mean vertical ground reaction force peak impact (6.8%) and ground reaction force loading rate (8.3%), as well as peak tibial acceleration (15.8%). The reduction in both the magnitude and rate of loading for the kinetic parameters achieved with over-the-counter cushioned insoles makes them a promising injury-prevention modality.

This generation bred on books and air conditioners will find it hard to live up to the challenges of rigorous training wherein time is the essence. Good shoes will cushion their entry to the army but ultimately it is the will of the man that goes on.

Different types of games require different types of games shoes. The net games like basketball, volley ball where lot of jumping and landing are involved causes lot of ankle injury. Games shoe for this group are directed towards ankle stability and shock absorption but football or hockey like ground sports require grip on the surface for sudden maneuver or change of direction, so they need spiked shoes. The game shoe introduced is with ankle support, mainly for all court games like basketball, volleyball, squash or tennis to prevent ankle injury, and sports shoe is mainly addressing running and PT to reduce stress related injury.

It thus summarizes that the running shoe should have different structures so as, and not double as a sport shoe. The outer sole can have different flexi groove which increases the flexibility of a sports shoe, while the mid sole could be made of ethylene vinyl acetate or poly urethane which are stabilizing materials. A good insole provides adequate cushioning and the external shoe structure are curved or semi curved which are good for those who run on their toes. A shoe tongue protects the foot from laces, thus the running shoe is different from the game shoe.

The young soldier of today has better means and why not he should have better equipment, but it is the schooling system which produces children wherein cut off of 100% are the order of the day. This generation bred on books and air conditioners will find it hard to live up to the challenges of rigorous training wherein time is the essence. Good shoes will cushion their entry to the army but ultimately it is the will of the man that goes on. In the meanwhile full marks to the system for correctly identifying the problem, and bringing about change, we old timers too have adapted well to the latest designer wear shoes, and can’t dream of wearing those good old canvas shoes again. We too have different shoes one for golf and one for walking.

3 thoughts on “Foot Wear for the Soldier”