author can be reached at R1rastogi@gmail.com 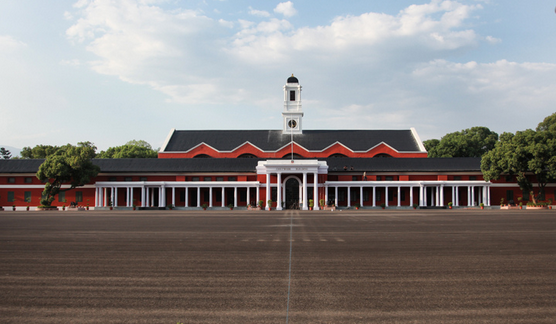 Not unlike many of you, passing through portals of the Chetwode Hall nearly half a century back was a life-changing event for me. It set our lives on a new trajectory.  Aside from a strong foundation in a military career, it installed strong values and resilience that served us well throughout our lives –  in and out of service, and beyond.

Really, what is it that we learned there?  We brought with us values, beliefs, and aspirations from our families and homes.  We drew upon a long-rich history, traditions, lessons of hard-fought battles, and tales of unmatched gallantry going back three centuries in unbroken annals of the Indian Army, which we all can be very proud of.  We learned from each other.  And, not to forget, our hard-charging drill-instructors, numerous NCOs, JCOs, and young captains, who imparted life-changing impressions with their examples and code of conduct, which forever served us as a beacon of inspiration.

We indeed went through a crucible.  Trained by the very best, to carry on and live the legacy of the finest institution in the world, barring none (I can say with a lot more conviction, now).  Our class saw action in ’71, and answered the call, in larger numbers than any.  In our lives, since that fateful day, we faced unfathomable challenges, overcame adversity, and sized opportunities.  As one who ‘got-away’, with mere 10years under my belt in uniform, and built a career and life oceans away, I have a different take, and a degree of separation and maybe objectivity(!), which can do us some good; And, I take exception to tie our core-values to FM Philip Chetwode’s utterance!

Now, I am a US citizen for over three decades.  Professionally, I had the good fortune of engaging with senior Russian and East Bloc policymakers, in scores of relationships, spanning a decade and a half.  Also, having retired five years back, and with a recent serious medical diagnosis, my views and perceptions have changed, and I see life in a different light.  I am excited about coming out to our 50th anniversary but I am skeptical if I would be able to.

Since ‘getting-out and away’, I lost contact with most of mycontemporaries  Few and infrequent contacts, sometimes by choice and other times not, were quite a shock, or even surreal!  Seeing many of in the late-60’s, while I could remember some only from the IMA days, was so hard to fathom.  It was quite unreal.  All the ordinary and extra-ordinary stuff you, my course-mates, did, big professional and personal challenges – commanding and leading a mighty army — was only a memory, a distant past, but I could see it on your faces!!

So, here I am, remembering last words etched on the wall of the Chetwode Hall, as I stepped out to the graduation parade on a chilly December 1969 morning:

Enshrined in the hallowed halls of IMA, these words have guided generations of officers and served us well.  As 20-something young officers of an equally young, new, and untested nation, we felt unsure and untested with a certain nervousness.  The last few years, 1962 hadn’t gone well, and ’65 was maybe ok, for a young and inexperienced nation.  A stellar record of the Indian Army or the British-Indian Army, history, and traditions were sorely needed to bolster our self-image, confidence, and faith in ourselves.

In last year or so, I am struck by numerous YouTube and TedTalk narrations by young and old officers, that is highly inspirational.  These youngsters and some not so young, truly show their mettle as unsung heroes in everyday army ops, as well as tales of uncommon bravery and sacrifice, without pretensions.  Yet, I am also struck by YouTube clips of Army Chiefs and senior officers citing these words as their motto.  However, I take exception to tie our motto to Chetwode.  No more!!

It is time for us to stepback and take stock.  Today’s Indian Army has a treasure-trove of rich experiences in hot-battles, low-intensity simmering warfare, actions under various degrees of hostilities, an abundance of acts of valor and bravery, at all levels.  It is time we look at ourselves in the mirror and acknowledge the legends that surround us.  Seventy years on, we are no longer an outpost of a distinct distant empire!!

There is no shortage of homegrown legends, mottos, or higher-level experiences.  The ’71 operation that I saw as a young officer, was eye-popping in scope, planning, conduct, and magnitude, but perhaps tragically highly under-rated and under-appreciated!!  I know of no other military operation todate, but one or two, with similar ramifications.  And, I am sure there are numerous home-grown folklores, sagas, and legends that should be cherished, dignified, glorified and idealized.  Let’s not kid ourselves that others (Hollywood, et al.) have not romantically embellished through rose-colored glasses, in books, media, and movies.

The world is changing much faster than we give it credit for.  Who could imagine that China would be gunning for No. 1 spot, so rapidly?  If we want to be counted for something, and measure up, we must get our act together and stop taking pride in hyphenated names, like British-India, which has no place other than in the colonial grave-yard.  Army of a sovereign nation is not beholden to no one.  So, let’s move-on, ditch Chetwodefor any of the heroes of new India, ancient India, or anything inbetween.  With 1.3 billion Indians and 5,000 years of history, we should have no shortage of desi leaders, ideals, or trailblazers.  For starters, we have our-own, 1st-course graduate, Sam Bahadur!  And many, many more!

At the 50th anniversary, rallying around, building support, and delivering on this cause can be a fitting gift to our almamater.  Since a larger number of our course-mates did not return from ’71, we have a unique privilege and duty of acknowledging that 50 years-on, the Army and IMA have earned our-own laurels of glory and sacrifices and the best can’t hold a torch to us.

I hope this is more than a belly-ache of an old, tired, retired course-mate, who can hear the distant drums.  Perhaps, it is time to act, just like we did 50 years back.  I am glad to see that for those who soldiered-on, life has been kind and good!!

  Adventures of Col. John Masters and his fascinating tales of 18th to early20th century India captivated me.  I read most of his books in my teens and knew India he loved, as a fifth-generation Gurkha officer, with a very particular perspective.  His tales of adventure (involving, independence and partition – ‘Bhawani Junction’, Great Game in Central Asia – ‘Lotus and Wind’, service with the 4th Gurkha – ‘Bugle and the Tiger’, airborne assault behind Japanese lines in Burma – ‘Road Past Mandalay’, and many others) bewitched me.  Reading Masters before joining IMA undoubtedly left a deep mark on my thinking, and eventually on joining the Gorkhas.  But, 50 yearson, on reflecting today, I see this as a highly tainted and antiquated view, which is Anglo-centric, waspy, bordering on anglophile pandering, and not reflective a mature culture, society, or country and nation, nor in touch with the times, and independent thinking.

  A few years back, while traveling through Portugal on holidays, I was struck by the good-natured and laid-back Portuguese.  The people seemed kind and without any airs, or presentations about their glorious past and colonies.  We visited Vasco-di-Gama’s grave at Jeronimo monastery, and I was appalled to learn that most Portuguese either did not care enough or even know about Goa.  In the same vein, the video https://www.youtube.com/watch?v=riE5PDSmmgc* on the absence of any memorial in contemporary Britain, on the sacrifice over 2-3 million Indian native-sepoys in WW I & II, isanything, but chilling!

  Sometimes, I wonder about IMA’s international image with a growing list of foreign cadets; and can see Chinese and US military attaches at POP with a puzzled look, or even a snicker or two.  (BTW, as a historic trivia, the boxing-rebellion, where Indian troops fought and Chinese were humiliated by the British, is a major driver in China’s rise today.)

  On a lighter note, here are my proposed names, some good and not so good, for replacement of Chetwode and his Legacy:

–          First, not so good and to be avoided: Rajiv Gandhi, Indira Gandhi, and all Gandhis of any stribe;  Mohammad. Gauri and Gazni, Aurangzeb, and even, actor Pran.

–          To be considered: Arjun, Bhim, Prithviraj Chauhan, Rana Pratap, Ranjit Singh, Shivaji, Tipu Sultan, Rani Jhansi, Razia Begum. But, since none of them went to IMA with exception of Arjun,

who perhaps was trained in Tons/Dun valley but lacks solid proof, Manekshaw, from the 1st course beats all others!!  And, also, maybe politically correct!!

(Racist Double Standards in Death, as they were in life for World war veterans of color).

One thought on “Fifty years-on, Chetwode!!…Really?…. Reminiscing My Days at IMA”