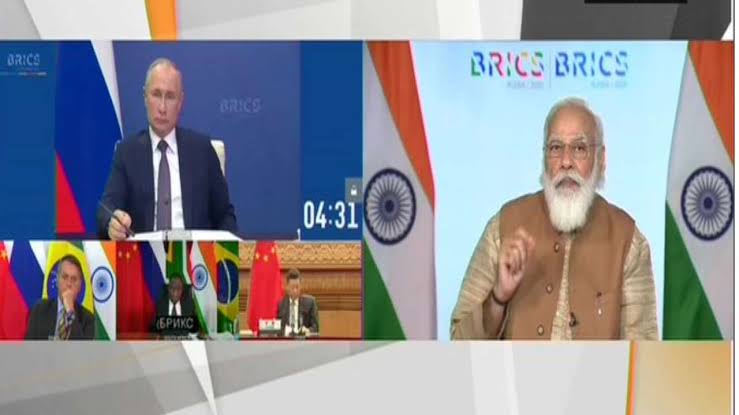 The predecessor of BRICS (Brazil, Russia, India, China, and South Africa) was BRIC (Brazil, Russia, India and China) established by Goldman Sachs in 2006. BRIC was the acronym for the four countries, which were deemed to be at a similar stage of newly advanced economic development. Behind BRIC was the idea that China and India will, by 2050, be the world’s dominant suppliers of manufactured goods, while Brazil and Russia will become dominant as suppliers of raw materials.

With induction of South Africa in December 2010, BRIC became BRICS whose original aim was the establishment of an equitable, democratic and multi-polar world order. However, some speculated BRICS had become a somewhat political organization since South Africa with a population of less than 50 million was too small compared to other BRICS members. But South Africa maintains it would ensure that the rest of the African continent is advantaged by its BRICS membership and continues to benefit from the BRICS countries in the priority areas identified by the African Union (AU) like energy, information and communications technology, rail and road infrastructure, agriculture and food security.

The BRICS mechanism aims to promote peace, security, development and cooperation. It also aims at contributing significantly to the development of humanity and establishing a more equitable and fair world. The 14th BRICS summit held on June 23-24, 2022, was under the theme “Foster High-quality BRICS Partnership, Usher in a New Era for Global Development”.

The Ukraine conflict has resulted in calls for expanding the NATO and the EU. The India, Israel, the UAE and the US (I2U2) grouping formed in 2021 has been recently energized and the US is making all out efforts to integrate with the Middle East/West Asia. While Australians are undergoing nuclear submarine courses in Britain, Ashley Tellis of Carnegie Endowment has proposed an India-France-US (INFRUS) pact, under which the US would “midwife an Indo-French arrangement” which would “help India to avail of the superb French naval nuclear propulsion technology to build up its own sea-based deterrent”. Is there any need for the US to midwife Indo-French relations or is this because of the American failure to midwife China-Taiwan relations?

In the ongoing game of groupings at the global level, it was natural that many countries would want to join BRICS, as is already happening in the Shanghai Cooperation Organization (SCO). Earlier there were reports that Armenia, Iran and Suadi Arabia were keen to join BRICS but there was no confirmation from Saudi Arabia after the visit of POTUS Joe Biden to Saudi Arabia was announced. Now Iran and Armenia have formally applied to join BRICS. Interestingly, a defence delegation from Armenia recently visited India and showed interest in India-made surveillance drones and other military hardware.  In 2020, Armenia signed a $40 million contract with India to import the Swathi weapon locating radars developed by the DRDO and Bharat Electronics Limited.

As per recent reports, Bangladesh, Indonesia, Mexico, Turkey, Egypt, Nigeria, Sudan, Syria, Saudi Arabia and Pakistan have expressed interest in membership of the BRICS. Both Argentina and Iran had confirmed their attendance at the 2022 BRICS summit upon invitation by host nation China, and applied to join the bloc as full members. Part of the declaration issued by China after the BRICS summit on June 23-24, 2022, reads, “We support promoting discussions among BRICS members on the BRICS expansion process. We stress the need to clarify the guiding principles, standards, criteria and procedures for this expansion process through Sherpas’ channel on the basis of full consultation and consensus.”

On the sidelines of the BRICS summit on June 23-24, China hosted a virtual dialogue on global development on June 24 with leaders of Algeria, Argentina, Cambodia, Egypt, Ethiopia, Fiji, Indonesia, Iran, Kazakhstan, Malaysia, Senegal, Thailand and Uzbekistan. There is speculation that Beijing could be planning to include these countries into the BRICS+ grouping.

Vyacheslav Volodin, Chairman of Russia’s State Duma told reporters on July 23 that a delegation from Russia will represent the country at the BRICS parliamentary forum in September being organized by China. he said, “In September, we are preparing to hold a BRICS parliamentary forum, this year the organizer is the National People’s Congress of the People’s Republic of China. There are a lot of issues that need to be discussed.”

The first BRICS parliamentary forum at the level of chairmen of parliaments/chambers of parliaments took place in the framework of the Russian chairmanship of the BRICS association in 2015 in Moscow. On November (24-26) 2022, Russia will host the IV International Municipal Forum of the BRICS+ countries in Saint Petersburg.

According to Alexander Bastrykin, head of the Investigative Committee of Russia, it would be more appropriate to work out with Russia’s partners in the CIS, CSTO, BRICS and SCO in the tribunal over Ukrainian politicians and the military. “The establishment of the court and its charter could be formalized by an agreement between Russia, the member countries of these organizations, the Donetsk and Lugansk people’s republics”, he said. .Bastrykin said that at the moment, the Russian investigators have opened more than 1,300 criminal cases against the Ukrainian military, politicians, radical nationalists, employees of the Ministry of Health, as well as citizens of other states.

Despite the Russia-China growing relationship, China is using its economic muscle to influence Russia the way it wants. According to a report by the Green Finance & Development Center at Shanghai’s Fudan University, Chinese funding in Russia as part of China’s One Belt, One Road global development and cooperation project dropped to zero in the first half of 2022. The data shows this reduction in investment occurred for the first time since the launch of the Chinese project in 2013. In 2021, Moscow and Beijing signed agreements worth about $2 billion.

At the BRICS Summit on July 23-24, China also announced its intention to extend the China-Pakistan Economic Corridor to Afghanistan. Grant of BRICS membership to Pakistan will enable China-Pakistan to drive their specific agendas.The bigger danger is that inclusion of large number of countries in BRICS with whom China has economic relations will not only make BRICS China-centric but Beijing will be able to break the cohesion of the organization like it has achieved in ASEAN; joint statements by ASEAN fail to name China the aggressor and criticize Chinese actions defying international norms.

It is being said that inclusion of more countries into BRICS will be by consensus and before any move is made to expand BRICS, there must be a clear definition of principles and criteria for membership. But what will be the meaning of “consensus” once BRICS is expanded? Surely the original four member countries would not have a veto-like power to block majority consensus, which implies China could manoeuver decisions to further its own national interests. That is where India must tread with caution.