Don’t over react to incidents on the LoC 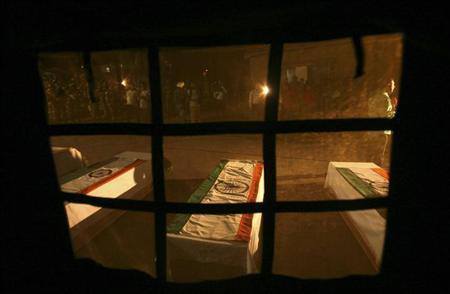 Recent incident of killing of Indian soldiers along the Loc in J and K, has been, somewhat, blown out of proportion, which could possibly impact on the efforts to improve India – Pak relations.  Such incidents or violation of peace agreement at the Loc in J and K are not uncommon. It would be grossly wrong to equate these with, say, attack on Parliament or what happened at Bombay on 26/11.  At the LoC in J and K, Indian and Pak troops are at eye ball to eye ball confrontation and often one incident leads to another; a case of action and reaction. So all this hype and ‘humgama’ in parliament, print and electronic media is a bit uncalled for.

No such activity, even by terrorists, of any hue, is possible along the LoC without the active participation of Pak troops.

Though the faux’ pas by the defence minister in parliament is one of a piece. Ambush is laid not from 20 or 40 yards distance and therefore, for that one remaining soldier hiding in the bushes to conclude, in a dark night, that those who killed his commarades were terrorists dressed in military uniform is too farfetched to swallow. Could they not be military men dressed in terrorist outfits! After all Pak army did that in 1947 and then again at Kargil. So did the defence minister of India fall into this trap, engineered by the over enthusiastic national security adviser’s team and give Pakistan a clean chit!

No such activity, even by terrorists, of any hue, is possible along the LoC without the active participation of Pak troops. However what we need to ponder over is that there may be a possible connect between the incidents and ingression along the border with Tibet by the Chinese troops and increased incidents of violation of ceasefire agreement on the LoC with Pakistan and the attack on Indian consulate in Afghanistan.

China cozening up to Pakistan in an obvious attempt to tie down India locally and the latter willingly falling into this trap, will in the long run work against Pakistan’s core interests.  China’s attempts to make Pakistan militarily match India will simply pauperise that country to no purpose. China first took the Sashgam valley from parts of J and K occupied by it and now Chinese troops and construction companies have moved into Gilgit region for building road and rail link with Gwadar port for transporting oil from the Middle East. Large scale presence of Chinese in PoK and Pakistan will have its own fallout.

Once that stock of young men from the valley was exhausted, Pak started dispatching Afghan and other terrorists  into J&K, fully assisted by its army.

For over two decades, Pakistan army has been dispatching terrorists into J and K. Further Pak army is generally more aggressive till such time it meets with a firm response. In seeking release of kidnapped daughter of Mufti Mohammad, some key terrorists in Indian prisons were released. That one act gave insurgency in J and k enormous fillip and led to a large body of young men from the valley crossing over to PoK. They received training in terrorist activities and later were sent across the LoC, in small batches, with the full support of the Pak army. Some of these groups were intercepted by Indian troops and yet some did manage to sneak into the valley. Once that stock of young men from the valley was exhausted, Pak started dispatching Afghan and other terrorists  into J and K, fully assisted by its army.

The policy of promoting terrorism and nurturing terrorist groups by Pakistan and this policy and move has finally recoiled on that country itself. It is a case of chickens coming home to roost. Pakistan has become a major target of terrorist groups. The country’s economy has been ruined and worldwide, its reputation as a terrorist state stands established. Pakistan’s Kashmir policy has been seriously flawed and it has done that country enormous damage. Pakistan’s efforts to match India in military strength is imposing unbearable economic cost on that country and yet getting it nowhere. The illusion of what it calls, ‘strategic depth’ against India by having a friendly and pliable political set-up in Afghanistan has no practical application. Pakistan need have no fear of India, because the latter is fully alive to the fact that a stable and prosperous Pakistan is in this country’s best interests.

Some TV channel anchors have been going overboard, whereas they need to exercise restrain and bring some sanity, objectivity and order in debates. Representatives of political parties merely spit venom against each other’s parties and the debates end up in ‘Maen maen and tuu tuu.’  Unfortunately some of our defence experts too are rather aggressive and over bearing and eventually render disservice to own cause. Impolite and provocative language does not further their arguments. At the LoC, our commanders must avoid all such actions that could possibly provoke the opponent and yet be firm and remain vigilant at all times.

India continues to import almost 70 percent of its defence equipment, which puts added burden on the economy and foreign exchange reserves.

We need to retain balance and not renege on our efforts to improve relations with Pakistan. So there is no sense in canceling the forthcoming meeting of our PM with his counter in Pakistan on their side line of UN session. Yet the preamble of every dialogue with Pakistan must demand end of export of terrorism to India and violations of peace agreement along the LoC, and made known that only then can we enter into any useful dialogue on core issues and hope for progress on the pending problems. Pakistan is hopefully on the mend and let us, not only give their prime minister a chance to consolidate his position, but extend a helping hand. While it is possible to change policies but neighbours can’t be changed.  Pakistan, in own interest, must end its journey down the terrorist lane, retrace those dangerous steps and focus on more pressing problems of poverty, health care and education etc.

India has been singularly unfortunate in its defence ministers.  Starting with Krishna Menon and except for short periods when Arun singh (though a minister of state but was infact de facto de ju-re defence minister ) and Jaswant Singh were in that chair, it has been a dismal scene. The present defence minister, during his long tenure, has successfully brought military’s modernization to a halt, instead of putting right procedures in place to end defence scams, has been black listing company after foreign company. His DRDO has delivered nothing and is presently struggling to develop a humble rifle, which too may have to finally imported.  Indian military deserves to have a defence minister who has atleast some elementary knowledge of national security issues, whose conversation can be deciphered, who can keep up the morale of serving and the retired and can give push to indigenous defence industry.  India continues to import almost 70 percent of its defence equipment, which puts added burden on the economy and foreign exchange reserves.