DefExpo Day-1: Impressions of a Soldier... 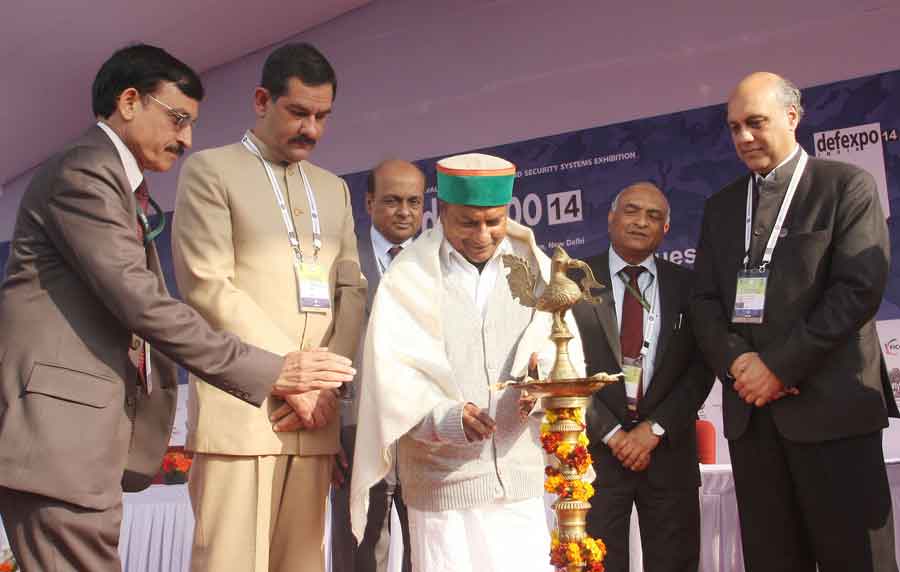 In these testing times the overall Armed Forces modernisation process is facing a tough challenge. In this backdrop when DPP 2013 has not proved to be an enabler, the Defexpo 2014 opened at Pragati Maidan, New Delhi on Feb 06. There was a cautious optimism in the air. But then the Defexpo in the capital is an indication of that there still is a desire to modernise and many international players see India as a major potential to do business with.

Antony informed that the MMRC deal is in progress and ruled out any suggestions towards derailment of the deal.

The Indian Defence Minister inaugurated the event that will be continuing till the Feb 09. In his press conference at the media centre I asked him a question:  Over the past few years we have seen that India has been on an overdrive to black list foreign arms companies. Has the desire to achieve greater transparency and higher probity harmed India armed forces in capacity building?  To this the Defence minister replied and he said, the malpractices and corruption might have delayed the procurement process, nevertheless we have been able to streamline the system. India has given a clear cut signal to the foreign player that there exists no tolerance to corruption. The set back to modernisation that has taken place recently but will be short lived. Gone are the days when defence budget use to get surrendered. In this financial year we have already expended 92% only 8% remains balance in the last two months. He said there will however be no comprise on transparency.

To various questions that were posed to him he appeared very candid. He informed that the MMRC deal is in progress and ruled out any suggestions towards derailment of the deal. He reiterated that system has been cleaned up to a very large extent and it should be noted that all the defence procurement deals are based upon professional assessment rather than any political decisions. Since we do not ignore any complaint and go into all the details, it is this very reason that a few issues have got highlighted in the recent past in media. India is facing difficult financial situation in the current times which has affected the payment schedules of major procurements hence there appears a delay. He assured that the situation will improve in the next financial year.

…wondered as to why we in the Infantry are still so poorly equipped when there is such a fantastic array of inventory available under the category.

Amongst the visitors there was a large presence of serving defence personnel. I could establish a clear cut distinction in the approach of the Army, Navy and the Air Force personnel. While the efforts by the officers from the Army and the Air Force appeared as an individual approach, the Naval officers were seen approaching the available weapon systems and technology with a more professional organisational outlook. They were seen moving as a team seeking knowledge and experience in a much more organised fashion. On almost all the stalls there were retired officers from the Indian Armed Forces. It goes to say that the expertise available as domain specialised has been tapped by various national and international players appropriately. However in the seminar held in the later part of the day at media centre on defence production and Indigenisation and earlier during the day,in the Defence Minister’s press conference I was literally dismayed at the sight of bureaucrats who occupied the centre stage and there was not a single representative from the Armed Forces. I am very sure they had the least of the expertise available in the country over the defence related matters. No wonder there is total disarray in planning and execution of plans to modernisation of our armed forces and the turf war continues to deny India the creation of CDS which is the need of an hour.

As a former soldier what made me feel proud was a vast participation of Indian firms displaying indigenous equipment. Mahindra and the TATAs were the attraction to many apart from the displayed equipment by the DRDO.  There was a vast variety of small arms. I wondered as to why we in the Infantry are still so poorly equipped when there is such a fantastic array of inventory available under the category. Colt and Berretta were some of the stalls that one must visit if he had an inclination towards the latest polymers technology along with modular and compact small arms weapon systems.

One thought on “DefExpo Day-1: Impressions of a Soldier…”