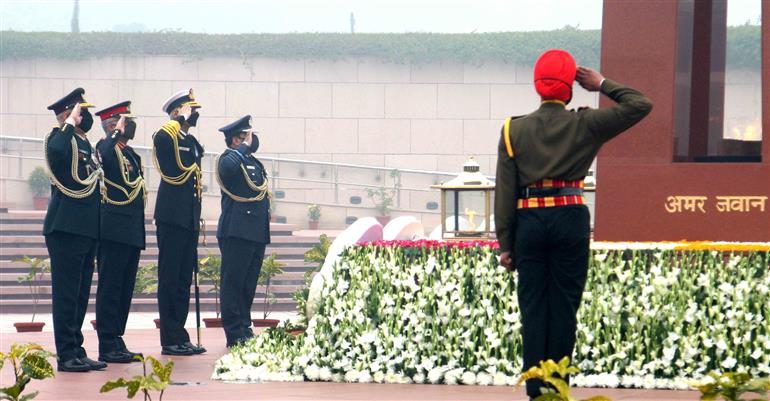 The Chief of Defence Staff (CDS), General Bipin Rawat, the Chief of the Army Staff, General Manoj Mukund Naravane, the Chief of Naval Staff, Admiral Karambir Singh and the Chief of the Air Staff, Air Chief Marshal R.K.S. Bhadauria paying homage at the National War Memorial, on the occasion of Army Day, in New Delhi on January 15, 2021.

Army Day is celebrated in India on 15th of January every year to commemorate a historic event post independence in January 1949 when Gen. KM Cariappa became the first Indian to assume the Command of the Indian Army. The celebration commemorates yet another turn of historic event when India got rid of British Generals. Gen, later Field Marshal KM Cariappa became the first Commander-in-Chief of the Indian Army after taking over from last British C-in-C Sir Francis Butcher.

The day is celebrated in the form of Ceremonial Parade accompanied with other military events/shows in national capital Delhi as well as at all Command Headquarters. On this remarkable day Indian Army rededicates itself to become an important part of nation’s ‘War Winning Team’. The day begins with paying homage to the martyred soldiers at the National War Memorial at the India Gate, New Delhi. It is followed by ceremonial parades and many military shows which feature the technological achievements in the Army. The Army Day parade is typically held at Cariappa Parade Ground, Delhi Cantonment Delhi as a gala ceremonial event every year. Army Chief’s Unit Citations and Sena Medals are presented for gallantry on this occasion. Basically it is a grand celebration of Indian’s military might and glory of its unsung heroes. Army Day Parade enlightens people in the ability of its army in defending them and provides them with every knowledge of the activities it performs. Army Day Parade inspires youngsters to come up for serving the Country.

This time 73rd Army Day will be celebrated to salute the valiant soldiers, particularly Galwan Warriors, who sacrificed their lives to protect the country and its citizens and those who are doing the same presently, mostly to those who are guarding our frontiers. Param Vir Chakra and Ashok Chakra awardees also participate in the Army Day Parade to display their individual glory every year. (Notable to remind the readers that last year Army Day Parade was commanded by Capt Tania Shergil. She became the first Lady Officer to command an Army Day Parade). On the Army Day, all kinds of military hardware and equipment are displayed as a part of the celebration. One of the objectives of Army Day Celebration is to display all the arms and ammunition to exhibit India’s might.

This year army’s grandest ceremonial event is being curtailed because of the Covid-19 Pandemic. All the functions will be muted because of the restrictions imposed by the Govt to check the spread of the disease. Hence Army Day Parade 2021 will be shorter, involving lesser participants and much lesser number of spectators.

Indian Army is known as ‘war winning machine’. Look around any army of countries around us or anywhere in the world and one would find that Indian army is most professional and best disciplined. It is the army which operate in all type of terrain, climatic conditions and weather, in India and abroad.

No matter how hi-tech the modern battlefield gets, no matter how powerful the aircrafts, drones and the robots come, mission of the army will continue to be to close-in and destroy the enemy, even by close quarter’s violent combat, if the need arose, in any and every war and then physically hold the ground. Glimpses of all this the nation saw at Galwan on 15 June 2020. In Himalayas, as we see, the army is simply indispensable. Therefore, the importance of army will remain forever because nation will continue to need ‘boots on the ground’. Due to the intrinsic nature of their duty, day and night, soldiers will continue to be sought-after. Being an army veteran, I am proud of this fact.

Being an Infantry veteran, I am duty bound to talk about the Infantry which is a major component of the army fighting force. Colloquially an Infantryman is called ‘Bhoop Singh’. It is because he is considered to be an average soldier. This is the biggest folly we make. Considering him as simply ‘non-technical’ Bhoop Singh is perhaps the legacy of the era of the yore. But more than that is the reason that despite his multiple skills and specialisation, the infantry soldier does not indulge in self aggrandizement, which is a rare virtue. That is why the immortal saying, “When it was victory, the Cavalier claimed it outright, the Gunner boasted of his caliber, but the Infantryman stood silent with victory at his feet.” But today the army (infantry being its major wing) has become a far more sophisticated outfit in recent years since military technology, techniques and tactics have advanced. Today a soldier handles different weapons and missiles, high frequency radio communication equipments, state of the art surveillance and monitoring equipment, fifth generation navigating equipment etc.

Most notable traits of the soldier are; physical fitness, excellent communication skills, ability to think and act fast and stay cool under pressure, capacity of taking and obeying orders, teamwork, self-discipline, self-confidence, initiative and ability to learn local language and customs where posted. That is why officers and men are retired at an very young age even though they are denied of service and financial benefits like their paramilitary counterparts.

Soldiering is not an easy job. It needs extreme courage, grit and determination to serve in the army. Not many would be aware of the risks and tribulations the soldiers face from the biting cold in difficult areas and inhospitable terrain such as of Himalayas. Many a time soldiers may have to share same habitat with sick/dead colleagues for days because of weather and visibility conditions not permitting air evacuation. Soldiers are swallowed by crevasses that suddenly open along a beaten route. Some bodies get recovered next summer with skin peeling-of. Soldiers get buried in avalanches. Patrols caught in sudden blizzards getting chilblains even in eyes. Limbs are lost due to frost bite. India’s wars with Pakistan and China and the never ending counter insurgency/ counter terrorist operations tell this all. But what people witness as a spectator is the army’s good life, smart and well turned out officers and men, parties and club life, fun and moving around in military vehicles. But what they don’t see are the sacrifices soldiers and their families make. For someone who has always been brought up in the warmth of parents, maintaining a long distance relationship is like walking on a thin thread. Each life has its own share of ups and downs, but army’s adventure is definitely not for the weak-hearted.

What armies mean to a nation and what their contribution is in defending the nation, is pitiably understood little less in India whether in peace, no war no peace, or in war. One example of this peculiarity is Delhi High Court’s order to Delhi Govt to give insurance cover to 29,000 lawyers who earn lakhs and Centre granting free insurance to doctors combating Covid-19 including those earning lakhs every month in private hospitals while the army soldier guarding the nation pays for his own insurance which is deducted from his salary every month.

Let us all pay homage to the brave soldiers who have laid down their lives in service of the nation on this day and celebrate this Army Day as tribute to the soldiers who are all set to teach PLA another lesson, more severe than the Galwan clash.