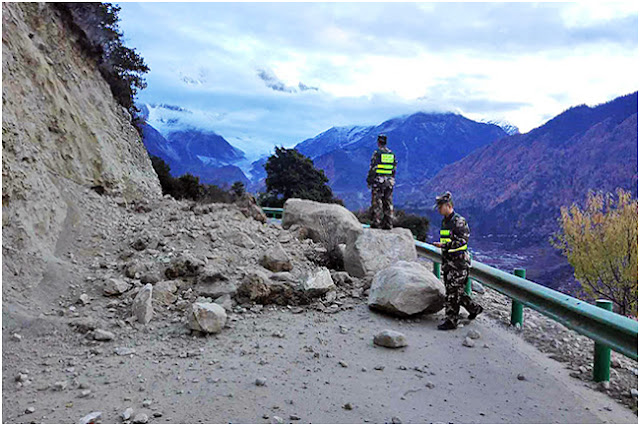 During the recently held 7th Tibet Work Forum, President Xi Jinping pointed out that “protecting the ecology of the Qinghai-Tibet Plateau is the greatest contribution to the survival and development of the Chinese nation.”

He said: “We must firmly establish the concept that green waters and green mountains are golden mountains and silver mountains, adhere to the attitude of being responsible for history, people, and the world, put the construction of ecological civilization in a more prominent position, and protect the life and trees of the plateau, the thousands of waters and mountains, and the Qinghai-Tibet The plateau has been built into a national and even international ecological civilization highland.”

Environment was one of his ‘Ten Musts’ for Tibet.

He further observed: “It is necessary to further advance the scientific investigation work of the Qinghai-Tibet Plateau, reveal the mechanism of environmental changes, accurately grasp the impact of global climate change and human activities on the Qinghai-Tibet Plateau, and study and propose systematic plans and engineering measures for protection, restoration, and governance.”

He concluded: “It is necessary to improve the compensation method, promote the integration of ecological protection and the improvement of people’s livelihood, better mobilize the polarities of all parties, and form a virtuous cycle long-term mechanism for building a good ecology and sharing a good life. It is necessary to strengthen the construction of border areas and adopt special support policies to help border residents improve their production and living conditions and solve their worries.”

Good, you may think!

But what about the mega hydropower plant (HPP) which will bring havoc in the pristine region of Pemakoe, near the Indian border?

Has the Chinese engineers forgotten that the area is earthquake prone and landslides are a regular feature?

Here is a text published inThe Time in London describing the August 15, 1950 earthquake, which had its epicenter in Rima in Tibet, just north of the McMahon Line in the Lohit Valley:

Seismographs the world over one day last fortnight registered an earthquake so violent that the record of its convulsions ran off the paper. Because of the incomplete recordings, seismologists were unable at first to determine the quake’s location, later reckoned that it must have hit hardest in southeastern Tibet and in northern Assam (a province of India). Communications with this wild mountain region, always poor, had stopped abruptly; the extent of the damage done by the quake could only be guessed at. By last week, frightening evidence of the quake’s dreadful work in Assam had begun to reach the outer world. Shipping on the lower Brahmaputra River (whose source is in the Himalayas) was dislocated by a tide of tens of thousands of uprooted trees and the bodies of tigers, elephants and other wild life borne down the river from the earthquake area. The waters of the Brahmaputra, blackened with sulphur that the quake had churned up from the earth’s innards, cast up millions of dead and dying fish. Up in the mountains the river had been dammed by landslides. …Thousands of people and cattle were marooned on islands in flooded areas. Brahmin priests performed propitiation ceremonies to the goddess of earth and the god of destruction. The quake had not yet spent itself. Hills were still disappearing and new hills were rising out of the laboring earth. Peasants in the area sat in numb and sleepless terror, watching tumblers half-filled with water for signs of further tremors. At the slightest trembling of the water, they would rush frantically to open ground. At week’s end New Delhi heard that the death toll was close to 5,000.”

The entire area north of Arunachal Pradesh is one of the most seismic regions in the world. To build such a mega HPP in this area seems sheared madness.

In November 2017, an earthquake shook the area around Mt Namcha Barwa, near the Great Bend:  as a result, the Siang suddenly became black.

An excellent article (‘Muddy Siang is sign of danger ahead, wake up call for Indian authorities’) described the developments on the Yarlung Tsangpo/Siang/ Brahmaputra. It was published by the South Asia Network on Dams, Rivers and People (SANDRP).

It says: “The current ongoing episode of Muddy Siang River water in Arunachal Pradesh is due to landslides in the upstream Tibet, triggered by the earthquakes starting on Nov 17, 2017 or possibly earlier. This is revealed by the satellite pictures and work of two researchers, first published in Arunachal Times on Dec 21, 2017. These landslides are partly blocking the Siang flow and could lead to massive floods in the downstream Arunachal Pradesh and Assam any day.”

Why the Chinese officials kept quiet for weeks, if it was ‘only’ a simple earthquake and why India remained ‘unaware’, when it was not too difficult to ‘know’ the facts with remote satellite imagery.

SANDRP questioned the role of the Indian officials in this.

According to the report quoted by SANDRP, a huge amount of debris accumulated and blocked three locations, forming natural dams on the river across a 12-kilometre stretch in Tibet. It was cause by a 6.4 (or 6.9) earthquake in the Great Bend region. It darkened the waters of the Yarlung Tsangpo.

It was already known by the end of November 2017 that the area near the Great Bend had been affected by an earthquake; Xinhua quoting the China Earthquake Networks Center (CENC) reported that no casualty had occurred “after a 6.9-magnitude earthquake hit Nyingchi, southwest China’s Tibet Autonomous Region at 6:34 a.m. on November 18.”

The agency added that the quake caused “power failures and building damages in a number of villages in [around] the epicenter in Nyingchi City.”

The epicenter was located at 29.75 degrees north latitude and 95.02 degrees east longitude; it struck at a depth of about 10 km and several minor aftershocks were felt.

Xinhua quoted Pasang Tsering, Communist Party chief in Tashigang Village of Lunang Township, saying that he could not stand still in his house when the quake struck: “Six houses in his village had damages from the jolt.”

According to the Chinese press agency: “The small town is 3,300 meters above the sea level and is surrounded by Yarlung Tsangpo Grand Canyon, Mt Namcha Barwa and many other scenic spots. It is known as the most beautiful town in Nyingchi.”

The state of the ‘new’ town was not made public.

Weeks later, Hua Chunying, the Chinese foreign ministry spokesperson, admitted that China was ready to “maintain communication with India over the transboundary rivers in the wake of lakes and dams being formed on the Yarlung Tsangpo due to earthquakes in Tibet”.

Ms Hua stated: “According to verification by the relevant authorities, I can tell you that this lake is to the east section of the China-India boundary. It is caused by natural factors, it is not man-made.” She added: “I noticed that Indian professional authorities have made an analysis and clarification on this. We hope the Indian media will not make a groundless speculation on this and the Chinese side will, through the existing channels, maintain communication with the Indian side on the cross-border rivers.”

The fact remains that the area is highly earthquake-prone and that China shares information with India only when it is compelled to.

Construction of the proposed railway between Sichuan and Tibet and a mega HPP could lead to similar disasters; ultimately, Arunachal Pradesh and Assam will have to bear the brunt of the destruction.

Happenings on the Tibetan plateau have serious implications for India; this is the case of the devastating landslide on the Yarlung Tsangpo in 2018.

On October 17, 2018, China Xinhua News twitted: “A barrier lake has formed after a landslide hit the Yarlung Tsangpo River in SW China’s Tibet on Wednesday morning. The safe evacuation of local residents is being carried out.”

On October 11, Xinhua had reported that a ‘barrier lake’ had formed on a section of another river, the Upper Yangtze (Jinsha River in Chinese); the mishap was due a landslide which had taken place in Jomda county of Chamdo prefecture in the Tibet Autonomous Region.

Though no casualties were reported, the amount of water in the new lake reached about 100 million cubic metres in a short time.

Ten of thousands of people were evacuated by precaution.

The Chinese media affirmed: “the scale of the landslide is vast, clogging the main waterway of the Jinsha River, with several bridges, fields and villages affected.”

Six days later, Xinhua mentioned the formation of a new lake on the Yarlung Tsangpo, not far from the Great Bend of the river due to another landslide: “A barrier lake has formed after a landslide struck a section of the Brahmaputra Valley near Pe Village of Mainling County,” said The Telegraph.

Pe (or Pai) is the departure point of the diversion for the mega HPP (and the new highway to Metok), where the landslide has taken place in 2018.

All this raised serious worries in India.

Xinhua commented that China (read Tibet) was one of the most disaster-prone countries in the world. “…But its overall capability to respond to such extreme conditions is still relatively weak, and more should be done.”

An article in The Wall Street Journal indicated that a serious debate had been raging in the Middle Kingdom and Beijing was trying “to kick its habit of using big-ticket infrastructure spending to fuel the economy, a turning point from a growth model…”

However today, it is the Emperor who decides of everything.

Apart from the environmental problem in these ecologically-fragile areas, the other issue is: who will pay the cost of these pharaonic schemes?

And one of the questions never mentioned in the Chinese press is: can Beijing afford these mega projects today?

The 2018 landslides are an example of what could (will) happen if a mega HHP is constructed in this fragile zone, however a more ‘ecological’ approach is bound to drastically increase the cost of the project.

The cost factor can’t be neglected.

For India downstream, the 2017 and 2018 happenings on the Yarlung Tsangpo (and the Yangtze) are truly worrisome.

Is Xi ready to practice what he preaches (particularly at the 7th Tibet Work Forum? Future will tell us.

One thought on “Creating Havoc In Tibet And Downstream”