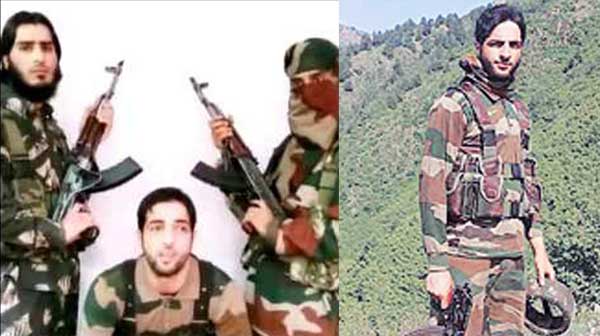 Pakistan has, of late, launched a propaganda campaign designed to attract Kashmir youth towards the path of terrorism by spread of misinformation through the social media. Burhan Muzaffar Wani, a terrorist aligned with the Hizbul Mujahedeen (HM) and functioning in South Kashmir posted a video on a Face Book page about a month back. He was seen with eleven other terrorists of the same organisation dressed in army pattern combat fatigues, clicking photos and smiling into the camera with Burhan in the middle of the group.

This campaign by Burhan is being supported with stories of policemen running away from the force to join the HM. It is surprising that the Indian authorities are not countering this blatant misinformation with facts.

The Indian television news channels picked up the video and went into sensationalist overdrive. The incident was played over and over again with comments coming from many defence analysts, social activist and others.

The terror organisations based in Pakistan smelled a media coup and gave a go ahead for all out exploitation of the same. One more video of Burhan Wani meeting fellow terrorist with a hug and holding sophisticated weaponry with Grenades went viral. Indian news channels, once again, relayed the same religiously.

Print media was inundated with articles speaking of the Intelligence Bureau being worried and anxious; 60 youth, mostly educated, joining the HM after being motivated by Burhan Wani etc. Many of these articles were planted by the terrorist establishments through their agents in Jammu and Kashmir. The matter was widely circulated on the internet.

Burhan Wani suddenly became less terrorist commander and more poster boy of the HM. In a latest video he is seen exhorting the police personnel and Special Police Officers of the state to leave service and join the ranks of the HM to “fight for their land.”   This campaign by Burhan is being supported with stories of policemen running away from the force to join the HM.

It is surprising that the Indian authorities are not countering this blatant misinformation with facts.

The fact is that indoctrination of Kashmir youth towards the path of terrorism is on the decline. Only 160 boys have joined terrorist ranks from 2010 to 2015 as against 651 in 2005-2010. When seen against the backdrop of the thousands who crossed over to Pakistan Occupied Kashmir (POK) during peak insurgency, this influx is not even a pin prick for the security forces.

One is not implying that the drift toward terrorism by the Kashmir youth is not a cause of worry. It is the duty of the government to ensure that not even one Kashmiri youth is misguided into following the path of violence.

The government, in a counter information campaign, needs to highlight the plight of those who crossed over to POK more than two decades back and have now become homeless refugees. They are desperate to get back to their homes along with the families that they have reared in POK but are unable to do so. Those unfortunate young boys who are now being misled to take the path of terrorism should be exhorted to learn from the mistakes committed by their elder generations reconsider their decision. They need to be made to understand that the path that they have chosen will lead to sure death and that too for no worthwhile purpose.

It is also necessary to expose the Pakistani design behind this propaganda campaign. Pakistan is now realising that it will not be able to sustain terrorism in Jammu and Kashmir from across the border for long. Successful infiltration is decreasing by the day and the number of foreign terrorists operating on the soil of Jammu and Kashmir is fast dwindling; it is now less than forty percent of the total terrorist strength operating in the state.

Pakistan can keep the so-called insurgency (under the garb of terrorism) alive only by recruitment of local cadre. Naturally, it is employing all possible means towards this end. The likes of Burhan Wani attracting gullible youth is one potent tool being used. The other is money and assurances of a good future in this world and beyond.

Burhan Wani is being projected like larger than life terrorist commander; the fact is that he and his associates in the videos measure poorly in comparison with the top the commanders of yore. They are young boys who look weak and effeminate when compared to the foreign terrorists who held sway earlier.

Media is a very important aspect when dealing with foreign sponsored propaganda. It is important for media to highlight the dangerous design of the likes of Burhan Wani.

These boys should realise that if the security forces could neutralise the far stronger, better trained and committed terrorists, they stannd no chance whatsoever. Burhan Wani’s brother has already paid the price of associating with him with his life, how much more pain will he cause to his family is something that he has to decide.

The debate that Indian media is generating about Burhan and his associates representing a new face of terrorism in the Kashmir valley is totally off the mark. Security forces in Jammu and Kashmir are well in control of the situation. Both terrorism and infiltration are on the decline and the likes of Burhan cannot change the circumstances in their favour.

There is, nevertheless, a need to remain vigilant and counter all designs and methods that the enemy can come up with to keep its nefarious agenda alive,

Media is a very important aspect when dealing with foreign sponsored propaganda. It is important for media to highlight the dangerous design of the likes of Burhan Wani. It has to be ensure that misinformation is exposed and the actual situation is brought to light. To glorify criminals in the eyes of gullible youth does not serve the purpose of the nation. The government also needs to realise that the terrorist agenda is now on a different level and the time has come to apply a counter strategy that is more in tune with the times.