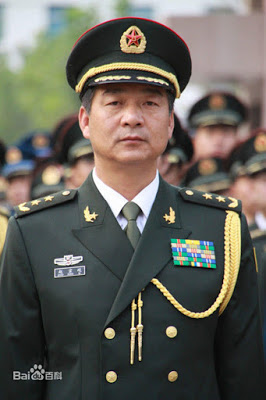 Xi Jinping, chairman of the Central Military Commission (CMC) promoted four military and one armed police officer to the rank of full general (Three Star) in Beijing on December 18.

The new generals were presented Certificates of the Order promoting them to the rank of general by the Chairman; Three-Star general is the highest rank in the PLA.

The promoted officers are the Political Commissar (PC) of the CMC Logistic Support Department Guo Puxiao, the Commander of the Western Theater Command (WTC) of the People’s Liberation Army (PLA) Zhang Xudong, the Political Commissar of the PLA’s Strategic Support Force Li Wei, and the new Commander of the People’s Armed Police Force (PAP) Wang Chunning.

During the ceremony, Xu Qiliang, the CMC vice chairman, announced the orders of promotion signed by Xi and Xu’s colleague, Zhang Youxia presided over the ceremony.

The big news is that Gen Zhao Zongqi, who triggered the Doklam incident and probably started the present Chinese ‘misadventure’ in Ladakh seems now out of the picture.

If confirmed, this is certainly a good thing for India as Zhao has been a hardliner, wanted to teach India lessons.

He is replaced by a rather unknown officer who has never set a foot in the WTC.

It is too early to say what it means for the future negotiations in Ladakh, but it probably indicates that Beijing will be more ‘flexible’.

Gen Zhang Xudong, who replaces Zhao has no experience of the Indian border; as a result he may follow what he will be told to do by the Central Military Commission (CMC) and his boss (Xi).

It might help Beijing to be more flexible on the border, particularly during the talks on the shores of Pangong tso; though ‘flexibility’ is not Beijing’s forte and whenever the Communist regime has been ‘flexible’ in the past, it was to better rebound.

Incidentally, it is the first time that a Commander of the WTC (and earlier the Chengdu and Lanzhou Military Regions) has no experience/knowledge of the Indian border.

It probably means that Chengdu, the WTC seat, will be sidelined and orders will come directly from the CMC and the PLA Army (Ground Force) in Beijing.

Who is Gen Zhang Xudong?

Zhang Xudong is the WTC’s 2nd Commander (in 2016, the Lanzhou and Chengdu MR were merged and became the WTC).

As mentioned, on December 18, 2020, Zhang was appointed to replace Gen Zhao Zongqi, the ‘father’ of Doklam episode.

Gen Zhang is born in March 1962 in Liaoning Province.

Like all the PLA generals, he is from the Han Nationality.

Zhang Xudong served in the Shenyang Military Region for a long time and was successively Commander of the 39th Group Army and the Chief of Staff of the 39th Army Group.

On October 1, 2019, he served as the deputy commander-in-chief of the military parade in celebration of the 70th anniversary of the founding of the People’s Republic of China. He may have been noticed by the Emperor at that time.

When Zhang was transferred to Chengdu as WTC commander (probably a few weeks ago), Gen Zhao Zongqi had already crossed the retirement age since April 2020, (that is perhaps the reason why he started the Ladakh operations, hoping for a promotion in the CMC).

The question is why Gen Zhang, an officer without any experience of the WTC, particularly of the border with India, where one lakh of jawans are facing each other in the harsh Himalayan winter, was selected to replace Zhao Zongqui who had 20 years of experience in the Tibet Ministry District (TMD) and had walked every inch of the frontier.

Chairman Xi wanted probably to remove a hardliner who had already created trouble for the Emperor during the Doklam confrontation. It is one possibility.

It should be noted that Gen Zhang is not a member of the Central Committee or the National People’s Congress. It means that he had no ‘political’ exposure like his predecessor.

Another promoted officer has been actively associated with the WTC and the Ladakh border; it is General Li Wei who is currently the third PC of the Chinese PLA Strategic Support Force (PLASSF).

He is a representative of the 13th National People’s Congress.

He has been the head of the cadre department of the Political Department of the Lanzhou Military Region and later the commander of the 6th Independent Mechanized Infantry Division of the Southern Xinjiang Military District (SXMD) facing Ladakh.

In January 2007, he served as director of the Political Department of the 47th Group Army’s Ground Force and in 2010, became deputy PC of the 47th Army.

In October 2012, he was transferred as PC of the SXMD and a year later PC of the 21st Group Army’s Ground Force.

In December 2014, Liu Lei became the PC of the Xinjiang Military Region (XMD).

From July 2015, he served in and out as a member of the Standing Committee of the Xinjiang Uygur Autonomous Region Party.

As a result of his transfer to the PLASSF, the XMD has no PC. A new incumbent will probably be announced in the coming weeks. This has to be watched.

A native of Muping, Shandong, Wang is born in March 1963 in Nanjing.

He was promoted to the rank of major general in 2011 and lieutenant general in July 2017.

He is the son of Wang Yongming, the former deputy PC of the former Nanjing Military Region.

He is an alternate member of the 19th Central Committee (CC) of the Communist Party of China.

In 2009, he became Chief of Staff of the First Army’s Ground Force.

From 2010 to 2014, he was deputy commander of the First Army’s Ground Force (during which he served as deputy chief of staff of the East China Sea Fleet of the Navy).

From January to May 2020, he was a member of the Standing Committee of the Beijing Municipal Committee.

In April 2020, he was transferred as Chief of Staff of the PAP. His promotion has been rather quick.

Guo Puxiao or Guo Pu is a native of Yaoxian County, Shaanxi; he is born in 1964.

He is a general of the People’s Liberation Army Air Force (PLAAF).

He served as the PC of the Urumqi Air Force Command Post, PC of the 37th Air Division, and the director of the Political Department of the 15th Airborne Corps.

He has therefore a connection with the Ladakh border.

In July 2018, he was promoted to the rank of lieutenant general.

In December 2019, he was transferred to the PC of the Logistics Support Department of the Central Military Commission (CMC).

He is the second PC of the PLA Rocket Force (PLARF). He took over the post in July 2020.

He is born in October 1960 in Rushan, Shandong Province.

In May 2009, he was transferred as Director of the Political Department of the Group Army and in 2013, promoted as PC of the 20th Army. In October 2014, Xu Zhongbo was transferred to the 54th Army.

In February 2016, he got a promotion and became PC of the WTC (Ground Force).

In October 2017, he was elected as an alternate member of the 19th Central Committee.

From December 2017, he served as the PC of the Joint Logistics Support Force (JLSF) and in July 2020, became PC of the Rocket Army.

Though it might be too early to draw definite conclusions, it is a fact that for the first time an officer without any first-hand knowledge of the Region/Command has taken over. It seems a deliberate choice by Chairman Xi.

With the transfer of Gen Li Wei, the XMD has no PC; further no news has come out on Gen Liu Wanglong, the XMD commander for a long time. Is he still around?

Another mystery, who is the PC of the SXMD?

Has Maj Gen Liu Lin (he should have been promoted Lt Gen since a long time to interact with the Indian Corps Commander) a counterpart PC in the SXMD?

All this is rather strange to say the least.

What’s cooking in the WTC? India should watch.