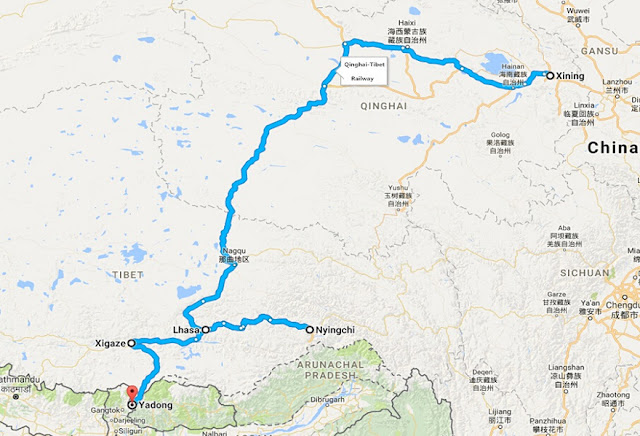 The People’s Liberation Army (PLA) walked into Lhasa, the Tibetan capital, in September 1951. Immediately, the generals leading the ‘Liberation of Tibet’ put their troops to work; they had to build motorable roads on two main axes, Lhasa-Sichuan and Lhasa-Qinghai, as well as on feeder roads towards India’s border, particularly the southern route, Lhasa-Gyantse-Yatung, near the Sikkim border. The PLA managed this feat in five years.

Since a few years, Beijing seems to be caught by a comparable frenzy, but this time, it is trains that China is planning to bring onto the Tibetan plateau; the Communist leadership noticed the success of the Qinghai-Lhasa railway which reached Lhasa in July 2006, for developing the plateau, as importantly, ‘stabilizing’ the restive Tibetan populations …and defending the borders against India.

On July 9, Xinhua announced: “The building of the Sichuan-Tibet railway is picking up steam, with construction work on nine new stations on the Lhasa-Nyingchi section in the Tibet autonomous region to begin soon.”

Let us not forget that Nyingchi prefecture faces Arunachal Pradesh.

The laying of track on the 435-kilometer line is the easiest part of the Sichuan-Tibet railway; Xinhua said that “trains travelling at 160 kilometres per hour are expected to begin running by 2021.

The news agency further explained that the Sichuan-Tibet railway was first proposed more than a century ago, “the idea was revived after the foundation of the People’s Republic of China in 1949, but various hurdles prevented it from progressing.”

Today trains are already running on the section between Chengdu and Ya’an in Sichuan province.

The toughest and most strategic section (and worrying for India as it can bring troop reinforcement in a short time to any Himalayan front) is from Ya’an to Nyingchi, “one of the world’s most challenging railway projects because it winds through the Sichuan Basin, Yunnan-Guizhou Plateau and Qinghai-Tibet Plateau, climbing from 600 meters above sea level to nearly 4,500 meters.”

According to Peng Qinghua, Sichuan’s Communist Party Secretary, “Bridges and tunnels will cover over 90 percent of the line, which means there will be nearly 800 km of tunnels and more than 100 km of bridges.”  It is hard to believe. Can China succeed is another question.

In the meantime, China is building a railway line to Nepal which will reach Kathmandu in a few years.

The think tank The Third Pole questioned: “China-Nepal railway: fantasy or reality?” The reporter noted: “The world’s toughest rail route, from Kerung (or Kyirong) in Tibet to Kathmandu, is struggling to get off the ground amid growing fears of debt, earthquakes and benefits bypassing local communities.

In Rasuwa Gadhi, the small village located at the Nepal-China border, 170 kilometres north of Kathmandu, Chinese workers are already busy building a bridge that will link the two countries. The article observed: “The border only opened after the devastating Nepal earthquake in 2015 led to China closing the badly damaged Kodari route. It is also where the new railway will enter Nepal from Tibet;” it further commented: “locals have dubbed the project kagat ko rail (paper railway) and sapana ko rail (dream railway).”

The Global Times, the Chinese Communist Party mouthpiece, asserted: “Most importantly, China’s development has made it impossible for any force to make Nepal a pawn in strategic arrangements to counterbalance China’s influence.” The tabloid points a finger at the US influence in the land-locked country: “China’s development has provided Nepal with the potential of benefit sharing. The China-proposed Belt and Road Initiative has brought the country unprecedented opportunities by linking it to its surrounding areas and the world. Nepal will no longer be closed and poor, but will be an essential hub to connect East, South and Central Asia.”

This remains to be seen, but the train to Kathmandu is undoubtedly a tool to realize this dream-program.

On the eastern front, a rail route linking Lijiang to Shangri-La, the tourist spot in Tibet (both are located in Yunnan Province), should start operating at the end of next year; the 139-kilometer Lijiang-Shangri-La line will link Kunming, capital of the province and Chengdu in Sichuan Province, via the Kunming-Dali rail line, allowing passengers to make round trips between Kunming and Shangri-La within one day.

An even-more worrying project for India is the railway line to Yatung, near the Sikkim border.

In 2017, a ‘Tibet-South Asia’ promotion meeting for travel agents was held in Lhasa; the theme was ‘crossing Himalaya, rambling paradise in the clouds’. What was the objective of the gathering?

Travel agencies made some recommendations for outbound (‘out of Tibet’) tourism products for Nepal …and other South Asian countries.

According to Qiao Zhifeng, director general of Yatung Tourism, the County has rich touristic resources. The train planned between Lhasa and Yatung would drastically increase this potential …and help India, said Qiao!

In July 2015, Ananth Krishnan wrote in The Daily Mail: “Local officials in Yatung say a line running to the India border could transform the currently paltry $15million border trade, which relies on a small border market in Yatung.”

The problem is that India has not been consulted.

In 2018, Yatung already received 1.2 lakh Chinese tourists, an increase of 43% over the previous year. Once the train comes, several lakhs of visitors will come within a short distance of the Indian border and let us not forget that the infrastructure in China is dual use, military and civilian.

What would happen in the case of a new Doklam incident?

My article Chinese Trains are India’s Bane appeared in Mail Today on July 15.

One thought on “Chinese Trains are India’s Bane”