China is forced to court India 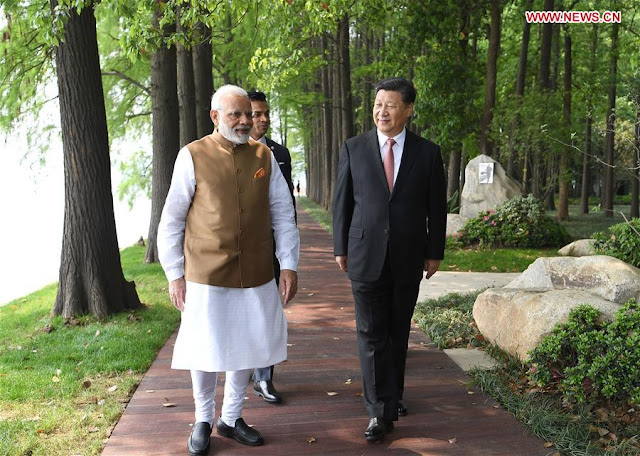 it is not certain, though The Nikkei Asian Review reported that Xi hoped to come to India before the general elections in May. The Japanese publication said that if not in February, the visit could take place after the National People’s Congress in Beijing in March.

Nikkei’s sources added that Xi would discuss “measures to defuse border tensions, as well as propose deals to expand imports of Indian farm products and increase cooperation in advanced technologies”.

The main rationale seems to “counter Washington’s increasingly antagonistic trade policy and aggressive Indo-Pacific diplomacy,” according to the Japanese newspaper.

When asked about it, Hua Chunying, the Chinese Foreign Ministry spokesperson said, “I am not aware of what you said,” but she added that China and India were friendly neighbours.

Why would Xi visit India so soon after the encounter of the two leaders in Wuhan in April 2018, which resulted in the famous ‘consensus’?

The answer is simply because China is not in good shape, having been destabilized by President Trump and his tweets and facing unprecedented economic issues.

The most telling sign has been the postponement, for more than three months now, of the Fourth Plenum of the Central Committee which traditionally discusses economic issues.

Since beginning of October, China watchers have been expecting the Plenum to take place ‘soon’; weeks and months have passed and no Plenum.

On December 17, analysis website sinoinsider.com had already commented: “if no Fourth Plenum is held, this means that the factional struggle is extremely intense and Xi is in grave danger.”

Why has the top leadership been unable to meet?

The Plenum has not been held for different reasons: one is the grim economic situation which brings to the fore dissension, in particular to decide future priorities, among the leadership as well as between the Centre and the Provinces.

Instead of a Plenum, the seven members of the Politburo’s Standing Committee met senior provincial and ministerial-level officials, during a ‘study session’ at the Central Party School in Beijing on January 21. They discussed ‘major risks’ facing the Communist Party of China (CPC).

In his opening speech, Xi spoke of “the prevention and defusing of major risks in areas including politics, ideology, economy, science and technology, society, the external environment and Party building.”

He urged the Party and the regional governments to pursue a holistic approach to national security in order to ensure the political stability of the regime.

He mentioned the turbulent international situation and the complex and sensitive ‘surrounding environment’; ‘stability maintenance’ must be carried out vigorously, he said.

China must protect itself against Black Swans and charging Gray Rhinos: “The CCP regime will likely face immense challenges from inside China and abroad.” Black Swan refers to an unforeseen occurrence with extreme consequences, while a Gray Rhino is a highly obvious threat which has been ignored.

Bloomberg analyzed the economic crisis which is looming large: “Economic growth in the third quarter sank to 6.5 percent, the slowest pace since the depths of the global financial crisis in 2009. …a slowing Middle Kingdom would drag down global growth and corporate profits. …Tariffs on Chinese exports to the US imposed by President Donald Trump are starting to pinch the country’s factories.”

For Xiang Songzuo, a professor at the Renmin University School of Finance, wrote China’s GDP growth would only be 1.67 percent and not 6.5 percent in 2018. Xiang gave four reasons why China’s economy did so badly: first, the tightening of the government financial control caused shortage of capital supply; China’s stock market dropped 30 percent and lost US $1 trillion in value in 2018; the government’s inclination to eliminate private ownership and expand state owned companies which has greatly hurt private companies’ confidence and lastly, the trade war triggered by President Trump.

According to the website Chinascope, Xiang also warned that “nowadays Chinese have become addicted to playing with debt and high leverage financing. This is actually a mirage and will collapse soon.”

All this may force Beijing to have a hard look at its priorities.

One of the first casualties could be the massive infrastructure development. Nikkei quoted an executive at China Railway, a state-owned enterprise handling the rail sector: “Investment for 2019 will very likely reach 850 billion yuan,” This would be about 6% over last year’s figure of 802.8 billion yuan, which surpassed initial plans by about 10%: “Generous stimulus measures for the economy could “take a hit from the trade war with Washington.”

And there is the war with Huawei, the giant telecom company; Meng Wanzhou, Huawei’s CFO, has been arrested in Canada. Bloomberg noted: “Should the US hit Huawei with a business ban and prohibit the sale of American microchips and other high-tech components to the CCP’s national champion, then Huawei faces a real risk of bankruptcy. A crippled Huawei endangers the CCP’s high-tech ambitions and propaganda, the Belt and Road project, the regime’s plan for global 5G dominance, and military communications.”

India seems blissfully unaware that there could be a problem with Huawei; you will say. Five years ago Killi Kruparani, the MoS in the Ministry of Communications and IT admitted that an incident “about the alleged hacking of Bharat Sanchar Nigam Ltd (BSNL) network by Huawei … has come to notice”.

After Wuhan, between friends, no such thing can happen!

A word of caution is however necessary, Hindi-China bhai-bhai has not led anywhere in the past.

This article China is forced to court India appeared in Mail Today.