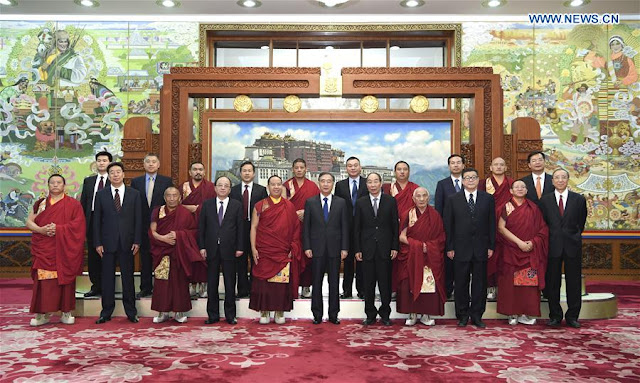 On May 5, China’s top political advisor Wang Yang met with the Chinese-selected 11th Panchen Lama Gyaltsen Norbu in Beijing. According to Xinhua, the Panchen Lama presented Wang a white khata (ceremonial scarf) and briefed the chairman of the Chinese People’s Political Consultative Conference (CPPCC) about his studies and his life.

What was the purpose of this meeting?

First to check on Gyaltsen Norbu. Does he follows faithfully the line of the Party?

It was also a way to make the Chinese people forget about Gedun Choekyi Nyima, the Tibetan Panchen Lama, in house-arrest for the past 24 years. It diverted the attention of the ‘masses’ inside the Mainland.

Perhaps more importantly, Beijing also wants Gyaltsen Norbu to take the lead to ‘discover’ the new Dalai Lama …when the moment comes.  One more reason, he needed to be ‘briefed’.

This reminded me, something I wrote four years ago: ‘Hot Summer on the Tibetan Plateau’.

I noted: “The political climate is hotting up on the Tibetan plateau.”

Xinhua had announced that President Xi Jinping ‘accepted an audience’ with Gyaltsen Norbu at Zhongnanhai in Beijing on June 10, 2015.

The term ‘accepting an audience’ was a euphemism to say the least, because the ‘audience’ seemed more like summon-cum-lecture.

A few weeks earlier, the United Front Work Department (UFWD) held a 3-day Conference in Beijing (from May 18 to 20) to take stock of China’s ‘internal threats’. The UFWD usually deals with the ‘minorities’ such as Tibetans and Uyghurs as well as non-Communist Party organizations.

The Tibetan Diaspora was painted in black and white: “Among the exiled Tibetans, only a handful of ‘high-ranking officials’ Tibetans can obtain the ‘nationality status’ or ‘green cards’ from their host countries, such as several Kalons (cabinet ministers) of the ‘Tibetan government-in-exile’. Most of the overseas Tibetans, especially those living in India and Nepal, are living in poverty and are basically dependent on others.”

The Chinese website asked another question: “Why did Xi Jinping meet with the Panchen Lama just now?”

The article noted that the two leaders (Xi and Norbu) had already met in 2006, on the occasion of the first World Buddhism Forum in Hangzhou; then, when Xi, then vice-president went to Tibet in July 2011 and paid homage to the 10th Panchen Lama at the Tashilhunpo Monastery. Xi even offered a khata, a ceremonial scarf, on the tomb of the great Tibetan leader.

The meeting was ‘very appropriate’ says Xinhua, because it showed that the Party “has consistently given a high level of attention to Tibet.” It also indicated “the great importance that the Central Committee attaches to the religious work,” affirming that Xi Jinping had “set an example for the rest of the Party members by taking the lead in uniting the religious figures.”

What happened during the Xi-Panchen encounter?

First, looking at the picture published by Xinhua, apart from Xi, three other members of the Politburo were in attendance (Yu Zhengsheng of the Standing Committee, Sun Chunlan, the UFW head and Li Zhanshu, director of the General Office of the Party); also present was Jampa Phuntsok (the senior-most Tibetan in the Party). Why such a rare lineup?

Xi did most of the talking. If bygones have to be bygones, the Party has to be reassured that those who are supposed to represent the Party understand properly the stand of the Party, he said.

In Beijing’s game plan, Gyaltsen Norbu was destined to play a central role. He had been especially selected by Beijing from a family of faithful Communist cadres from Nagchu prefecture.

What will happen if Norbu, though groomed by the Party, started behaving like the Great Tenth, who sent a 70,000 character letter to Zhou Enlai in 1962 criticizing the Party’ actions in Tibet and who, a few hours before his death, again asked, what good 30 years of ‘liberation’ had brought to Tibet?

A frightful thought for the Party!

Let us come to the May 5 encounter with Wang, a member of the Standing Committee of the Political Bureau and No 4 in the Party.

The meeting was well-attended; Wu Yingjie, the Party boss in Tibet had come all the way from Lhasa. Also in attendance, the main players in the United Front Work Department (the Director, You Quan, the Executive Director Zhang Yijiong and the old Tibet hand Sithar, who is still an advisor).

Apparently Wang fully recognized “the progress made by the Panchen Lama in terms of Buddhist attainments, cultural literacy, and religious influences.”

Xinhua quoted Wang affirming: “The Panchen Lama, as a leader of Tibetan Buddhism, shoulders a great responsibility of leading Tibetan Buddhism in the right direction, and safeguarding the unification of the motherland and the ethnic solidarity.”

Now comes the crucial sentence, Wang said “he hoped the Panchen Lama will take a firm political stand and lead the religious figures and believers in fighting against all separatist elements.”

Like in 2015, Gyaltsen Norbu was lectured by a Standing Committee’s member; he was asked “to take the lead in interpreting religious doctrines to adapt them to China’s socialism and improve his religious practice and study to earn support from believers.”

In other words, Buddhism …with Communist characteristics.

Gyaltsen Norbu answered that he was ready to “make his contributions to safeguarding the unification of the motherland, ethnic solidarity, social stability, and religious harmony.”

The full-booted ‘Panchen Lama’ pledged that he will always remember “the instructions given by CPC leaders and devote himself to religious studies and practices to serve his believers.”

I don’t know why he had to wear these old traditional boots; I though the atheist Party was rejected the Four Olds (Old Customs, Old Culture, Old Habits, and Old Ideas). Perhaps not!

When the young 10th Panchen Lama visited India in 1956/57, he never wore these old boots.