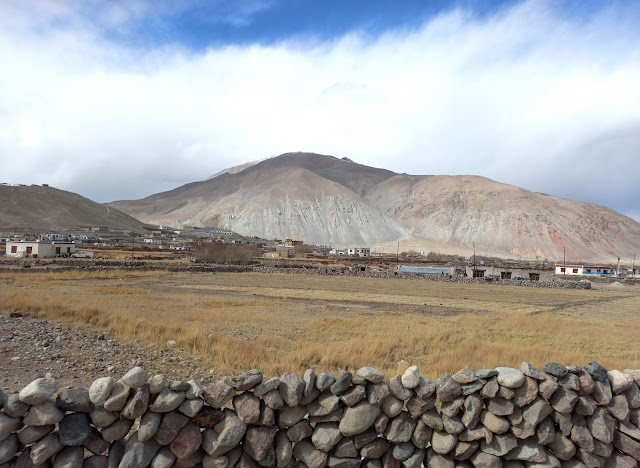 I still remember my first visit in 2002. There were hardly any roads outside Leh and the approach from Manali in Himachal Pradesh or Zoji-la in Jammu and Kashmir was not an easy one; only a few flights were landing at the Bakula Rinpoche airport and it was always tricky to get a seat in a plane.

Three years ago, I had the chance of visiting Leh again; it was a few months after the mountainous region became a Union Territory (a long-time demand of the Ladakh Hill Development Council, the Ladakh Buddhist Association and the people in general).

By that time, Leh and a few selected areas had tremendously developed.

But all this was before what the historians will one day call ‘the BC era’ (‘before COVID’) and perhaps more importantly before the confrontation with China in several places on the northern boundary.

Incidentally, is it not a paradox that one of the most peaceful spots on earth, with its high-perched monasteries, its innumerable stupas and prayers flags floating around everywhere, has witnessed the bloodiest conflicts since independence? It is only due to the belligerence of the neighbours.

At the time of Kashmir’s accession to India in October 1947, political and economic power was offered to Sheikh Abdullah’s National Conference government in Srinagar despite the fact that Ladakh covered 70 per cent of the area under India’s administration. Dominated by the successive Kashmiri governments for several decades, practically Ladakh was deprived of any say in its development.

Soon after the signature of the Instrument of Accession in October 1947, raiders from the North West Frontier Province began pouring into the valley, looting and burning villages; Ali Jinnah and his colleagues’ motto was: “Let us liberate our Muslim brothers from the yoke of the Dogras”.

But thr Pakistanis leaders’ greed had no limit. Their ‘two nations’ theory, according to which the Muslim dominated areas of the subcontinent were to become part of Pakistan and the Hindus, Sikhs and others were to remain with India, was thrown into the wind when Karachi decided to ‘liberate’ their Buddhist brothers in Ladakh. The motivation for Operation Sledge, which aimed to take over the vast Ladakh plateau, was not ideological: the treasures of the Buddhist gompas (monasteries) were a great lure for finance-starved Pakistan.

In February 1948, Brig ‘Bogey’ Sen, the brigade commander in Srinagar was in a fix; how to save Ladakh. The formidable Zoji-la pass was an uncrossable barrier between the valley and Ladakh and there was no way to airlift reinforcements to Leh.

It was then that Capts (later Colonels) Kushal Chand and Prithvi Chand, two young Buddhist officers from Lahaul offered their services; they told the brigadier they were ready to cross Zoji-la in winter with a small caravan of men and mules carrying arms and ammunitions. Though Buddhists and believers in ahimsa, these men were ready to risk their lives and fight their way through the weather, the altitude and the raiders to defend their co-religionists in Ladakh. Nobody thought the mission feasible, but there was no other solution. They succeeded and saved Ladakh (and were awarded Mahavir Chakra or MVC).

One should also mention the Ladakhi, Col Chewang Rinchen, who was twice awarded the MVC– first for having stopped the advance of raiders in the Nubra Valley in June 1948 and the second for the bravery he displayed in the Turtuk sector in December 1971.

More recently, Col Sonam Wangchuk (another Buddhist soldier to be awarded the MVC) and his Ladakh Scouts recaptured some of the crucial peaks occupied by Pakistan during the Kargil war in 1999.

These Buddhist heroes had to first conquer their own non-violent Buddhist principles before they could take on the invaders; they knew the survival of their dharma was at stake.

From the start, the Ladakhis took the stand that their future was linked with India, though culturally, racially and linguistically they had in the past been close to Tibet.

In May 1949, the first delegation of the Young Men’s Buddhist Association of Ladakh led by Kalon Chhewang Rigzin met Nehru in Delhi and presented him a memorandum: “We seek the bosom of that gracious Mother India to receive more nutriment for growth to our full stature in every way. She has given us what we prize above all things — our religion and culture.”

Creation of a Union Territory

Things started moving faster after the Central Government decided to abrogate Article 370 of the Constitution on August 5, 2019; the Parliament of India voted in favour of a resolution tabled by the Home Minister to revoke the temporary special status, or autonomy, granted under Article 370 of the Indian Constitution to Jammu and Kashmir. Ladakh could finally become a Union Territory (UT).

Then early 2020, the COVID wave swept Ladakh, stopping tourism, the newly created UT’s main revenue. A few months later, the northern borders were subject to armed attack at several locations by the People’s Liberation Army. It was a turning point in the history of the relations with China, but ironically the development of the border region got a boost due to the new requirements of the Indian Army and large-scale infrastructure projects started to reach the remotest parts of the UT for the first time.

During a recent visit to Rezang La and Chushul, I could personally witness the changes over the last three years.

But let us first remember the events which took place 60 years.

The Battle of Rezang La

On 18 November 1962, the ‘Charlie’ Company of the 13th Battalion of the Kumaon Regiment fought at Rezang La Pass at the incredible height of 18,000 feet, one of the greatest battles in history; 114 soldiers of the 124-strong company led by Maj Shaitan Singh, lost their lives, heroically defending the nearby Chushul airstrip, the last defence before Leh.

Shaitan Singh was posthumously awarded the Param Vir Chakra, the highest military decoration; his battalion received eight VCs (Vir Chakras), four SMs (Sena Medals) and one Mention-in-Dispatches, making it one of the highest decorated companies of the Indian Army.

A recent book on the battle says: “The valour of the Charlie Company not only successfully stopped China’s advance, but it also resulted in the Chushul airport being saved, thereby preventing a possible Chinese occupation of the entire Ladakh region in 1962. According to reports, a total of 1300 Chinese soldiers were killed trying to capture Rezang La.”

Visiting the War Memorial, one has a feeling of super-humans defending the Indian territory against the Chinese onslaught; it is deeply touching; remember that most of the soldiers of the Charlie Company who fought the battle at this altitude had come from the plains of Haryana.

The Role of the Army

One of the greatest changes in the region is the opening of the area to Indian visitors, something which was not possible during my last visit in 2019.

It is necessary to mention the exemplary role of the Indian Army, which has not only encouraged these changes, but due their own strategic requirements, have built dual-use roads, facilitated the construction of schools and the erection of communication towers (one gets 4G Jio connection in Chushul, nearby the Rezang La Memorial).

During an encounter with some local herders, they unanimously agreed that their lives had definitively changed, they have better access to education (though they would like the school in Chushul to go up to Class 12), health services and communications have greatly improved.

The local population has benefited from the many changes brought by the Indian Army and the UT Administration; they can now provide taxi services (thanks to the opening of the area and better roads); they can open home stay which helps them to add to their poor pastoral revenue and contrary to what has been said in some poorly-informed media articles, the grazers are able to take their yaks till the LAC (except for a small area which has been demilitarized in the vicinity of the Spangur Gap, north of the Kailash Range). The rapid changes are likely to continue in the years to come, hopefully taking care of the fragile environment.

It remains striking that these majestic mountains remain the theater of an armed conflict, some sixty years after the Battle of Rezang La.

Looking at the snowy peaks, one wonders what are the objectives of President Xi Jinping when he speaks of ‘The Peaceful Rise of China’? However, Beijing’s belligerence has indirectly brought a better life to these deprived populations.

One thought on “Changing Ladakh”