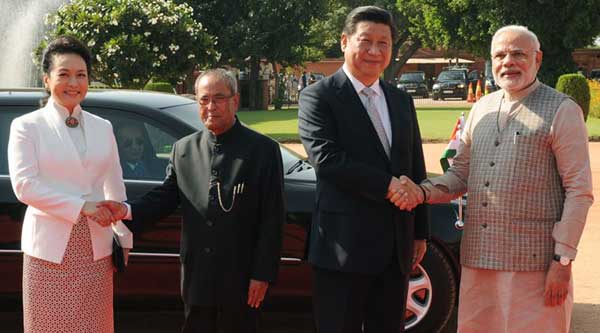 How does one rate Chinese President Xi Jinping’s just concluded three-day visit to India? If one goes by the body language of the Chinese President and the Indian Prime Minister Narendra Modi as shown in television channels, the visit was marked by sincerity to rise together. In fact, before the commencement of his visit, President Xi had written an op-ed piece in the Hindu newspaper, saying, “As the two engines of Asian economy, we need to become cooperation partners spearheading growth. I believe that the combination of China’s energy plus India’s wisdom will release massive potential”.

…the “intrusions” happened when the Chinese President, China’s supreme military leader, was on the Indian soil. Secondly, it happened in an area called Chumar, which was never claimed by China before.

During his stay in Delhi, the Chinese President also addressed a special gathering of strategic analysts. Having attended this address, I can say that Xi seems to be one of the rarest Chinese top leaders who follow India closely. And he sounded genuine when he said, “China and India have a combined population of more than 2.5 billion. If China and India speak with one voice, the whole world will listen. If China and India join hands, the whole world will be watching. China and India should strengthen strategic cooperation in dealing with global issues. We should inherit and carry forward the Five Principles of Peaceful Coexistence. We should stick to the ideas of sovereign equality, fairness and justice, common security, common growth, mutual benefits, and inclusiveness, so that we can maintain the common interests of not just our two nations, but the vast numbers of developing countries.”

Similarly, the 28- point joint statement issued on September 19 to conclude the visit was more comprehensive and positive compared to the 11-point joint statement issued on October 23, 2013, following the India-visit of the Chinese Prime Minister Li Keqiang. In fact, the second point of the latest joint statement said it all when it mentioned, “The leaders evaluated positively the progress of India-China relations over the recent years, and noted that both sides always consider their relations from a strategic and overall perspective. The two sides reaffirmed their commitment to abide by the principles and consensus both had agreed to, and further consolidate the Strategic and Cooperative Partnership for Peace and Prosperity on the basis of the Five Principles of Peaceful Coexistence and mutual respect and sensitivities for each other’s concerns and aspirations. They agreed that as two large developing and emerging economies, their developmental goals are interlinked and should be pursued in a mutually supportive manner. Recognizing that their respective growth processes are mutually reinforcing, they agreed to leverage mutual complementarities and build a closer developmental partnership. The leaders agreed to make this developmental partnership a core component of the Strategic and Cooperative Partnership for Peace and Prosperity. This developmental partnership is conducive not only to the common interests of both sides, but also to stability and prosperity of the region and the world.’

And yet, the future history, in all probability, will mark Xi’s maiden visit to India as a very ordinary event, marked as it was by the standoff-engagement by the Indian and Chinese troops on the disputed Line of Actual Control (LAC) in the Ladakh region. Of course, the “intrusions” by the Chinese troops into the areas under India’s control have become more or less a normal phenomenon on the eve of every important political visit to one another. But this time, it happened when the Chinese President, China’s supreme military leader, was on the Indian soil. Secondly, it happened in an area called Chumar, which was never claimed by China before. So much so that Prime Minister Modi had to raise the issue during the visit; he, in fact, became the first Indian Prime Minister to raise the issue in a joint meet before the press, something the Chinese diplomats are rarely accustomed to. Modi did not only break the diplomatic protocol, he also deviated from the established Sino-Indian diplomatic tradition that the border dispute will not be allowed to stall the progress on other bilateral fronts. Modi gave enough hints that any further delay in resolving the boundary issue would affect the overall relations.

Modi gave enough hints that any further delay in resolving the boundary issue would affect the overall relations.

There are many theories doing the rounds in Indian capital to explain the ongoing standoff between the Indian and Chinese troops and its timing. One theory is that the fault lies with more aggressive patrolling by the Indian army on the orders of the “nationalist” Modi. This theory suggests that the incident has been specially created for the credulous Indian media to be hyped by the pro-American arms merchants on the eve of Modi’s forthcoming visit to the United States where India’s future purchases of American arms will figure prominently. I do not want to comment on this theory, but one often wonders why in all the cases of intrusion over the last few years, it is always the Chinese who are in Indian territory under the specious logic that the LAC has not been clearly identified or demarcated? Why is it that one never hears from the Chinese side that Indian troops have crossed over to their side by citing the same logic of non-demarcation?

There is a second theory that Xi allowed the Chinese troops to intrude into the Indian territory during his India-visit as retribution to what Modi had done during his recent trip to Japan where he indicated that China’s policy of territorial expansion would not be tolerated. I disagree totally with this theory. In my considered opinion, Modi’s mentioning of territorial expansion was meant for none other than Japan. Modi was trying to explain that the policy of economic development by Japan since the World War II was highly successful, whereas Japan’s blueprint of “Co- prosperity Sphere” , pursued by Japan through territorial wars prior to and during World War II had turned out to be a disaster. I often wonder why the Indian diplomats could not clarify Modi’s speech in these lines during and after his visit to Japan.

There is also a third theory that Xi was really clueless about the incursions during his visit and that some unruly elements in the People’s Liberation Army (PLA) deliberately embarrassed him. It is said that in his relentless tirade against corruption within PLA, Xi has taken strong steps that have already felled thousands of heads among cadres and dozens at ministerial level. It is being argued that XI, as Chairman of the Central Military Commission (CMC), wants to promote two of his faithful generals – Liu Yuan and Zhang Youxia – deemed to become vice president of the CMC and head of the military’s discipline commission respectively. Naturally, all this has disturbed the elements opposed to him. This explains why on his return to Beijing, Xi on September 21 called for a meeting of the top military commanders and talked of “inefficiencies” in the chain of military command and instructed them to ensure that “all PLA forces follow the instructions of President Xi.”

China throughout ages has done everything possible to halt the growth of Indian influence and dent India’s eminence.

Be that as it may, the overall India-China relations may be seen from three angles – border disputes, economic ties and geopolitical goals. And here, things are not inspiring. Despite rounds of negotiations between the two sides over the last 15 years, there is no real progress on the border front, except the fact that soldiers of the two have avoided real armed clashes. On the economic front, the relationship is one sided, strongly in favour of China. Today, China, at nearly 70 billion dollars per year, has emerged as India’s largest trading partner after it replaced the United States (in March 2008). According to a study by the Reserve Bank of India, India’s bilateral trade deficit with China reached an unsustainable level of US$ 39.1 billion in 2012. Things have not improved since then. It can only be rectified if China allows India’s IT and pharmaceutical industries greater access to its markets. Of course, China can invest liberally in India. But then during Xi’s visit, China offered only $20 billion, much against the anticipated eye-popping $100 billion. This was in contrast to Modi’s recent Japanese deal of $35 billion.

Geopolitically speaking, there have been more areas of discord than accord between India and China, be it on Pakistan, Kashmir, oil exploration in Vietnam or on nuclear issues and the reforms of the United Nations. There are strong merits in the arguments that in the name of multipolar world, China is striving for a unipolar Asia, where, true to its theory of “Middle Kingdom”, China will not allow another pole, whether it is India or Japan, to make Asia truly multipolar. Historically speaking, that has been the Chinese tradition. China throughout ages has done everything possible to halt the growth of Indian influence and dent India’s eminence.

Southeast Asia as a region has always been the battleground for influence by India and China. Many French and Indian scholars once referred to the region as “Farther India” or “Greater India”, L’Inde Exterieure and the Hinduized or “Indianized states”. On the contrary, many Chinese writings identified the region as Kun Lun or Nanyang or “Little China”. It is because of this that many even refer the landmass between India and China as “Indo-China”, which now includes Laos, Cambodia, and Vietnam. In fact, according to a map produced in Chinese text books in 1954, China’s traditional sphere of influence went beyond Southeast Asia to include Mongolia, parts of Central Asia, and the entire Himalayan region, including northern Kashmir, Nepal, Bhutan and Sikkim. Illustrating the country’s lost “tributary system”(Chinese mainland the imperial centre and other countries, its subordinates, paying regular tributes), this map was intended to create a popular support for Beijing’s efforts to wipe out the “humiliation” of the “territorial losses” in the past at the hands of the Western and Japanese “imperialists”.

All this does not mean that India and China are bound to remain adversaries. As former Prime Minister Manmohan Singh loved to say, the world has enough space for both India and China to grow together. But for this to happen, both Xi and Modi have to convert myriad challenges, often antagonistic, between them into opportunities.

2 thoughts on “Beyond India-China Bonhomie”