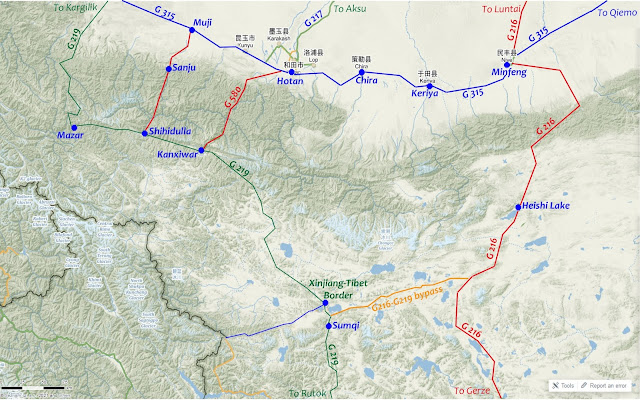 Beijing starts construction of strategic Xinjiang-Tibet highway, which will bring the greatest strategic change for India since the 1950s, as it will be an alternate artery for the Dragon to fortify its presence along the LAC.

On 27 May 1951, the Ashi Shan (mountain) volcano erupted in the Xinjiang province of China. It began with a loud detonation, followed by the ejection of large blocks of lava, emitting thick black smoke, and lasted for a number of days.

The Ashi volcano, the highest volcano in the northern hemisphere, is part of a group of about 70 cinder cones in the Kunlun range, at the border of Tibet’s Northern Plain (Changthang). The 1951 eruption remains the most recent volcanic activity in China. What is unknown is the other story behind the eruption in this most desolate area.

In the early 1950s, Mao Zedong’s People’s Liberation Army (PLA) was desperate to link its two recently acquired provinces of Sinkiang (today Xinjiang) and Tibet. The country of the Uighurs, also known as Eastern Turkestan, had been annexed in December 1949, while Eastern Tibet was invaded in October 1950. It was a matter of national priority to discover a route between Xinjiang and Tibet.

In 1951, when the PLA decided to cross the massive Kunlun range along the Keryia Ancient Road in Hotan County, it encountered the Ashi Shan. It is then that the volcano erupted. Many road workers were killed in the mishap, and the plan to build a road through the Keryia route was abandoned. Mao had no choice but to find an alternative.

It is how the G219 National Highway Xinjiang-Tibet Road, as we know it today, was selected. The road crossed through Indian territory in the Aksai Chin, but this was not an issue which bothered the Great Helmsman.

Chinese leaders never forget the dreams of their predecessors. Today, one of the most secret projects of President Xi Jinping is to open a new link between Xinjiang and Tibet, the two restive autonomous regions bordering India.

It appears that China has recently started the construction of the National Highway 216 (known as G216), linking northern Xinjiang to Kyirong County in Tibet (the border town with Nepal). But for India, the G216 will bring the greatest strategic change since the 1950s, as it will be an alternate artery for China to reinforce the northern India front.

According to the ‘National Highway Network Planning (2013-2030)’, the G216 runs from Hongshanzui Port (in Altay County, north of the Xinjiang Uyghur Autonomous Region or XUAR) in direction of Baluntai in Hejing County, where it joins China National Highway 218, then moves to Luntai County entering the Taklamakan desert till Minfeng County. It then proceeds to Garze County in Tibet, to finally reach Kyirong.

For obvious reasons, Beijing does not want to announce as yet that it has started the construction of the highly-strategic road-link. For Beijing, it is also an important part of Xi Jinping’s Belt and Road Initiative (BRI) between Central and South Asia, and in case of a conflict with India, it will be a great boon for the PLA.

The crossing of the Kunlun range is still the trickiest part of the project. How will the Chinese engineers manage to cross the mountainous range? Once on the plateau, the terrain (via Gerze County) will be easier. But old dreams of megalomaniac rulers cannot be dropped.

Today, there is little information on the G216. However, a Chinese website provides some details on the history of the road. It says: “Xinjiang and Tibet are two giant autonomous regions occupying nearly one-third of China’s landmass; the boundary between the two autonomous regions is more than 1,300 kilometres.”

The main issue for Beijing is that, “due to the barrier of the Kunlun Mountains and the harsh natural environment of the northern Tibet Plateau, the number of practical passages is limited… Therefore, in history, the Western Regions and the Tibetan Plateau were relatively independent geographical areas, and they did not communicate closely with each other”.

It then makes an interesting remark: “The boundary between Tibet and Xinjiang is not divided according to the boundary of the plateau, but roughly the southern foot of the main Kunlun Mountains is Tibet.” It practically means that the Kunlun range is still the natural frontier between India and China. The crossing of the Kunlun range is clearly the passage between two worlds.

There were several ancient routes to Tibet crossing the Kunlun mountains. In the early days, there were several passages: The Keliyang trail, southwest of Hotan, leading to Aksai Chin, the Sanju ancient trade road, which is now being revived, and the Keriya Trail, which was abandoned due to the 1951 volcano eruption, but is still “the shortest of several ancient roads and also the most difficult and dangerous one”.

The Keliyang and the Sanju ancient roads end up in Shahidullah (‘martyr’ in Uighur). In 1949, it continued to be a main hub in the region after “the actual control of the two places returned to the central government [Beijing].” The conclusion is: “to strengthen the communication and ties between the two regions, the linking of the highways is urgently needed to be put on the agenda.”

The article further confirms that according to the national highway network plan, during the period 2013-2030, two new corridors will be built to connect Xinjiang with Tibet. The G216 National Highway is one of them: “Its main section is almost parallel to the ancient Keryia Road and is located on the east side of the ancient road, creating a closest connection line from Urumqi to Lhasa.”

The author adds: “In addition, the Hotan area also has a local road network ‘three horizontal and three vertical’ plans, and these ‘three verticals’ are all related to crossing the Kunlun Mountains.”

One of the verticals is the G580 National Highway, the second vertical is the Keryia Highway (G216) which enters Tibet near Heishi Lake, and the third vertical is the Sanju Highway constructed almost along the route of the Sanju ancient road in Pishan County. “As a result, the highway across the Kunlun Mountains will become a network,” concludes the article.

All this is worrying. Will the Indian government follow its usual ostrich-like policy or will it react? If it does not, it will have implications for several decades for India, like the Aksai Chin blunder in the 1950s.

One thought on “Beware, India! China’s Most Strategic Road”