Beijing's Map Aggression Now and Then 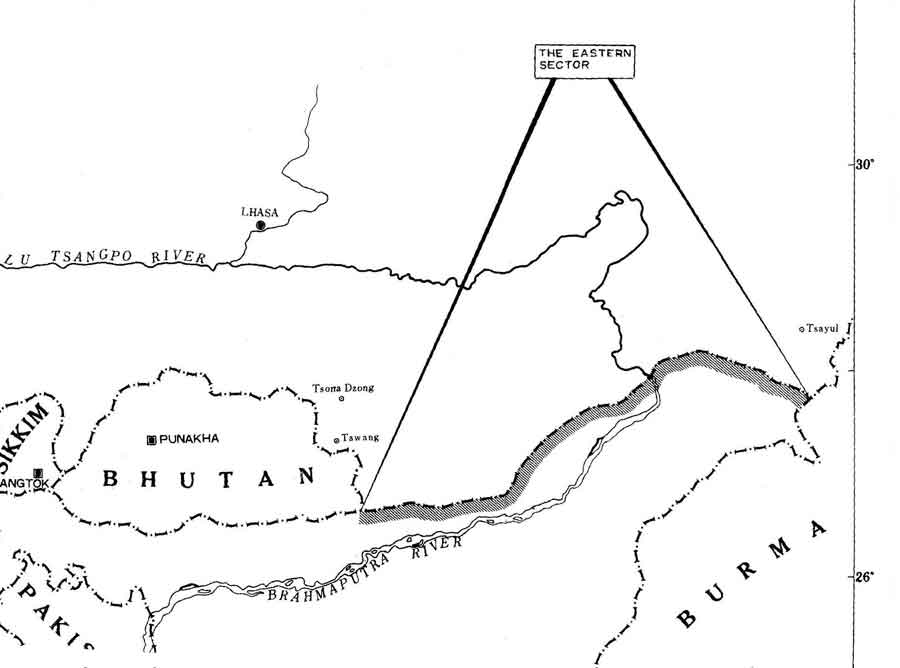 Yesterday, Xinhua reported that China “has inked for the first time South China Sea islands on its new official maps in equal scale to that of the Chinese mainland.”

The National Administration of Surveying, Mapping and Geoinformation (NASMG) announced that “the new vertical-format maps of China, published by Sinomaps Press, include more than 130 islands and islets in the South China Sea, most of which have not been featured on previous maps of China.”

The Indian Prime Minister had still not realised that the Five Principles were a one-way road; but he was much too engrossed in his future role not only as the ‘neutral’ chairperson of the cease-fire commission for Indochina but also the self-appointed leader of the newly independent nations of Asia and Africa.

Zhou Beiyan, the editor of the new maps declared: “The old maps, which were in horizontal format, only featured bigger islands such as the Xisha, Zhongsha and Nansha islands. These were illustrated in the bottom-right corner at half the scale used for the Chinese mainland.”

The new maps will not be available to the public until the end of January.

But according to the Communist mouthpiece: “The maps will be very significant in enhancing Chinese people’s awareness of national territory, safeguarding China’s marine rights and interests and manifesting China’s political diplomatic stance.

This reminds me of the map aggression against India in the early 1950s, at the time the infamous Panchesheel Agreement was negotiated and the foolishness of the Indian Government which did not react to the Chinese ‘map’ aggression.

Nehru’s Visit to Beijing in October 1954

The visit of the Indian Prime Minister to Beijing marks the apogee of the ‘friendship’ between India and China and perhaps also the first beginning of the doubts in Nehru’s mind.

For the first time on October 19, 1954, the Indian Prime Minister met Mao in the Great Hall of the People in Beijing. The Great Helmsman began the talks by dwelling “on the age-old associations and the new friendship between China and India”.

This remark speaks for itself. While the Indian leaders were speaking of 2000 years of friendship, Mao was speaking of ‘new friendship’.

Nehru had two talks with Mao, but neither party raised the Tibetan issue or the border question. Mao was more interested to know the reaction of the Indian leader on the use of the atomic bomb . It is during this meeting that Mao first termed the bomb as a ‘paper tiger’.

Nehru hesitantly told Zhou: “…Supposing we publish a map showing Tibet as a part of India, how would China feel about it?…”

During the three meetings between Nehru and Zhou Enlai, once again the ‘small matters’ were not discussed, except for a short mention about the Chinese maps which showed large parts of India and Burma within the Chinese territory.

As regards maps, I just casually mentioned to you some of the anxieties of our neighbours. We are not worried on this point. Our frontiers are clear but I mention it in the case of Burma because questions of this kind become a handle in the hands of enemy. Supposing we publish a map showing Tibet as a part of India, how would China feel about it? But as I said, I am sure, the maps were old maps and you did not mean it.

Finally at the end of meeting, Nehru dared ask Zhou a question directly linked to the six-month old Agreement on Tibet. As with the 17-Point Agreement three years earlier, the Chinese had scant respect for the provisions of the Sino-Indian Agreement. Though always ready to use its preamble, the Chinese leaders treated the Agreement as a mere piece of paper, at least as far as the main clauses were concerned. This was less than six months after the signature. For a simple matter such as the rights to go on a pilgrimage, the Indians (and Tibetans) were harassed. Nehru explained as mildly as possible to his counterpart the difficulties encountered by the pilgrims:

There is a small matter which I may take this opportunity to mention to you. Some complaints have recently been received from pilgrims going to Tibet. Some of them are apparently being harassed by guards and I hope that Your Excellency will look into the matter. As you are aware, every summer there is a large pilgrim traffic between India and Tibet. As an example of the sort of harassment to which these pilgrims are subjected, I would mention that one of my friends was stopped by the border guards who told him that he could not be regarded as a pilgrim because he was not wearing a monk’s gown.

The Indian Prime Minister had still not realised that the Five Principles were a one-way road; but he was much too engrossed in his future role not only as the ‘neutral’ chairperson of the cease-fire commission for Indochina but also the self-appointed leader of the newly independent nations of Asia and Africa.

Two small incidents indicate the future direction in which the relations between India, Tibet and China would go.

The Sino-Indian conflict of 1962 was far away and seemed unlikely in 1954 in the hey-day of Hindi-Chini Bhai Bhai. I do not know on what basis Nehru foresaw this, but the 1962 war  was of India’s making.

During the course of his visit, Nehru had occasion to meet the young Dalai Lama  for the first time. As we have seen, Tibet and the border issue had been totally ignored in the talks with the Chinese leaders. This encounter with the young Lama was for Nehru like a mirror reminding him of the main provisions of the treaty (i.e. Tibet). The Dalai Lama recalls:

We [in Tibet] had heard his name. India also was a country very close to our mind. I had personally heard about Nehru.

When we heard that we will meet him, there was a bit of excitement.

Pandit Nehru led by Zhou Enlai and many Chinese dignitaries were lining up when he reached the place where I was standing.

Zhou Enlai said: ‘This is the Dalai Lama.’ Nehru remained motionless, no speech, not looking in the eyes.

He just stood in front of me, without speech, without moving, motionlessly he remained like that. I was a bit embarrassed. I told through the Chinese interpreter: ‘I have heard a lot about you, and today I am very happy to meet you’.

Nehru did not give a particular response, he seemed maybe happy, then he went to the next person. That was my first experience [with him].

[That day] I thought and felt that from Nehru’s side, there will be no support for Tibet and no support for the Dalai Lama. During a short moment, many things that occurred from 1949 till 1954 [passed] in his mind, like lightning, that is my feeling.

Was this strange silence of the Indian Prime Minister a sign that he had begun to realize that he had betrayed his own statement four years earlier in the Lok Sabha ?

Another incident is worth relating. Sultan M. Khan, then an official  in the Pakistani Embassy in Beijing remembers:

Sino-Indian relations continued to get closer, and Nehru received a very warm welcome on his visit in 1954. A few days after his visit, the Indian Embassy held a reception at which I overheard an Indian diplomat, who had acted as Nehru’s interpreter, telling some of his colleagues that just before his departure for Shanghai, Nehru was in a very sombre mood, and had said to senior members of his delegation that after his talks with Mao, he was pessimistic about the relations with China, and foresaw a conflict in the future. The Sino-Indian conflict of 1962 was far away and seemed unlikely in 1954 in the hey-day of Hindi-Chini Bhai Bhai. I do not know on what basis Nehru foresaw this, but the 1962 war  was of India’s making.

Perhaps after hearing Mao’s comment on the atomic bomb, Nehru was unsure of the success of his Five Principles. Though one cannot be certain of the veracity of Khan’s comments, they appear to have some truth. It is certain that in June-July 1954 the Chinese leaders had got the support that they needed from India at a very crucial moment of their history. It helped them to impose their view in Geneva. Six months later, their needs were not the same and this partly explains Mao’s tough talk with Nehru.

3 thoughts on “Beijing’s Map Aggression Now and Then”