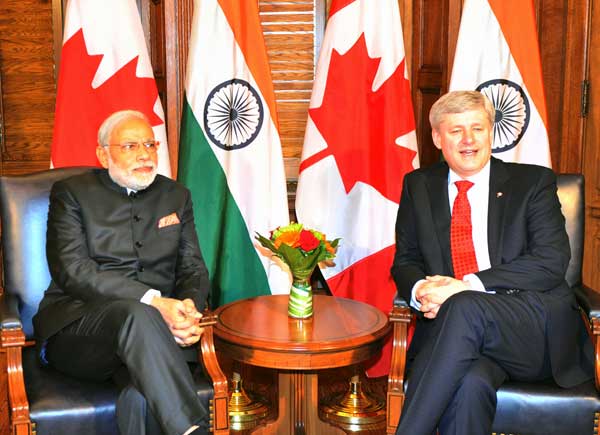 Prime Minister Modi’s seven-day mission to France, Germany and Canada will have taken him to seven cities, covering several thousand kilometres and attending innumerable functions. By all accounts, a success, with twenty pacts signed in France and ten issues highlighted in Germany. In France, he concentrated on strategic issues, focused on MMRCA (Medium Multi-Role Combat Aircraft), Airbus aircraft, possibly nuclear submarines, Areva nuclear power technology. In Germany, the stress was on technology, trade and business. The Hanover trade fair was something special for India.

It has taken an Indian prime minister 42 years to visit Canada after Indira Gandhi went there in 1973. Canada is not the only country that our leaders ignored in the last several decades. We hardly found the time for our neighbours either.

In Canada, the focus will be more on investment and economic cooperation, energy, trade, uranium supplies and security issues. It has taken an Indian prime minister 42 years to visit Canada after Indira Gandhi went there in 1973. Canada is not the only country that our leaders ignored in the last several decades. We hardly found the time for our neighbours either.

For a man who many dismissed as a novice at foreign relations, Modi understood that a peaceful and friendly neighbourhood adds to a nation’s security and economic well-being. A practical man, Narendra Modi seems to have worked on a well thought out strategy. It was the long neglected neighbourhood that first needed assurance of India’s goodwill.

As usual we have picked on something that seems to be negative about the current visit, but is not. Many of us are eager to trash the “Make in India” campaign just after one hiccup over the Rafale issue. It was reassuring to listen to Raksha Mantri Parrikar’s lucid interview with Nitin Gokhale and Sumit Awasthi on IBN7, and reading Admiral Arun Prakash’s article The Rafale Conundrum in the South Asia Monitor helped clarify the rest. Yet one gets the feeling that there are sections in India who want what Modi is trying to get for the country, but do not want him to deliver these very things. Narendra Modi is not expected to succeed where others failed. So, instead of looking at the bigger picture we get lost in controversies and trivia.

Economic growth, essential for the rise of India as a power, cannot be achieved without considerable international cooperation and investment. There are countries that are willing to do business with India and have the means and resources to invest. The second layer would be countries willing and able to do trade. This meant reaching out to the US, Japan, Australia, France, Germany and Canada seeking technology and civil nuclear cooperation that will bring more power to the electric grid and crank the sluggish manufacturing sector.

Modi knows that he has to put systems in place and remedy others if India has to succeed in the decade ahead.

Then there is the third layer. India is locked out continentally from Central Asia and to our north because of our two major neighbours. We must therefore secure the sea routes. The Indian Ocean Rim countries are important while Japan, Vietnam, Indonesia and Republic of Korea, would add to the Indo-Pacific concept.

Fifteen nations in 11 months and important visits to China and RoK in May is a tremendous track record. Considering the pace and scale of Modi’s engagements and what each visit is expected to produce, one must congratulate the MEA for measuring up to this scorching pace. This is not counting the many visitors including the Chinese and Japanese, the various multilaterals he attended, or the summit he is now getting ready to host with African nations later in the year. Modi also knows that he has to put systems in place and remedy others if India has to succeed in the decade ahead.

Government must now seriously consider immediately augmenting MEA’s strengths. It may need to draw on private talent in some cases in the short term for close follow up. While Modi is not short of new ideas and a desire to implement, the main problem is the system that has become used to not delivering or not taking timelines seriously. This flurry of visits was not an end in itself. There will be plenty of full-time follow up required, coordination between various ministries and the private sector, where they will have to work in cohesion.

As India’s footprint in the world grows and national interests morph and increase, there will be attempts to ease India out from markets and resources. With time, India’s regional security role will expand. Indian intelligence agencies will have to be helped to reorient themselves rapidly to meet new challenges relating to economic and trade interests while traditional military threats, cyber-attacks and terrorists threats will multiply.

Becoming a leading power is not going to be easy.