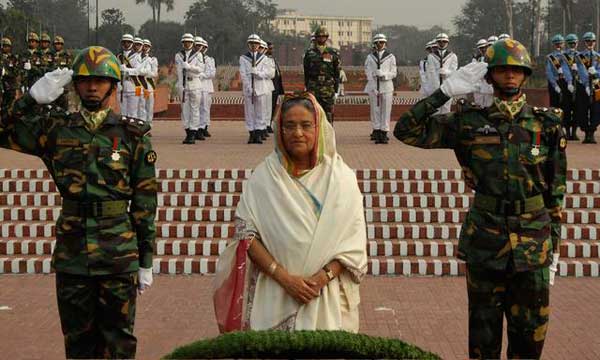 With an unprecedented landslide victory for Sheikh Hasina for a third time, the expectations of the people are naturally high.  Though the election was easy, Hasina is now faced with many challenges that need to be immediately addressed.

The first and foremost is international acceptability of the election results and cooperation in future.  The next will be to get around the opposition who are miffed with just not a defeat but a ‘rout’ and their continuing demand for fresh elections.  The third will be to keep the over enthusiastic cadres disciplined and motivated to work for the general welfare of the country.  Fourth will be, in keeping the extremist religious and radical factions under control to maintain law and order Fifth will be to continue the good economic performance that has been a creditable achievement of Hasina’s government in the last few years with Bangladesh now poised to move from its status as the least developed country.  There is of course an urgent need to deal with massive corruption and the drug menace that has bedeviled the country.  The last will be to deal with the ambitious BRI projects of China amounting to over 30 Billion dollars  without getting into a debt trap as it happened to many other countries.

The Foreign Minister A.K. Abdul Momen had his first diplomatic meeting with 55 members of the Diplomatic Corps and sought their cooperation.  He said- “We need active collaboration and partnership amongst all to achieve core goals of the Government.”  Several of the diplomats who were present assured the Foreign Minister of their support to Bangladesh in every possible way.

The European Union conveyed through its Ambassador its willingness to remain constructively engaged with the new Government and work together on issues of mutual interest like good governance, deeper economic partnership, the Rohingya crisis, migration, climate change, development cooperation and more.  The EU Envoy further explained ways as to how to approach the existing instruments of engagement in the context of Bangladesh- European Union relationship in a post LDC era.

On 18th Jan., a UN Spokesperson called upon the stake holders in Bangladesh political Sphere to engage in meaningful dialogue for a positive outcome.  This was in response to query regarding his observations on the election on allegations of vote rigging, intimidation and crackdown on opposition.  The Spokesperson did not fail to mention that it was obvious that the election was not “perfect”.

There is need for Bangladesh Election Commission to look into the allegations as speedily as possible.

It is not known as to what the response of the US Ambassador was when a delegation of the BNP with all the details of allegations of the irregularities of the election met him soon after the election results were announced.  But what is to be noted is that the expectation of the opposition parties mainly BNP that the election of Sheikh Hasina’s Government will not be accepted internationally has not come true.  This also happened soon after the last elections in 2014 when the BNP boycotted the elections and gave up without a fight!  The last to congratulate Sheikh Hasina was the OIC.

In a mammoth rally held in Dhaka on 19th January Hasina made a conciliatory statement that her administration would work for all citizens irrespective of their political affiliations or views.  She promised to do what has been mandated in the party’s manifesto in freeing the country of militancy, drugs, corruption and poverty and ensuring peace and development.

On the 13th, Hasina expressed her willingness to hold fresh talks with all the political parties.  This was welcomed by none other than Dr. Kamal Hossein of Oikya Front and said that it was a positive decision.  If Hossein thought that it would be for holding fresh elections under a “neutral” Government, he was mistaken.  There was no response from the main opposition party- the BNP

One of the opposition lawyers moved the High Court to annul the oath taking of the newly elected members of the Parliament on technical grounds.  But the High Court turned it down.  The tenure of the 10th Parliament will expire on Jan 28th and the new law makers will take charge on January 30th.

The opposition BNP is yet to come to terms with the new situation.  There is a feeling of frustration over the failure of the party in winning the elections.  There is no regret however in allowing the JEI to contest the elections in their name, though the Oikya Front Partner Dr. Kama Hossein did admit in their party’s meeting that taking Jamaat along to the Polls was a ‘mistake’.

Two senior leaders of the BNP- members of the policy making National Standing Committee- Khandekar Mosharraf Hossain and Moudud Ahmed called for reforms in the party at a discussion chaired by the Secretary General on the 18th of January.  They demanded that the party should be restructured through a National Council and tested and more devoted members should be brought to the leadership.  They said “we have been identified as failed ones- must leave the posts and leave it to the youth”.  It is doubtful whether any change can occur with Tarique Rahman still leading the party from London!  Tarique stands sentenced on charges of money laundering, corruption and above all for his involvement in the in the deadly “ August 21 Grenade attack.”.  Hasina has declared that she is determined to bring him back from London to undergo the sentence!

The Rohingya issue will continue to be a challenge for Hasina with over a million Rohingyas camping in Southern Bangladesh.  The prospect of any of those returning to Myanmar is getting bleak as days goes by and, in the meantime, the Jihadi elements within the refugee camps are getting entrenched.  The ARSA is already said to have strengthened its position among the refugees particularly among those who are still camping in the no man’s land.