Article 370: Does Jammu and Kashmir still need it? 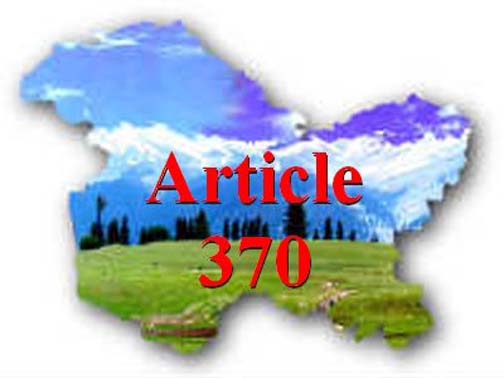 A recent landmark judgement regarding reservations in promotion has stirred hornet’s nest in the already disturbed state of Jammu & Kashmir. The judgement has declared reservations in promotions applicable to SC/ST candidates as unconstitutional.  The judgement affects 30% of the total population of the state which comprises the economically backward scheduled castes (SC) and nomadic scheduled tribes (STs).

Had there been no Article 370, the 77th, 81st, 82nd and 85th Amendments would have been applied de facto and the benefits of the same would have been passed to the 30% population of this state without much hassle.

While the majority of the SC community resides in the Jammu province the STs are spread over the entire state including the remote areas of Ladakh. The second largest ethnic community of the state, namely Gujjars, are also affected by the judgement. It is but natural that the members of these deprived, weaker and peace loving communities are angry and blame the government of the day for failing to safeguard their interests. Is their anger justified? Yes. Is apportioning the blame on the present government correct? The answer is NO. Then who is to be blamed?

The Supreme Court of India in its judgement in 1992 in the now famous Indra Sawhney case ruled that reservations in promotions under Article 16 of the Constitution of India are unconstitutional. It, however, gave five years for its continuation as a special case. Meanwhile, the Government of India in 1995, through 77th amendment to the Constitution, inserted Clause 4 (A) to continue with the reservations in promotions for the SC/ST candidates, well before the expiry of five year.

Three more amendments namely 81st, 82nd and 85th were made subsequently to make the provision stronger and widely applicable. The 82nd amendment inserted a provision in Article 335 to enable states to give concessions to SC/ST in promotions. But why were the SC/ST citizens of J&K denied benefit of these amendments to the Constitution of India? The answer is simple. The state enjoys a special status under Article 370 of the Constitution of India.

The laws enacted by the Parliament of India do not automatically apply to J&K except in the matters of Defence, External Affairs, Communication and Finance. Included in  Part XXI of the Constitution of India under “ Temporary, Transitional and Special Powers”, Article 370 accords Special Status to the state of J&K vide which all provisions of the Indian Constitution applicable to all other states are not applicable here.

As per Article 370 (1),  any  other provisions of the Constitution of India except those included in the Instrument of Accession can be applied in the State of J&K only through a Presidential Order issued in consultation with the State, meaning approval of the State Cabinet or the Governor in case of the Governor Rule.

Had there been no Article 370, the 77th, 81st, 82nd and 85th Amendments would have been applied de facto and the benefits of the same would have been passed to the 30% population of this state without much hassle. The fact is that due to Article 370, SC/ST community of J&K did not enjoy any reservation until 1991. The members of Other Backward Communities (OBCs) do not enjoy any reservation in the state till date which their counterparts in the rest of the country enjoy in the form of 27% reservation. What a sad state of affairs! The sordid story does not end here.

The tribal laws as applicable in rest of the country do not apply here. The OBCs do not enjoy 27% reservation as in the rest of the country. The Central Bureau of Investigation (CBI) has a very limited jurisdiction and the Supreme Court of India enjoys only appellate jurisdiction. All amendments to the Indian Constitution after the 42nd amendment are not applicable in the state.

Has one ever wondered that why our state continues to be backward in health sector, higher education and tourism infrastructure?

People’s Representation Act of India is not applicable because of which the Government of India cannot enforce delimitation of constituencies in the state. Despite the fact that Jammu region has more area, larger population and voters, it has only 37 seats in the Assembly as compared to 47 for Kashmir. If delimitation takes place as per the Act the number of seats would be reversed and the Jammu region would enjoy majority in the Assembly.

Prevention of Corruption Act, Domestic Violence Act, Religious Institutions (Prevention of Misuse Act), Panchayati Raj Act, Food Safety Act, Right to Information Act, Protection of Human Right Act and many more are not applicable in the state thus, denying the benefits accruing from them to the citizens of the State.

Do citizens of India know that those residents of the state who opted for Pakistan at the time of partition are welcome to return any time and reclaim their properties left behind while those belonging to West Punjab (now West Pakistan), areas neighbouring the state, who opted to settle in Jammu & Kashmir at the time of partition enjoy no rights despite being Indian citizens.

Article 370 has been more of a bane than a boon for its development and progress and for the welfare of its majority citizens, particularly the deprived and weaker.

Has one ever wondered that why our state continues to be backward in health sector, higher education and tourism infrastructure? Why Jammu & Kashmir has failed to become a health tourism destination? Why despite repeated and numerous requests by successive governments private players are reluctant to invest in J&K in tourism or other sectors? The answer is simple. While the state does not have adequate in-house professional talent, highly trained and qualified personnel and super-specialists from other parts of the country are unwilling to come because of Article 370 and restrictions imposed thereof.

It is thus, clearly evident that Article 370 has been more of a bane than a boon for its development and progress and for the welfare of its majority citizens, particularly the deprived and weaker. The judgement of the Division Bench also states “Article 370 though titled as ‘Temporary Provision’ has assumed a place of permanency in the Constitution.” A plain reading of Article 370 makes it clear without doubt that it was inserted only as a temporary provision. In any case no dictionary in this world would accept that temporary implies permanent.

Let us remove our ideological blinkers and think with a cool and unbiased mind “Do we still need Article 370?”

One thought on “Article 370: Does Jammu and Kashmir still need it?”