Are we a bad news nation? 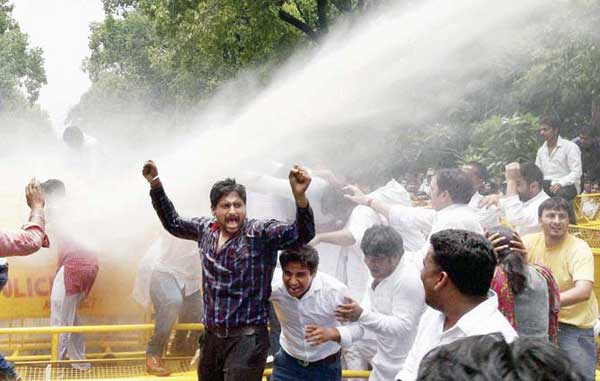 Have we have become a ‘bad news’ nation, forever self-flagellating and unable to see anything positive around ourselves? We are also showing up as a nation that is incapable of sustained action; even our so-called anger is like a straw fire that burns furiously for a while and then just as quickly dies away without a trace. The more we drown ourselves in negativity, the more others will believe the worst about us.

Only negative stories that depict us as a nation of losers get highlighted.

While the media concentrated on Lalit Modi, Sushma Swaraj and Vasundhara Raje, Mumbai lost 106 persons in a hooch tragedy. Scores have died mysterious deaths in MP, UP, and Rajasthan, but this has only now begun to be covered by New Delhi’s media after the Lalit Modi affair has been done to death.

Only negative stories that depict us as a nation of losers get highlighted. Digital India, the power sector story, or the infrastructure efforts, the story about Temsutula Imsong and her friend Darshika Shah cleaning the Varanasi Ghats, or Sri M from Kerala, who believes no religion is greater than humanity and began his Walk of Hope from Kanyakumari in February, rarely get the attention these deserve. These are small steps, maybe, but huge in the aggregate. Sadly, good news is no news.

This despondency is definitely more pronounced over the last year. And one of the explanations is that the man primarily determining our future is someone who ‘We’ did not expect to be there. He is not a member of this power elite, by birth, education or wealth and having gotten there, he seems likely to succeed in his endeavours. The strategy, then, is to prevent, by whatever means, this government from functioning so that today’s losers are restored what is their birthright, to mess it all up once again.

The rich and powerful will always be there, as they have been for centuries in all countries, no matter who the ruler. Nothing will change that because this is the way of the world. This is a world where they usually sit together to decide how to grab, retain, and, sometimes, share power and its spoils. Real power always remains with a small coterie of teflon politicians, corporate honchos, bureaucrats, and a few media barons. They survive all changes in governments.

We are at the cusp of history, and having missed the Industrial Revolution largely because we squabbled amongst ourselves and caved in to imperialism we cannot afford to miss the Technological Revolution.

Lalit Modi’s tweets and photos have a message for all to see. Not for nothing has Jairam Ramesh gone into stunned silence the moment Lalit Modi mentioned Sonia Gandhi. And after all the heat and dust, rational opinion from eminent jurist Soli Sorabjee, commentator Surjit Bhalla and others quite clearly says that the issue has been blown out of proportion and the Prime Minister was wise to sit it out.

We are at the cusp of history, and having missed the Industrial Revolution largely because we squabbled amongst ourselves and caved in to imperialism we cannot afford to miss the Technological Revolution. If we miss this chance of maximising our youths’ potential in the next decade, then this demographic advantage will not come to us again for another 300 years. This means losing it forever and being confined to low life.

Modi came to power igniting many million hopes, but in that hurry to achieve, he needs to be careful and not start too many projects and schemes that remain unfulfilled or are ill-conceived. He needs a good delivery system and that is the biggest weakness. The second being investments in industry.

If the country needs foreign investment and additional revenues, it must make investment in India attractive. It cannot simultaneously give the impression that the tax regime remains unfriendly, unstable and changeable every year.

Finally, my suggestions to the media, for whatever these are worth. You are a vital pillar of our democracy and you have great power to do good. Equally, you have great power to destroy. So please use this power judiciously. Be free and be fair. Otherwise you will lose your freedom and that will be a sad day for our democracy. Investigate, but do not be prosecutor, jury, and judge. The stakes for all of us are very high. The drift towards competitive sensationalism, driven by an unspecified agenda, threatens to push the Fourth Estate down a slippery slope. This would mean a loss of credibility, and a good reputation, once lost is difficult if not impossible to regain. Let not gloom and despondency become your theme songs. There is more to India than that.

4 thoughts on “Are we a bad news nation?”