Are the anti-Maoist operations fake? 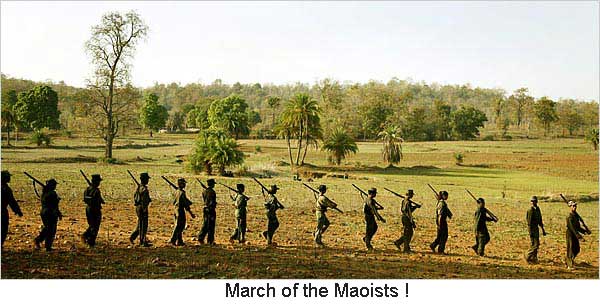 It is difficult to totally avoid collateral deaths of innocent civilians in counter-insurgency operations, but it is important to take every precaution possible to reduce such deaths.

…counter-insurgency operations themselves, instead of putting down the insurgency, become a root cause of more insurgency.

When the security forces do not exercise the  necessary care and caution to avoid collateral deaths of innocent civilians, counter-insurgency operations themselves, instead of putting down the insurgency, become a root cause of more insurgency.

The alienation of the people in the affected areas that originally gave rise to the insurgency is further aggravated by the deaths of innocent civilians. It tends to confirm the image of the Government as projected by the insurgents as uncaring and insensitive. The credibility of the Government and the security forces is damaged when the people come to know that the version of an operation as officially put out is wrong—either partially or totally and deliberately so.

This drives more people into the folds of the insurgents and strengthens their motivation and determination to keep up the fight against the Government.

Whenever the security forces claim to have killed a large number of insurgents in an operation projected by them as successful, the Government should verify their claims instead of immediately praising them  for their success.

Verification does not necessarily mean that the Government distrusts the version of the security forces. It only means that the Government wants to satisfy itself that there has been no collateral deaths — wanton or unavoidable— of innocent civilians.

Verification does not necessarily mean that the Government distrusts the version of the security forces.

If the Government does not take the precaution of verifying the facts and circumstances of operations resulting in large fatalities and if these prove to be wrong, the resulting embarrassment will damage the future effectiveness of counter-insurgency operations.

One is already seeing this in the unfortunate controversy following the claims of the security forces to have killed 20 Maoists in what was projected as an intelligence-driven and successful counter-insurgency operation in Chattisgarh’s Bijapur District on June 29,2012. The initial claims of a remarkably successful operation made by the Security Forces and the Government of Chattisgarh were accepted without due verification by Shri P.Chidambaram, the Home Minister of the Government of India, and the security forces complimented for their success.

Subsequently, doubts have been raised about the veracity of the facts and circumstances of the operation not only by human rights activists and sections of the local villagers, but also by some members of the Congress Party, who have been quoted by the media as describing the encounter as “completely fake” resulting in the death of many innocent civilians.

Our security forces are led by responsible officers and I find it difficult to believe that they would have indulged in a fake operation and tried to mislead not only the State Government, but also the Government of India under which the central para-military forces come.

At the same time, from the kind of allegations being made  by sections of the public and non-governmental activists against the security forces, one cannot totally dismiss the possibility of an unacceptable number of collateral fatalities due to reasons yet to be determined.

Instead of standing on false prestige and instead of being influenced by considerations of having to maintain the morale of the security forces by supporting them right or wrong, the Government should  hold an independent enquiry to establish facts and make amends to the relatives of any innocent villagers killed if such collateral deaths had taken place as alleged.

…one cannot totally dismiss the possibility of an unacceptable number of collateral fatalities due to reasons yet to be determined.

Since taking over as the Union Home Minister after the 26/11 terrorist strikes in Mumbai, Shri Chidambaram has taken commendable action to strengthen our counter-terrorism and counter-insurgency capabilities and to improve the quality of the operations undertaken by the security forces.

At the same time, he has shown an unfortunate tendency to rush to the  media with unverified versions of operations instead of showing the patience to have the facts verified before going public and identifying himself with the initial version which may prove to be wrong on subsequent verification.

The Home Minister is the supreme head of the counter-terrorism and counter-insurgency machinery of the Government of India. His credibility in the eyes of the people and the international community is of supreme importance. If his versions repeatedly prove to be wrong subsequently, not only his personal credibility, but even the credibility of the Indian State could be weakened.

The Home Minister of the Government of India should be the last to brief the media after all facts and circumstances have been verified to his total satisfaction. He should not be the first to rush to the media.