Another Capitulation and another Win for the TLYP in Pakistan

Ever since the Pakistan Tehreek-e-Insaaf (PTI) assumed power in August 2018, it has been struggling with many challenges. The most pressing of these has been the growing financial crisis. However, an internal challenge appears to have overtaken the economic challenge for the time being. This has come in the form of the Supreme Court’s verdict on Asia Bibi blasphemy case. Incidentally, it was the protests around this case, originating in 2010, that had led to the assassination of Punjab Governor Salman Taseer by his Barelvi bodyguard, Mumtaz Qadri which in turn resulted in the formation of the Tehreek Labbaik Ya Rasool Allah (TLYP), a politico-religious formation of the Barelvi community.

The TYLP has, since then, come to dominate religious party politics in Pakistan. It debuted a new political party – the Tehreek-e-Labbaik Pakistan (TLP)- in this year’s election, coming in as the third largest party in terms of votes polled – well ahead of the Pakistan Peoples Party even though it did not get as many seats. It has remained buoyant ever since and has been able to rally around people in large numbers to pressurise the government to fulfil its various demands. So why do governments repeatedly capitulate to its demands? And what does the TLP ‘s stunning electoral success mean for the politics of religion in general and future of Barelvi politics in particular?

Post-2001, most of the sectarian organisations belonging to the Deobandi school of thought and Shia minority were banned or put under terror watch list. However, the Barelvi-backed organisations were seen as moderate compared to other groups and were even promoted by the state so as to keep the other sects in check. They enjoyed the patronage of both the Pakistani state and the international community.

The rise of Barelvi politics in Pakistan is not a sudden phenomenon. For the most part, it has remained apolitical and peaceful sect, generally supportive of the state. Over the years, there was a growing political awakening within the sect as it was felt that it was losing its influence and appeal to other sects, especially to the Deobandis. In the sectarian turf wars with other sects, the Barelvis found themselves on the receiving end. Most of their top leaders were killed in a suicide attack carried out by suicide bombers allegedly from the Lashkar-e-Jhangvi (LeJ), which ripped through a congregation of the 12th Rabiul Awwal at the Nishtar Park in April 2006. Since then there have been many unsuccessful attempts to bring unity within their ranks as there are many groups within the Barelvi sect who compete for political and religious influence. Developments in 2015 changed the political fortunes of the Barelvis’. The first development was Mumtaz Qadri’s hanging. Mumtaz Qadri, a Barelvi, had assassinated Punjab Governor Salman Taseer. Many believed the Qadri had upheld the path ordained by the prophet by killing Taseer and he was even showered with rose petals when he was produced in the court during the murder trial.

The TLYP was founded in 2015 in Karachi at the same place where its top leadership was killed by Khadim Hussain Rizvi, a handicapped cleric who had been convicted under the 4th schedule of anti-terrorist law for his hate speeches and anti-state activities. Rizvi exploited the popular sentiments that arose after the hanging of Mumtaz Qadri. Subsequently, he successfully weaponised the blasphemy issue and brought the fractious Barelvi school together.

The first sign of the Barelvi resurgence came in the form of NA-120 (Lahore) and NA-4 (Peshawar) by-elections held in September and October 2017 respectively. The TLYR supported candidate, Azhar Hussain Rizvi, stood at third position with 7,130 votes in NA-120. In NA-4, TLYP’s Muhammad Shafiq Amini got 9,934 votes. Although, they didn’t win any seat, the percentage of votes they secured emboldened them to stand for the General Elections in 2018. The TLP fielded around 259 candidates for the National Assembly elections held in July 2018 and polled 2.2 million votes, nearly half of the Islamist vote bank. It drew away votes mostly from the PML-N, PTI and the Muttahida Majlis-i-Amal (MMA) — an alliance of religio-political parties that had emerged on the country’s political horizon by contesting the 2002 general elections. Many analysts have also described TLP as a spoiler party which managed to draw away right-wing votes from the other mainstream parties such as PML-N and PTI. The table below will help us to understand how TLYP emerged as a significant spoiler in the last general elections. 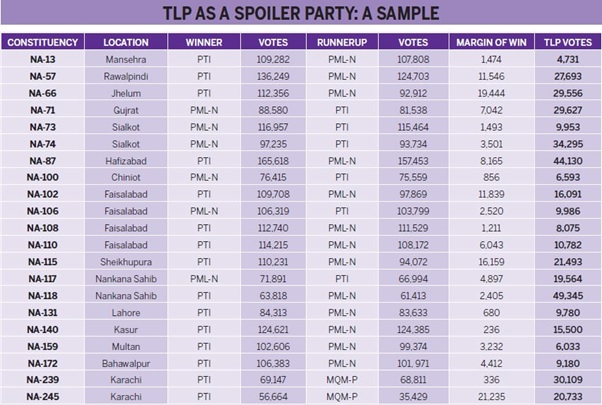 The second development which encouraged the TLYP leadership was the outcome of the Faizabad dharna in 2017. This dharna was led by the Rizvi on the issue of changes in the oath of the electoral candidates in the Khatm-e-Nabuwwat (the finality of Prophethood) clause. Initially, the then government of the PML-N did not cave into the pressure. They used force to quell the protesters. But the police action only multiplied the government’s problems amid a worsening law and order situation in Islamabad and other cities. The government called in the army to disperse hundreds of activists of a religious group camping at an arterial traffic intersection of the federal capital which they had occupied for more than three weeks. But the army refused to come to the rescue of the government; instead the army Chief Gen. Bajwa called the then prime minister Shahid Khaqan Abbasi and advised him to handle the Faizabad sit-in peacefully as “violence is not in the national interest”1. This led to the resignation of then federal Law Minister Zahid Hamid2. It is the military and the intelligence agencies which finally mediated an end to the Faizabad dharna.

The third development the TLYP touts as a triumph was the cancellation of the blasphemous cartoon competition in the Netherlands by the Dutch lawmaker Geert Wilders. The TLYP led the protest in front of the Punjab and National Assembly against the cartoon competition.

The fourth was forcing the Imran Khan government to backtrack from its decision to appoint Dr Atif Mian who is an Ahmadiyya to the Economic Advisor Council (EAC).

The fifth was the recent Supreme Court decision which acquitted Asia Bibi who was serving a death sentence for the blasphemy. Soon after the Supreme Court decision, protesters thronged on the streets, in response to a call given by the Khadim Rizvi in which other religious organisations also participated. Rizvi even called for the assassination of Supreme Court judges and mutiny within the ranks of Pakistan military in his speeches. Imran Khan addressed the nation after meeting with army chief and said that state would not surrender to the mob and threatened the protesters that they would be dealt with force. However, with no respite in sight to the demonstration and lacklustre support from the Army High command, the present government also finally agreed to negotiate with Rizvi. The government agreed to accept the TLYP’s demands to put Asia Bibi in the Exit Control list till the review petition filed in the Supreme Court is heard3. The Imran government may have survived but the state had lost another battle to the extremists.

The challenge that the TLYP poses to Pakistan’s internal stability is even more dangerous than the threat of terrorism. The TLYP has successfully created a narrative for itself as the defender of Pakistan’s ‘Islamic identity’ They have sympathisers in mainstream political parties, bureaucracy and in the armys rank and file. Pakistan has achieved some tactical gains and succeeded in creating a counter-narrative to deal with terrorism but would find it tough and challenging to create and take the ownership of any narrative which will go against the Barelvi resurgence. Even if the Pakistan state is sincere to implement the much-debated National Action Plan to curb extremism, it will still take decades to lower the current level of extremist feelings and over religiosity currently existing in Pakistani society and polity. The state also has to make sure that it stops appeasing extremists and revisit its policy of mainstreaming sectarian and terrorist organisations. For now, the TLYR has the upper hand through its strategy of implementing its political agenda through street protests.

2.Text of agreement signed with protesters, The News, November 27, 2017, athttps://www.thenews.com.pk/latest/249475-religious-parties-reach-agreement-with-govt-to-end-faizabad-sit-in