An Open Letter to Farooq Abdullah 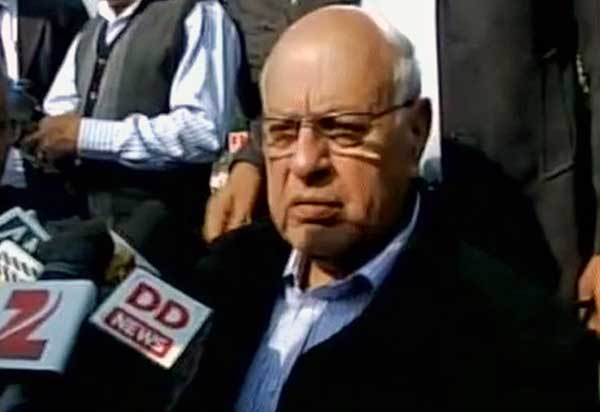 Your statements over the past few years since Kashmiris divested you of Chief Ministership /Cabinet portfolio in the Union Government, are clear indications of the fact that your desire for pursuit of power even at this stage in your life, is as strong as it was when your father anointed you as his heir. This overpowering desirehas prevented you from speaking the truth, which you, with decades in public life, are surely aware of.

You are, arguably, the smartest politician of the subcontinent, measured on the yardstick of duplicity, ambivalence and subterfuge, that defined the politics in the region after Nehru’s death. Despite enjoying all privileges that accrue from being in power as part of the Indian constitutional relationship with the State, you deliberately indulge in falsehood whenever it suits you. Over the years, your bombastic statements contributed in large measure to the creation of doubts in the Kashmiri mind and prevented State’s integration with India, even while you continued to enjoy power and pelf. It is a different matter that Kashmiris have turned you into some kind of a political Prima-Donna !

I had assumed that, of late, some of your statements could be attributed to your increasing senility, but what you spoke in the Amity School on 9 March 18, has confirmed that you are in full control of your faculties and all your statements are well thought out and, perhaps, even rehearsed.

You said recently that it was Nehru who created Pakistan and not Jinnah. This statement is in keeping with your other statements which are clearly aimed at keeping the separatists/ radical elements/ Jihadis in good humor. After all, Many Kashmiri Muslims (as also other Muslims in the subcontinent) now are convinced that creation of Pakistan did no good to them. But they dare not blame Jinnah because the next bullet from the Pakistan-sponsored militant in Kashmir would find its designated target for sure. Hence, the next best thing is to blame India/Nehru as the usual scapegoat. You add your voice to the prevailing rhetoric because the Parliamentary elections are just a year away! Right?

Pakistan, which was created for the ‘Muslims of the subcontinent’ at the time of British withdrawal, calls Jinnah the Quaid e Azam, because it recognizes his single-minded pursuit of the goal of creating Pakistan. Had you made this statement in Pakistan, you would have been tried for blasphemy! That is, in case you had escaped the gallows (or bomb blast) earlier!

The resolution for the establishment of a separate homeland for the Muslims of British India was passed in the annual session of the All India Muslim League held in Lahore on 22–24 March 1940.Jinnah topped the list of the 25 formally designated members of the Special Working Committee of the All India Muslim League, 1940, which met between 21 and 24 March 1940, and which largely drafted the Lahore Resolution.

If Jinnah was not for Pakistan, pray tell me why did Jinnah reject the Cabinet Mission Plan (Cripps Mission) which did not endorse Jinnah’s demand for Pakistan? Why did Muslim League, despite joining the interim government at the centre, not join the Constituent Assembly, but insist on the demand for creation of Pakistan?

It is true that Britain wanted to create a loyal state in the north west of India to serve its geo-strategic interests in this part of the world while they were winding up their empire. Therefore, for protecting those interests, partition of the country was a necessary pre-requisite. As early as January 29, 1946, Lord Wavell was reminded by his Secretary of State in London, about his blue print for partition, through a telegram, which stated, “It would help me to know when I may expect to receive your recommendation as regards definition of genuinely Muslim areas, if we are compelled to give a decision to this (partition).”[2]

Jinnah moved to England in 1932, where he had established his practice at Hampstead after giving up on political activity in India. However, he was persuaded by A R Dard, an Ahmadya missionary in London, who strongly argued that Jinnah owed his loyalty to the Muslims of India and he (Jinnah) cannot leave them in lurch at that crucial stage.[3]

After having returned to India, he became a willing tool of the British and fell straight into the lap of the feudal/ radical elements of his community to serve their interests by leading Muslim League on a suicidal path of creating a theocratic state.

Nehru was all along aware of the British interest in creating Pakistan. He once told the Chief of (United Nations Commission for India and Pakistan- UNCIP) Joseph, Joseph Korbel, “Pakistan is a mediaeval State with an impossible theocratic concept. It should never have been created, and it would never have happened, had the British not stood behind this foolish idea of Jinnah.”

With his undoubted brilliance to sway Muslim opinion to accept Muslim League’s demand for a separate nation for the Muslims of India, Britain found Jinnah indispensable in their scheme to partition India. They preponed the grant of independence to India from June 1948 to August 1947 as “Jinnah was in the terminal stage of tuberculosis: a closely guarded secret. The British Intelligence knew about it and this fact influenced the preponing (sic) of the grant of independence from 1948 to 1947.”[4]

It was Jinnah who drifted from Congress with which he was associated for years. Jinnah, in order to remain politically relevant, increasingly got sucked into the Muslim League’s narrow definition of ‘Two-Nation Theory’. While Nehru believed in ‘unity in diversity’, Jinnah disbelieved such unity due to conflicting ideas. Joseph Korbel quotes Nehru as having told him, “Jinnah abandoned us (the National Congress) thirty years ago and founded the League — not to defend Islam, as he asserts, but to defend privileged materialistic rights. It has nothing to do with religion; he himself is not a religious man.”[5]

Jinnah’s strength lay in his intellectual brilliance and force of his arguments. When he carried out these arguments along narrow lines, he turned into a formidable political opponent. He was the face of Muslim League and its undisputed leader. A decade before independence, no one could have imagined that a new nation, Pakistan, would be a reality in such a short time; but here it was. Its coming into being was a tribute to Jinnah’s persistence and dogged determination to see it through. All those who subscribed to his viewpoint looked up to him as the chief protagonist of their independent country. Allama Iqbal described him as “The only Muslim in India today to whom the community has a right to look for safe guidance…”[6]

As early as 1940, Jinnah said, “….If these states ( Kashmir, Bhawalpur and Patiala) willingly come into the federation of Muslim Homeland, we shall be glad to come to a reasonable and honorable settlement with them.”[7]

But the forces let loose by Jinnah’s confrontationist policy, executed through ‘Direct Action’, based on purely communal agenda, played havoc with both Hindus and Muslims. After partition, there was little trust left between the two nations to resolve the complicated Jammu and Kashmir problem, through mutual dialogue and a spirit of ‘give and take’.

Dear Farooq, what is even worse, by crediting Nehru for the creation of Pakistan, you have been less than loyal to your own father, whose differences with Jinnah on this score alone, are too well known and recorded.

Soon after turning Muslim Reading Room Party into the Jammu and Kashmir Muslim Conference in 1934, Sheikh Abdullah felt ill at ease in the company of its important leader, Chaudhary Ghulam Abbas and his other colleagues, whose increasingly mediaeval theocratic thinking dominated the political discourse in the party. With the passage of time, these differences became irreconcilable, leading to the split in the Party. Sheikh Abdullah formed the All Jammu and Kashmir National Conference and Chaudhary Abbas became the sole dictator of Muslim Conference which became a staunch pro-Muslim League party in the state.

In October 1944,Muslim Conference’s went to the extent of launching a ‘Direct Action’ campaign under Maulvi Yusuf Shah, the Mirwaiz, heeding the call given by Muslim League in Calcutta (now Kolkotta).

Sheikh Abdullah rejected the Two-Nation theory propounded by Jinnah at the All India State Peoples Conference in June 1946, and on other occasions whenever he got a chance. Similar was the strain of the resolution passed at a special convention of NC held in October, 1948, to consider the matter of accession of the state with the Indian Union. It stated, “The convention has given its serious thought to the question of accession and has examined it in all its aspects and detail. After mature consideration of the issue, it is definitely of the opinion that Kashmir, with its unflinching faith in New Kashmir and with the very advanced outlook of its people on the fundamental issues, cannot find its proper place in Pakistan which today has become a main citadel of reaction and decaying feudalism… Pakistan, with its basis in ‘Two-Nation’ theory and its persistence on the perpetuation of religious distinctions, does not and cannot accommodate a programme and an outlook which is the very negative of its basis and conceptions of social justice.”[8]

Sheikh Abdullah once again declared in the Jammu and Kashmir Constituent Assembly, “We the people of Jammu and Kashmir have thrown our lot with Indian people not in the heat of passion or a moment of despair, but by a deliberate choice. The union of our people has been fused by the community of ideals and common sufferings in the cause of freedom.”

Addressing the Constituent Assembly of the state, Sheikh Abdullah again said on November 5, 1951, “…We are proud to have our bonds with India, the goodwill of whose people and government are available to us in unstinted and abundant measure… The Indian Constitution has set before the country the goal of secular democracy based upon justice, freedom and equality for all without distinction. This is the bedrock of modern democracy.”[9]

It is a different matter that Jinnah was himself terribly dissatisfied by what he got at the end of his viciously communal campaign to create a separate state for the Muslims of the subcontinent. In the end, what he got is best described in his own words; “a moth-eaten Pakistan.” Ajeet Jawed, a well-known author, who has written a widely acclaimed book on Jinnah, writes, “He was a sad and a sick man. He cried in agony, ‘I have committed the biggest blunder in creating Pakistan and would like to go to Delhi and tell Nehru to forget the follies of the past and become friends again.”[10].TIME magazine of December 23, 1986, confirms, “The final judgement rendered by the wealthy lawyer from Mumbai who carved out Pakistan for the Muslims of South Asia, as Jinnah put it: “Pakistan”, he said, “has been the biggest mistake of my life.”[11]

[3]After the Round Table Conference of 1932, Mohammad Ali Jinnah had been disillusioned about Indian politics. The major reasons for this were both the hardline Hindu “attitude” and Muslims who were either “flunkeys” of the British or “camp followers” of the Congress. After feeling “utterly helpless” he decided to quit Indian politics for good. A. R. Dard met Jinnah in March 1933 and tried to convince him that the Indian Muslims were bereft of good leadership and desperately needed a sincere politician like him. Such was the force of Dard’s advocacy that Jinnah relented. (The Return of Jinnah, 1974, Ammar Ahmad, Oct 11..Downloaded from Net)

[11] This statement is recorded in the TIME magazine of December, 23, 1996. The magazine attributes this statement to Jinnah’s doctor who was attending on him at his death bed.

2 thoughts on “An Open Letter to Farooq Abdullah”