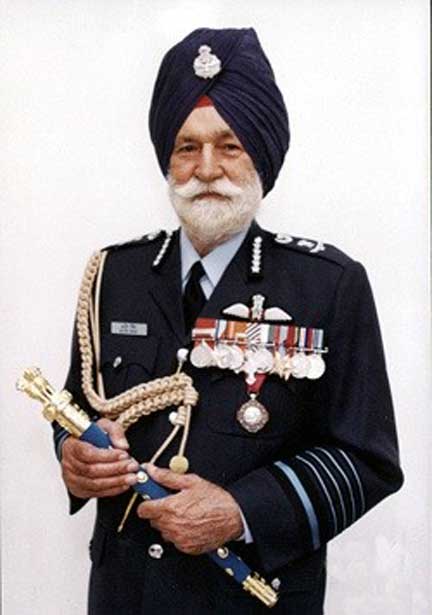 William Wordsworth wrote: “Bliss was that dawn to be alive, But to be young, was very Heaven”. Arjan Singh, was blessed to be born in 1919 and became the Air Chief of India at the young age of 45. He was the hero of the 1965 war and covered the country with glory in all diplomatic assignments that he held thereafter. He flew the fly past of RAIF aircraft over the Red Fort on 15th August 1947 and rose from his wheel chair at the age of 96 to salute the mortal remains of Dr. A.P.J. Abdul Kalam. The accolades and honours like Padma Vibhushan in 1965 wore on him lightly.

I had the rare privilege of meeting him in an Air Force party on the Air Force Day. It was indeed an unforgettable evening for me, as several retired Service Chiefs had come to the Air Force mess to commemorate the day. Marshal of the Air was the last to arrive; and I distinctly remember how everyone made a beeline to shake his hands and possibly share a few words. I found it befuddling, as the Delhites are prone to throng around people who are powerful and or in active service. The superannuated try to seek attention and company of others in such parties often unsuccessfully. When I asked Air Marshal Browne to unravel the riddle, he told how the Marshal of the Air had given away all his landed property to get a Home for retired Airmen built in Chandigarh and stays in a modest 2 room flat in Delhi. Arjan Singh was aware of his modest moorings in Lyallpur Punjab, where his father was a Lance Daffadar and retired as a full Risaldar in the Cavalry. His grandfather was also a Risaldar Major. He really cared for the retired airmen. I recall, when it was decided by the Ministry of Defence in 2007 to give pensionery benefits to the Field Marshals and Marshal of the Air at par with the last pay drawn by them retrospectively, the Defence Secretary carried the handsome cheque to the Marshal’s residence. Arjan Singh merely smiled and passed on the entire proceeds to the retired airmen and their family members.

The Marshal was an ace pilot who also almost faced a court martial in 1945 for training a pilot how to conduct a low level air pass over a house in Kerala. In his defence he had stated that such tricks were needed by every cadet to be a fighter pilot. No wonder, the trainee later became the Air Chief Dilbag Singh! He was decorated with Padma Vibhushan in 1965 for his invaluable contribution to the Indo Pak War, when he ensured that the collateral damage to the civilians was the minimum. He carried out the advice given by the then Prime Minister Lal Bahadur Shastri to the hilt. Like Shastri he was simplicity personified, as he drove his own car to every public function he was invited, till he was compelled to use the wheel chair. He was in many ways like the redoubtable CPM leader Mr. E.M.S. Namboodiripad who gave away all his land, and defeated the Congress party to become the first non-congress Chief Minister in Kerala in 1957. Unlike his other comrades EMS practiced what he preached and lived a very frugal life and wrote copiously on land reforms. He was severed by all people, cutting across party lines. Similarly Air Arjan Singh never courted controversy, shunned publicity and was the darling of all the services. He was first one to suggest to the Air Force Service Chief that women should be recruited into the IAF.

The Indian Air Force has a very proud record in defending India’s sovereignty. It supported the Army commendably during the Kashmir operation (1947) and the Goa Operation (1961). During the siege of J&K by Pakistani intruders, the IAF provided close air support to the Indian troops. Vampires were used to provide air support to the ground forces before Portuguese surrendered to India in 1961. The 1965 war was Arjan Singh’s crowning glory when as the Air Chief the IAF he carried out independent raids against PFA he bases situated deep inside the Pakistani territory. The nimble IAF Gnats proved effective against F-86 Sabre Jet of PAF, earning the sobriquet “Sabre Slayer”. Despite having been qualitatively inferior in regard to our fighter aircraft assets, the IAF achieved air superiority in three days in the 1965 war against Pakistan and destroyed 94 PAK aircrafts, before they surrendered. The Air Force is the most technology savvy service, which spends close 40% of the modernization budget of the defence services. It is, therefore, in the fitness of things that the women become part of this proud service. The High Court has ordered that the women officers of IAF should be given permanent commission. This was long overdue. In a male chauvinist environment, the lady officers can justifiably thank Arjan Singh for his chivalry & foresightness that permeated his entire career.

The country is now headed by woman cabinet minister, a first time in India’s cabinet history. As we move up the ladder from our blinkered notions on the role of women in public life and matters military, the permanent commissioning of women in the defence services would indeed break the glass ceiling of male chauvinism.

As the nation pays homage to this great soldier, we have made amends to the huge faux pos when Field Marshal Manekshaw, the war hero of 1971, was given only a state funeral in Wellington (2008), without the Service Chiefs and the then Defence Minister being in attendance. Protocol seemed to stand in the way. Civility in public life and courtesy to our national heroes must transcend the barriers of bureaucracy. In Arjan Singh’s death, the effusive warmth it has generated would always make us remember the unique values that he always nurtured.