A Popular Revolt Suppressed in Blood 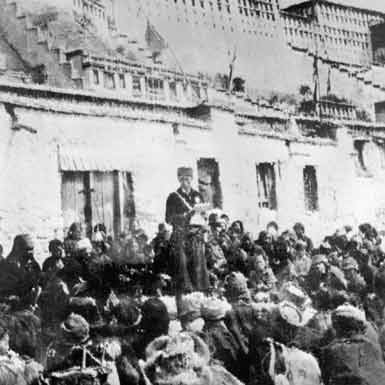 The origin of the Tibetan luni-solar calendar, composed of either 12 or 13 lunar months, each beginning and ending with a new moon, is not clear. However, many scholars attribute the 60-year cycle to India; it would have been introduced into Tibet by Chandranath and Tsilu Pandit in 1025 CE. The calendar’s main characteristic is that, like the Chinese zodiac, twelve animals are associated with the five elements, making it a cycle of six decades.

Recently we entered the Earth/Boar Year; it is worth remembering the momentous events which took place during the previous Earth/Boar Year when the Roof of the World witnessed a popular revolt.

Early March 1959, the Dalai Lama had been invited to a theatrical performance in the Chinese Army camp in Lhasa; in his memoirs the Tibetan leader recalled that on March 8, 1959, some Chinese officers called on his Bodyguard Regiment’s Commander to brief him about the function: “the Chinese authorities wanted us to dispense with the usual formality and ceremony of my visits.” No Tibetan soldiers were to accompany the Dalai Lama: “only two or three unarmed bodyguards if absolutely necessary;” the Chinese wanted “the whole affair to be conducted in absolute secrecy.”

Though the Dalai Lama accepted to go “with a minimum of fuss and to take along only a handful of staff,” it was not acceptable to the population of Lhasa. On March 10, while walking in his Summer Palace (Norbulinka or Jewel Park) the Dalai Lama heard loud noises at a distance, people “were pouring out of Lhasa and heading in our direction. They had decided to come and protect me from the Chinese. All morning their numbers grew. …By noon an estimated thirty thousand people had gathered” …it was the entire population of the Tibetan capital.

Apart from the Dalai Lama’s version, we have the first-hand account written by Major SL Chhibber, the Indian Consul General in Lhasa.

Sixty years later, reading these accounts, one is struck by the fact that March 10 ‘Uprising’ (as the Tibetans call it), was primarily a people’s movement like the Bastille Day in 1789 in France. It was an entirely spontaneous revolt with its origin in the resentment of the ‘masses’ against the occupiers.

In his report to the Ministry of External Affairs, Chhibber wrote: “In the history of movement for free Tibet the month of March 1959, will be most historic, as during this month Tibetans high and low, in Lhasa openly challenged the Chinese rule in Tibet. They set up an organisation called Pho Mimang Ranchen Chi Chog, meaning, ‘Tibetan Peoples Independent Organisation’; [they] renounced the Sino-Tibetan Agreement of 1951; staged demonstrations to give vent to their anti-Chinese feelings and demanded withdrawal of the Chinese from Tibet.”

Unfortunately on March 20, the PLA started “an all-out offensive against the ill-organised, ill-equipped, untrained-Tibetans with artillery, mortars, machine guns and all types of automatic weapons, [it] was short lived.”

A few thousand Tibetans lost their lives during the next few days.

Chhibber continued his description of the events: “His Holiness the Dalai Lama, smelling danger, left Lhasa secretly on the night of the March 17, 1959, with important members of his personal staff, three Cabinet Ministers and members of his family for Lhoka area (south of Lhasa), where at that time Khampas had full sway and from where it was easier for him to escape to India if need arose.”

The rest is history. The Dalai Lama crossed the Indian border, north of Tawang on March 31 and was received by Indian officials who gave him a letter from Prime Minister Nehru, welcoming him …as a refugee.

The popular movement had started in 1955 in Kham province of Eastern Tibet and had spread to the North in Amdo and Golok regions: “In 1955 and 1957 it took shape of an open revolt against the Chinese regime in these areas. These people, though did not succeed, but they were a constant headache to the Chinese who had to resort to aerial bombing and deploy large number of forces to subjugate the local inhabitants. During operations numbers of monasteries were destroyed and the local people suffered heavy losses,” explained Chhibber.

In March 1959, the Tibetan ‘masses’ (a term so dear to Mao Zedong), “thought it was high time for a general uprising. The Chinese did not sit quiet. …They started preparing themselves for the show down; fortified their offices and residences with sand bags, dug trenches and prepared fire positions, all cadres were issued arms and ammunition …stored rations and dig wells on their promises and increased the strength of their troops considerably in and around Lhasa.”

Chhibber commented: “The feelings were running very high against the Chinese and the public was restless and any excuse would have served to mobilize them.”

In conclusion of his March Report, the Indian Consul wrote: “The future of Tibet is dark and only a miracle can save Tibet from the clutches of the Chinese Communist Colonialists.”

Sixty years later, no miracle has taken place, though the Dalai Lama’s escape triggered the first clashes with China on the Indian border a few months later.

There is another twist to the story; since 2009, China celebrates March 28, the bloody end of the revolt in Lhasa, as the Serfs Emancipation Day; on that day, the Communist ‘reforms’ could finally be implemented on the Roof of the World. The Tibetan government was declared ‘illegal’ by Communist China as the so-called serfs had been liberated from feudalism and theocracy …by guns.

It is sadly ironic as the March 1959 revolt was only the Tibetan masses’ reaction against the occupiers.

Unfortunately, sixty years later, the 1959 ‘uprising’ has been forgotten and politically, the Dalai Lama is more isolated than ever; no nation being ready to antagonize China, which has become the second most-powerful nation of the world …and is dreaming to become the most powerful.

It is worth quoting from another Indian officer, RS Kapoor posted as the Trade Agent in Gyantse in 1959; he told Delhi: “While the heart of Tibet was bleeding the free world only made speeches. With the end of the debate on Tibet in the United Nations, Tibetans lost all hopes of their survival, stare at the sky with blank eyes and ask, where is the Buddha? How can the world witness such brutal acts on a race that has always wanted to live in peace?”

Interestingly, in January 1957, while on a visit to India, Zhou Enlai, the Chinese Premier had pointed a finger at non-existing foreigners in Lhasa: “those bent on trouble are preparing for an incident in Lhasa. These people have some armed forces. Some three temples in Lhasa have also armed forces and they want to create an incident with the People’s Liberation Army there. If it happened, then there would be bloodshed.”

And bloodshed there was, but it firmly consolidated the position of the Communist regime which still controls the restive nation with an iron hand.

This article A Popular Revolt Suppressed in Blood appeared in Strategic News International.

One thought on “A Popular Revolt Suppressed in Blood”