A Peep into Kashmir History-Prehistoric to Pre-Independence Times

Kashmir in a Nut-Shell

In this jet-setting age of hypersonic super weapons, there is time only for only gists, summaries and commentaries.

Three decades or so earlier, one could safely and securely move about in any remote corner of Srinagar even at the dead of night. Any wrong doer would stand isolated, pinned down and duly prosecuted. But today the Kashmir valley is passing through a critical period. The wrong doer gets lost in the crowd, who later dares to issue even a ‘press hand-out’ justifying the wrong deeds. The polity is in a bind, the public is not ‘free’ and the situation appears to be calm, but one can feel the tension and suspicion in the air. Backwardness has become a reality rather than a perception. Fundamentalism and social insecurity due to omnipresence of multiple terrorist and radical outfits has proliferated the already complex situation in the state. Although the level of violence keeps fluctuating towards relative calm due to relentless effort by all stake holders, the era of days gone by is still a distant dream. The misperceptions and lack of clear understanding and direction is creating vicious security dilemmas.

A poll was taken at my end to understand the knowledge of average Indians about Kashmir. The results didn’t come as a big surprise and therefore, a series of three focus articles have been compiled which will follow in quick succession and give a “Know it yourself kit on Kashmir”.

The first of the three covers the period from Pre-historic to Pre-Independence times.

The word Kashmir is an ancient Sanskrit word which literally means Land of Kashyap Rishi. Kashyap Rishi was one of the Saptarshis, who played a key role in formalizing the ancient Historical Vedic Religion. According to the “NilmatPuran,” the oldest book on Kashmir, in the Satisar, a former lake in the Kashmir Valley meaning “lake of the Goddess Sati,” lived a demon called Jalodbhava (meaning “born of water”), who tortured and devoured the people, who lived near mountain slopes. Hearing the suffering of the people, Kashyap, a Saraswat Brahmin, came to their rescue. After performing penance for a long time, the saint was blessed, and therefore Lord Vishnu assumed the form of a boar and struck the mountain at Varahamula, boring an opening in it for the water to flow out into the plains below. The lake was drained, the land appeared, and the demon was killed. As a result of the hero’s actions, the people named the valley as “Kashyap-Mar”, meaning abode of Kashyap, in Sanskrit. The name “Kashmir,” in Sanskrit, implies land desiccated from water: “ka” (the water) and shimeera (to desiccate). In modern times the people of Kashmir have shortened the full Sanskrit name into “Kasheer,” which is the colloquial Koshur name of the valley, as noted in Aurel Stein’s introduction to the Rajatarangini metrical chronicle. 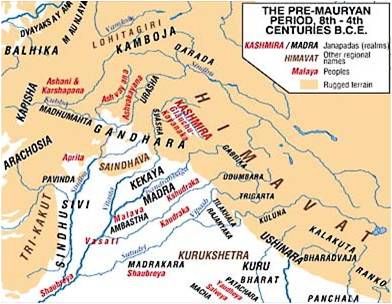 The recorded history of Kashmir, though partially shrouded in myth, extends back nearly three thousand years. Throughout that time Kashmir has been recognised, to a degree matched by few, if any, other areas of South Asia, as a culturally and physically distinct entity. Though subject for brief periods in ancient times to various powers ruling over much of the Indian subcontinent — notably the Mauryas, Kushanas, Guptas, and Hunas, in that order — Kashmir generally remained, until its incorporation into the Mughal Empire in 1586, an independent state.

This map depicts the area encompassing Kashmir as it existed in the 6th – 7th centuries CE during what might be considered the late Classical period. Over most of the period, Kashmir was a small, independent state. Existing on the periphery of a politically fragmented India, it also maintained commercial and cultural ties with Central and Southwest Asia. The situation depicted here is that which prevailed shortly before the mercurial imperial expansion of Kashmir in the reign of the Karkota monarch, Lalitaditya (724-761 CE). Following this reign, the state lapsed back into its customary position of relative weakness.

Kashmir Under the Mughals 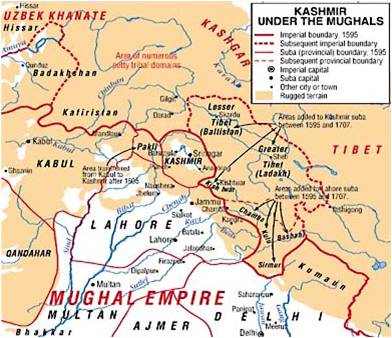 The Mughal conquest and annexation of Kashmir in 1586 ended a nearly millennium of continuous Kashmiri independence and ushered in one of several periods during which an external power extended the territory of the political entity known to the outside world as Kashmir to well beyond the actual area of Kashmiri language and culture. Thus, by the death of the Emperor Aurangzeb in 1707, the Mughal Suba (province) of Kashmir was extended to include the greater part of what was later to be incorporated within the Dogra domains. It then included both Ladakh and Baltistan, but the core area of the Dogras, centered on Jammu, remained a part of Lahore Suba.

Expansion of Jammu and Kashmir Under the Dogras 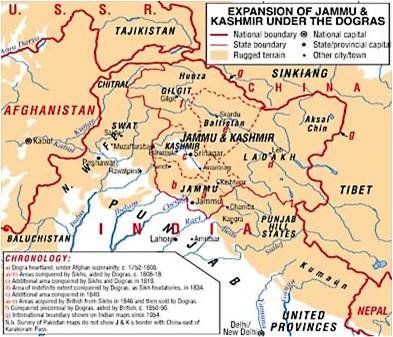 The final period of Kashmiri expansion occurred under the Dogra dynasty of Jammu, which ruled the state from 1846 until the partition of India in 1947. Jammu and Kashmir State wascreated under the Treaty of Amritsar between the East India company and Raja Gulab Singh of Jammu who bought Kashmir Valley from the East India Company for Rs.75,00,000 and added it to Jammu and Ladakh already under his rule. Kashmir Valley is a Muslim majority region speaking the Kashmiri language and a composite cultural identity called Kashmiriyat transcending religious barriers; the people are hospitable and engage in Sufi tradition.[1] This century witnessed a remarkable increase in the area and, consequently, in the cultural heterogeneity of the state. This accomplishment was due in large part to military and political assistance from the British Raj without whose imperial protection the territorial coherence of the state might not have been maintained.

The movement against the repressive Maharaja Hari Singh begins; it is brutally suppressed by the State forces in July 1931. Rumors of an alleged de-secretion of the Quran by a Hindu Policeman in Jammu led to a series of violent protests which were brutally quelled by the Maharaja’s forces which led to the shooting and killing of 21 people in Srinagar on 13 July 1931.[2] The predominantly Muslim population was kept poor, illiterate and was not adequately represented in the State’s services. In 1932 Sheikh Mohammed Abdullah(“Sher-i-Kashmir”) sets up the All Jammu and Kashmir Muslim Conference to fight for Kashmiri freedom from the Maharaja’s rule, which would branch off to become the National Conference in 1939. The Glancy Commission appointed by the Maharaja publishes a report in April 1932, confirming the grievances of the State’s subjects and suggests recommendations providing for adequate representation of Muslims in the State’s services. Maharaja accepts these recommendations but delays implementation, leading to another agitation in 1934. Maharaja grants a Constitution providing a Legislative Assembly for the people, but the Assembly turns out to be powerless.[3] In 1946 National Conference launchesthe “Quit Kashmir movement” demanding abrogation of the Treaty of Amritsar and restoration of sovereignty to the people of Kashmir. Sheikh Abdullah is arrested.

The Kashmir conflict which had its genesis in the birth of two nations India and Pakistan continues to be unresolved to this day, fueling a bitter conflict lasting over seven decades.