A Nation without a Memory is a Dead Nation 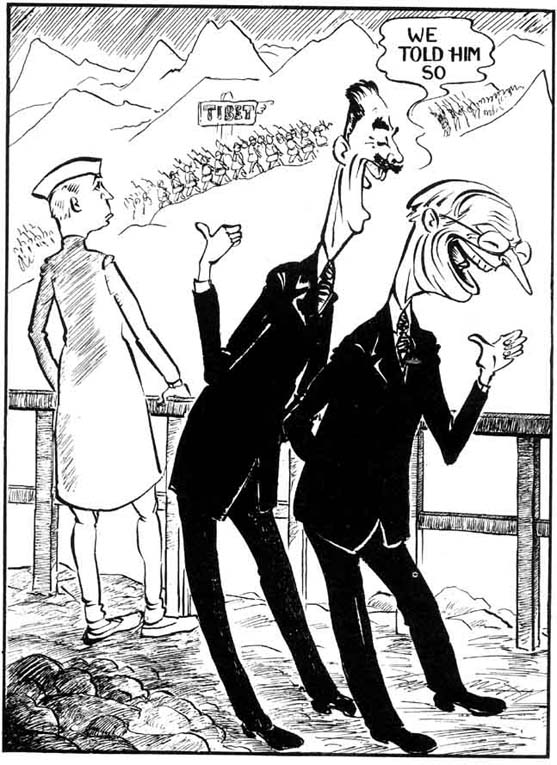 by Shankar, November 5, 1950 US President Truman and Secretary of State Acheson when the Chinese entered Tibet. Source: https://1.bp.blogspot.com/-KUk9O2VCJww/X59hSrMLLuI/AAAAAAAAfM4/RsIitN3ia0Q7WaUB-sP0ZdhabkSBR_5zgCLcBGAsYHQ/s765/C19%2Bshankar-4.jpg

I wrote for Friends of Tibet about The Importance of Memory

October 7, 2020 marked the 70th anniversary of the Chinese People’s Liberation Army (PLA) crossing the Upper Yangtze, entering into the territory controlled by Lhasa and advancing towards Chamdo, the capital of Kham province. While invading Eastern Tibet, Beijing asserted that it was ‘liberating’ the Land of Snows.

It was indeed a great tragedy for the Tibetan Nation, but perhaps worse is the fact that today the world seems to have completely forgotten what befell the Land of Snows.

Since the beginning of the 20th century, His Holiness the Dalai Lama’s native country had all the attributes of a sovereign State (a government, a language, a script, a flag, a (weak) army, coins, stamps, etc); for centuries, the Land of Snow also had unhindered relations with India, first and foremost, in the cultural and spiritual domains (Tibetan Buddhism originates from Nalanda), but also economically with countless ‘silk’ roads across the Himalaya; in other words, there was a deep kinship between the two nations.

This has been forgotten by many.

A nation without a memory is a dead nation

That is why one can only welcome the initiative of Friends of Tibet to open a Research Page on their website; in their own words, their objectives are: “to conduct and publish research on the unique heritage, legacy and history of Tibet, before and after Chinese occupation.”

To keep the memory alive, research is necessary.

Let me give a personal example.

Lost memory is what motivated me to record the history of the relations between India and Tibet between 1947 and 1962; Why? Today, the world is facing China’s formidable propaganda machinery, which is able to paint in white what is black and vice-versa. I have already mentioned the ‘liberation’ of Tibet which, in fact, was its enslavement.

To give a more precise example, the last volume of my four volumes (1958-1962) witnessed the most dramatic events not only for the Tibetan nation, but also for the bilateral relations between India and Tibet; it first saw the consolidation of the Chinese military presence on the plateau facing the Indian borders, then the Uprising of the Tibetan masses in March 1959, which prompted His Holiness the Dalai Lama to flee to India, where the Tibetan leader and tens of thousands of his followers became refugees: the Chinese propaganda projected the March 1959 events as the ‘emancipation of the serfs’, though the reality was the exact opposite.

Very few today remember the Indian Trade Agents in Gartok, Gyantse and Yatung or the Consul General of India in Lhasa who played such an important role in the life of the Himalayan nation and the silk roads with India. More than ever, it is necessary to remember the past to understand the present.

During the last two years before the 1962 border war, many realized that an era was coming to an end; Mao’s China did not want any Indian presence in Tibet, China’s ‘new colony’. A sense of jealousy towards India prevailed; Beijing clearly resented the existence of an age-old civilizational relation between India and Tibet;, it wanted to erase all traces of Indian presence in Tibet. It is what the Communists did.

Trying to reconstitute what happened from the few sources available is always a hard job, but ultimately a satisfying one.

Using new sources, I managed to uncover some not-too-well known aspects of the 1962 China-India war, in particular, the five-year ‘training’ of the PLA during the Tibetan insurgency which greatly helped the Chinese forces in becoming familiar with the terrain and other logistic difficulties on the plateau.

In a previous volume, I quoted Apa Pant, the Political Officer in Sikkim, saying that the Chinese officers were not interested “in harmony and compassion but in power and material benefit”; Pant spoke of the confrontation of two different worlds: “The one so apparently inefficient, so humane and even timid, yet kind and compassionate and aspiring to something more gloriously satisfying in human life; the other determined and effective, ruthless, power-hungry and finally intolerant. I wondered how this conflict could resolve itself, and what was India’s place in it.”

An ancient world disappeared in 1962 and in the process, India lost a friend, a kind neighbour and a peaceful border.

The Relations between India and Tibet

Cultural relations between India and Tibet are as old as the Himalayas.

Historically, the first contact occurred when Nyatri Tsenpo was enthroned as the first king of Tibet (Yarlung dynasty) in 127 b.c. The king is said to have belonged to the Sakya clan (Buddha’s family) and to have ‘landed’ in Central Tibet from India with the help of a legendary ‘sky-rope’.

However, modern research in the pre-Buddhist Tibetan civilisation have revealed the presence of a highly developed culture on the Roof of the World, the Bon faith, long before Buddhism was introduced. This culture, which flourished in the kingdom of Shangshung (Western Tibet) had constant contacts with India as well as Central Asia; its script (Mar-yig) probably derives from an old brahmi script.

The relations with the Roof of the World took a new turn during the period known as the First Propagation of the Buddha Dharma in Tibet (VII-VIII century A.D.). Many great Indian Masters such Padmasambhava and Sankarakshita visited Tibet and Buddhism became the religion of the court. The present Tibetan script and grammar were brought from India by a Minister of King Song-Tsen-Gompo in order to translate Buddhist scriptures,

The Second Propagation (X-XI century) is considered by many scholars as the Renaissance in Tibet. The temples and gompas (viharas) of Tholing and Tsaparang in Western Tibet (as well as Alchi and Tabo in the Indian Himalayas) witnessed an extraordinary explosion of Buddhist Art, Literature, Architecture and Spirituality. The origin of this renaissance was India.

The Indian source of inspiration dried up with the Muslim invasion of North India (XII-XIII century). All remnants of Buddhist culture and knowledge disappeared from the sub-continent. Tibet had to turn towards Mongolia and then China to seek protection. Eventually the Tibetan Lamas became the gurus of the Mongolian Khans and the Manchu Emperors.

However for Tibet, India remained the Sacred Land: Aryabhumi.

Many aspects of Tibetan history and civilization need to be researched and recorded. I particularly think of the necessity to preserve the Tibetan System of Medicine or Sowa Rigpa (‘The Art of Healing’). If not done, China will do it …with Chinese characteristics.

Beijing recently applied to get the UNESCO Intangible Cultural Heritage status for the Tibetan Art of Healing; it has submitted an application to the Paris-based UNESCO.

China says that Tibetan medicine, which originated from the ‘Qinghai-Tibet Plateau’ in the 7th century is one of the world’s four traditional medicines: “It has been well known in neighboring countries such as Nepal, Mongolia, Russia, Bhutan and India as well as European countries in the 8th century.”

The age-old connection with the Indian medicinal systems such ayurveda has been relegated to just be “well known in neighboring countries.”

I am happy that Friends of Tibet has already started posting research papers on Sowa Rigpa in this section.

The possible research topics are countless, whether in the religious and spiritual realm, in art, poetry, painting, architecture, or sociology; it has never been so important to record the rich heritage of the Tibetan nation, even if world politicians, in their egoism and their eagerness ‘to do business with China’ are still reluctant to admit that there is such a thing as a Tibetan Nation.

I have to add that some fifteen years ago, it was a real pleasure for me to work with Friends of Tibet and write the text giving the background of a number of exceptional cartoons on Tibet.

The survival of the Land of Snows depends today on the research on Tibet’s past as well as a vision for the future; this needs to be looked into with a modern and scientific mind. Hopefully, the world will soon change for the better and His Holiness the Dalai Lama’s Land of Snows will be able to play again a role in the Concert or Nations; in the meantime, it is crucial to preserve of the Memory of this unique nation.

Let us hope that the initiative of Friends of Tibet will be emulated.