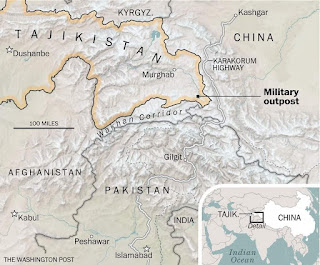 A couple of weeks ago, The Washington Postpublished an article titled: “In Central Asia’s forbidding highlands, a quiet newcomer: Chinese troops”; it reported : “Two miles above sea level in the inhospitable highlands of Central Asia, there’s a new power watching over an old passage into Afghanistan: China.”

According to interviews, satellite images, photographs, and firsthand observations by a Post journalist, it was found that Chinese troops have settled in one of the most strategic areas of central Asia, termed ‘a choke point in Tajikistan’.

The US newspaper said: “Tajikistan — awash in Chinese investment — joins the list of Chinese military sites that includes Djibouti in the strategic Horn of Africa and man-made islands in the South China Sea, in the heart of Southeast Asia,” adding “the modest facility in Tajikistan — which offers a springboard into Afghanistan’s Wakhan Corridor a few miles away — has not been publicly acknowledged by any government. But its presence is rich in significance and symbolism.”

The region has been (and is) still highly strategic.

Last year a publication The 1959 Tibetan Uprising Documents: The Chinese Army Documents was released on Kindle. It was a collection of top secret documents of the Military Intelligence of the People’s Liberation Army (PLA), dating from the end of the 1950s till the 1962 War with China.

At that crucial time, China had a serious problem; it did not have an Air Force in a position to take on the Indian Air Force. The compiler of above papers noted: “disadvantage of the Chinese Air Force is still a major problem in case of a conflict with India. Indian jets can start at a low altitude with a full load of bombs and plenty of fuel. Also, India has many airports only about a hundred kilometers from the highest peaks of the Himalaya. The short distance and the higher bomb load means each Indian jet is at least twice if not three times more effective than a Chinese aircraft.”

Apart from the fact that many airplanes had been sent to the Korean front and that the Soviet Union had stopped supplying spare parts for the MIG fighter planes, the PLA Air Force (PLAAF) had a major hurdle, no fuel for its few planes.

The amount of gasoline reaching the plateau from China via the Qinghai-Tibet or the Sichuan-Tibet highways, was not enough to maintain a large occupation force on the Tibetan plateau (read the Indian borders) and at the same time, provide the necessary fuel for the PLAAF.

One of the published documents mentioned secret statistics for ‘border trade’ and the import of fuel, gasoline and other commodities between 1953 and 1967.

But import from where?

There was no possibility of any gallons passing unnoticed through Nathu-la or Jelep-la, the two main passes between Sikkim and Chumbi Valley (Tibet); ditto for the passes in Uttarakhand or NEFA (Arunachal Pradesh today), or even Demchok in Ladakh, which had been closed for trade by the Chinese.

The author of the publication presumed that ‘corrupt’ Indian officials had let the fuel be smuggled in. That too was not possible, first the officers of the Indian Frontier Administrative Service posted in these areas, were the most upright people and in any case, considering that a mule could only carry 40 kg per trip it would have meant thousands and thousands of mules, which did not exist on the plateau …and they would have to have been transparent.

After pondering the issue, my conclusion was that this amount of gasoline could not have crossed any Indian or Nepalese border post into Tibet. It left few other possibilities. One was the Soviet Union, though it had just split with China; the relations between Beijing and Moscow had reached a breaking point by 1959.

The only possibility was some under-the-table purchases through corrupt officials in Tajikistan or Kyrgyzstan; I got convinced that the gasoline had come from the same area in Tajikistan where China is today building a new base, at the edge of the Wakhan corridor and Xinjiang.

An interesting lead: Tursun Uljabayev, the Party Secretary of Tajikistan in 1960 was sacked and imprisoned for serious corruption, a year later. In all probability, gasoline from Tajikistan was transported to Kashgar (or Tashgurgan) in Xinjiang and then taken over the Aksai Chin to be used in Western Tibet. It could have been done at night via the road cutting across Indian territory, which was the best protected artery in China in the 1950s and early 60s as only the PLA was allowed to use it; the traffic could have gone unnoticed for several months.

It was probably why Uljabayev was caught and the import of gasoline into Tibet drastically fell in 1961 …and 1962 China had no fuel for its aircrafts.

The above findings have two important corollaries; one, it confirms that the Chinese had no Air Force in flying condition at the time of the 1962 conflict with India, having no spares and no fuel. This was recently confirmed to me by Wing Commander ‘Jaggi’ Nath, who extensively flew over Tibet in secret missions between 1960 and 1962; he was awarded his first Maha Vir Chakra medal for this (he got his second in 1965 for mapping the Pakistani defenses). The second upshot is that the area where the Chinese are today building their new base, is highly strategic, being a relatively easy link between the oil-rich Central Asia, Afghanistan (through the Wakhan corridor), the restive Xinjiang (the hub of Xi Jinping’s Road and Belt Initiative) and Tibet.

This raises another issue: why did the Indian government, which had all the information about the situation in Tibet, the deployments of the PLA on the plateau and the lack of Chinese Air Force (‘Jaggi’ Nath was never attacked or even followed during his regular sorties over Tibet), not use its jets to pound the PLA concentration near the Thagla ridge in the Tawang sector, in Walong area of Eastern NEFA or in Rezang-la in Ladakh?

The only answer is, a woeful lack of leadership.

Let us hope that the present bosses watch what is happening in this area.