A forgotten hero in the Mumbai terrorist attack...

Do you know who this person is? No idea?

OK, let me tell you him. 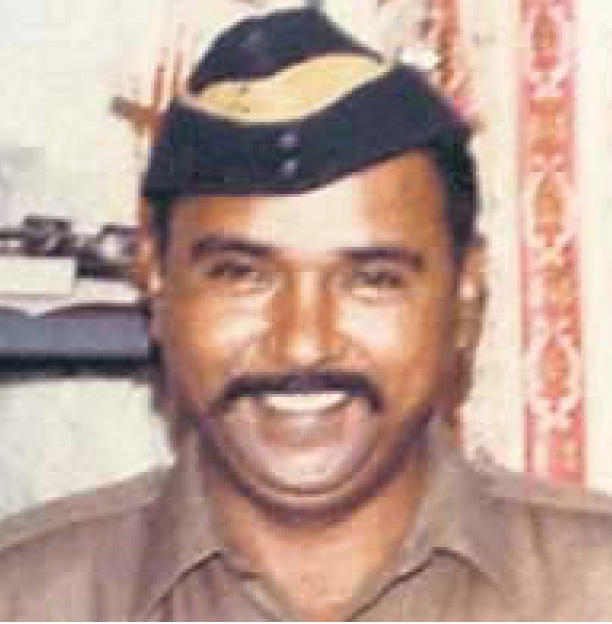 I guess you know who “Ajmal Kasab” is?

Great. Imagine how popular Ajmal Kasab is.
But, as for Tukarama Omble, very few know about him…

Let me give you some details about him.

“48 year old, Assistant Sub Inspector, Tukaram Omble was on the night shift on the night of Nov. 26-27, 2008, when 10 Pakistani terrorists attacked Mumbai.

After the news of firings at the Leopold Cafe, Oberoi and Taj Hotels came in, ASI Omble was assigned to take up position on Marine Drive.

At around 12.45 a.m., Omble was alerted on his radio that two terrorists had hijacked a Skoda car and were heading for Girgaum Chowpatty. Just minutes later, the Skoda whizzed past him.

Omble immediately jumped on to his motorcycle and chased the car. A team from DB Marg Police Station was hurriedly setting up a barricade at the Chowpatty Traffic Signal. As the Skoda car approached the Signal, the terrorists opened fire on the Police, but had to slow down because of the barricades.

ASI Omble overtook the Skoda and stopped in front of it, forcing the driver of the car to swerve right and hit the road-divider. With the terrorists momentarily distracted, Omble sprang toward one of them, Ajmal Kasab, and gripped the barrel of the AK47 rifle with both hands.

With the barrel pointing towards Omble, Kasab pulled the trigger, hitting Omble in the abdomen.

Omble collapsed, but, held on to the gun till he lost consciousness. This is what prevented Ajmal Kasab from killing many more innocent Mumbaikars than he did…

ASI Tukarama Omble was the brave, courageous one who sacrificed himself in the line of duty to save many lives. He was instrumental in capturing Ajmal Kasab alive…

Do you know where ASI Tukarama Omble’s family is now? What his family is doing? Or how are they coping with financially, psychologically and the trauma of losing the man of the house?

No body cares to know, nobody wants to even find that out what happened to his family! Not even the Media is looking into it! What a shame on the Gov’t?

Just compare what the Central & Maharashtra Governments have spent so far to support Omble family and how much they have spent on the well-being of the Terrorist, Ajmal Kasab!

Doesn’t this make the “Proud Mumbaikars” feel ashamed of all this or what?

ASI Tukarama Omble should be awarded the Bharat Ratna posthumously and his name should to be etched in Golden Letters in the annals of Indian History so that future generations may know the true history that it is the not the “Rich & Famous” Page-3 Politicians, Bureaucrats, Media Barons, Actors & Movie Moguls, but the “Ordinary Foot Soldier” who is ever ready to lay his life on the line so that the rest us may live in peace.

If you are a true, caring Indian and love your Motherland, share this with others…

4 thoughts on “A forgotten hero in the Mumbai terrorist attack…”