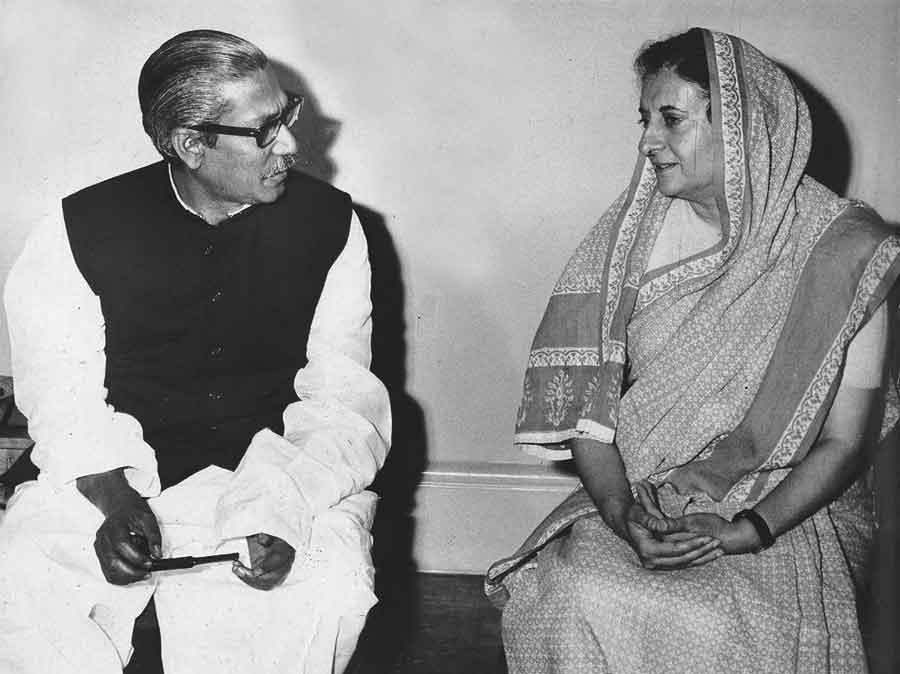 To ease India’s fear, Khandaker Moshtaque Ahmed, who succeeded Mujib as president after the coup, was making every attempt to be evenhanded and take Indian sensitivities into consideration. India demanded that the Moshtaque government must “disassociate itself from the murderers of women and children.”  India made it clear it would not accept 10 million Hindu refugees. Indian public opinion would be outraged. “We would turn them back at the border,” Teja said.

…it needed mainly trucks and jeeps as well as light and medium artillery. They ruled out China and Pakistan as a source of supply because both were considered “politically volatile.”

India’s second problem was Bangladesh’s recognition by Saudi Arab, Pakistan and China. These countries did not recognize Bangladesh in the past. So, their interest was in influencing the Moshtaque government, not in establishing friendly relations. India feared Pakistan would play on the Muslim theme.

India, for its part, was doing everything to maintain good relations with Bangladesh. Economic and military training assistance were being continued at their pre-coup levels. But New Delhi did not think that Bangladesh was sufficiently concerned about keeping good relations with India. Attacks on India in the Bangladesh press and on the government radio to supported this contention. India saw certain pro-Pakistani appointments within Bangladesh as evidence of an anti-Indian attitude.

Bangladesh diplomats in New Delhi reported a softer tone in India and started reciprocating. On 24 October 1975, Bangladesh Counselor Ataul Karim, who was always low key in his discussions, asserted there were no problems in Indo-Bangla relations. But the first secretary for political affairs, Ziaus Shams Chowdhury, indicated a great anxiety about possible Indian reactions to Bangladesh establishing diplomatic ties with Pakistan and China. Chowdhury took exception to the attacks on Bangladesh in the Indian Communist press and blamed the Indian government for it. He accused India of supporting anti-regime groups within Bangladesh without giving details.

The same day, Brigadier M.A. Manzur, the Bangladesh military adviser, and Major General H.M. Ershad, deputy chief of staff of the Bangladesh army, who was then attending the Indian National Defense College, reported that the two sides had adopted a “wait-and-see” policy. They indicated that an anti-Indian – and a pro-Pakistani and pro-Chinese – position might give rise to an Indian intervention in Bangladesh. Although it would be foolhardy for India to do this, Manzur said it was a possibility that could not be excluded.

The Indians had expressed their strong desire for continued good relations with Bangladesh. Moshtaque emphasized that America should not equate India and Bangladesh.

As for the Bangladesh army’s material needs, they revealed that the army already had many Chinese small arms. It needed mainly trucks and jeeps as well as light and medium artillery. They ruled out China and Pakistan as a source of supply because both were considered “politically volatile.” Yugoslavia had been considered a possible source. But this also had been dropped. Both dismissed America as a source. They would only say that the equipment would have to come from unnamed third countries.

“We continue to believe that there are circumstances under which India would intervene – covertly and ultimately overtly, if necessary – in order to protect its interests in Bangladesh and that these circumstances would include massive migration of Hindus or the emergence of a government which appeared to be pro-Chinese and pro-Pakistani,” the U.S. Embassy in New Delhi commented. “As indicated above, and in other recent reporting, the government of India does not now see problems which cause it serious concern; it is only worrying about potential problems. Finally, we would assume that the government of India is now developing and maintaining assets within Bangladesh for the purpose of influencing the situation should the feared problems arise.”

On 29 October, U.S. ambassador in Bangladesh, David Boster, told Moshtaque that Kissinger and his aides had discussed Indo-Bangla relations with Chavan during his recent visit to Washington. The Indians had expressed their strong desire for continued good relations with Bangladesh. Moshtaque emphasized that America should not equate India and Bangladesh. Bangladesh was a small country that only wanted to live in peace and couldn’t harm anyone, even if it wanted to.

Courtesy: This article is based on B.Z. Khasru’s book, The Bangladesh Military Coup and the CIA Link.

One thought on “1975 Bangladesh coup: What India knew”