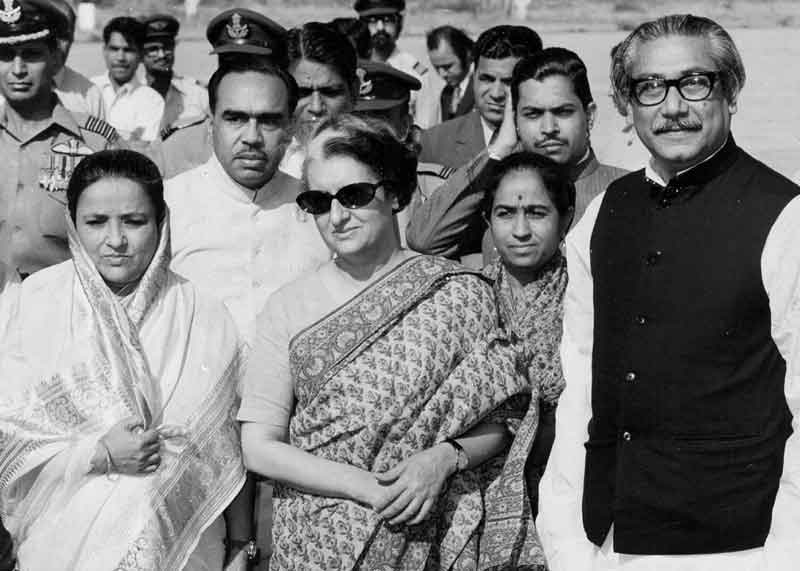 U.S. officials believed that given New Delhi’s intelligence resources, the “general coup plotting over the last eight months was certainly known to” the Indian government. Samar Sen, Indian high commissioner to Bangladesh when the new nation’s founding president was assassinated, disputed this notion. India’s foreign office, however, admitted having some vague knowledge of the August 1975 putsch in which President Sheikh Mujibur Rahman was assassinated along with most of his family members.

Near the end of 1974, India started worrying that Bangladesh’s economic difficulty could lead to a gradual breakdown of political and administrative systems.

Sen explained that India lacked foreknowledge of the coup because it had no intelligence agents in Bangladesh. India had stopped spying in Bangladesh at Mujib’s request. He wanted them out because RAW agents were monitoring his followers and keeping in touch with opposition politicians, at the same time.

Near the end of 1974, India started worrying that Bangladesh’s economic difficulty could lead to a gradual breakdown of political and administrative systems. Indian officials could not identify an agent for change. They did not think Mujib faced serious threat from his party or the opposition. They also dismissed the military as a threat because it was too divided. Extremist groups were too small and isolated.

On top of all this, the Bengalis were known for their proverbial ability to absorb great economic hardship. Thus, they were left with an inchoate concern that somehow things might begin to fall apart. India was directly concerned with two possible byproducts of turmoil in Bangladesh.

First, anarchy in Bangladesh might ultimately throw up an anti-Indian regime or invite involvement of others. Second, the ten million Hindus in Bangladesh might be affected disproportionately. The Hindus would be squeezed hard and even physically threatened, forcing them flee to India as they did in 1971. Such an outcome would severely strain both Indo-Bangla relations as well as Hindu-Muslim relations in India.

However, Indian officials as a whole were not yet overly concerned about the either situation. Officials willing to speculate predicted India would intervene at Mujib’s request to save him from a real threat. U.S. diplomats in New Delhi agreed with this assessment.

During Mujib’s rule, according to the U.S. assessment, Indian policies in Bangladesh did not conflict much with those of the United States. “India has come to appreciate our stance of non-interference in subcontinental bilateral problems and the low profile we maintain in Bangladesh.”

India was not concerned about Bangladesh having diplomatic relations with Pakistan and China. In fact, it had recommended this to Mujib. Its concern was that the new government would change its policy toward Islamic extremism.

Things were, however, entirely different a year later. On 7 October 1975, Y.B. Chavan, India’s external affairs minister, expressed concern about the Bangladesh events when he met U.S. Secretary of State Henry Kissinger in Washington.

“India was shocked by the killing of Mujib and his family, although it was treating this as an internal matter,” he said. “The new government had assured India it was not changing its policy, but Delhi was concerned about the potential strength of ‘extreme Islamic’ elements and also revolutionary left Communists.”

India was not concerned about Bangladesh having diplomatic relations with Pakistan and China. In fact, it had recommended this to Mujib. Its concern was that the new government would change its policy toward Islamic extremism. This would lead to trouble for the Hindu minority. Delhi also worried that China would try to stir up trouble with help of the pro-Chinese Communist groups in Bangladesh.

Kissinger, on his part, assured that Chavan: “We saw a requirement for good relations between Bangladesh and India. We had no interest in trying to weave Bangladesh into some complicated power game. Bangladesh should concentrate on economic development. What influence we have there, we will use to encourage good relations with India.”

Chavan was among those in Gandhi’s cabinet advocating a more cautious approach toward East Pakistan during the Bangladesh war. His position created lingering doubts about his goodwill toward Bangladesh. He reiterated that Indian concerns were that the radical groups were already active in Bangladesh and if the Pakistanis and the Chinese began meddling, there could be a new regional problem.

Kissinger noted that the Chinese had been down on Bangladesh in the past. He reiterated that the United States favored good relations between Bangladesh and India. Kissinger then asked whether India had known about the plot against Mujib in advance.

In India, the public in general widely believed the United States was involved in Mujib’s murder.

Following Chavan’s trip, the State Department sent a note to the U.S. Embassy in Delhi, summing his discussions.

“In response to the secretary’s query, Chavan said the Indians had no foreknowledge of the recent coup in Dacca,” the memo said. “He also agreed that the problem in Bangladesh for India was a potential one and that at present, relations with the new government were good.”

At the end of the first week after Mujib, Bangladesh confronted much uncertainty. Fear of India was in the air. Mujib’s successor, Khandaker Moshtaque Ahmed, found himself in a position that required a great deal of balancing act.

In India, the public in general widely believed the United States was involved in Mujib’s murder. On 19 August 1975, Ananda Bazar Patrika published a story, quoting the West Bengal Congress Party youth movement chief, Priyoranjan Das Munshi. He said the assassination once again proved how active the CIA and China were in the subcontinent. Mujib’s assassination sparked a flurry of protests rallies in India. The All-India Peace and Solidarity Organization held a meeting in New Delhi. Communist MP Bhupesh Gupta accused the CIA of backing the Mujib killers. Mujib’s death, he fumed, was part of a rightist conspiracy supported by U.S. imperialism. Ramesh Chandra, general secretary of the CPI front World Peace Council, claimed he had learned when he visited Dhaka in April 1975 that several CIA agents worked in Bangladesh as volunteers in aid-giving societies. He had mentioned this to Mujib, who said he knew it.

These allegations enraged America. The U.S. Embassy in New Delhi was livid by an article in the Congress Party newspaper Jugantar, implicating Davis Boster, U.S. ambassador in Dhaka, in the coup. The public affairs officer at the U.S. Consulate General in Kolkata protested to Jugantar editor. The editor claimed he was unaware of the article or how it got in the paper.

The Chinese were trying to isolate India. There was already Hindu repression before the coup; India was now very concerned over the possibility of increased repression and the refugee migration that might cause.

The editor, D.R. Bose, explained that he had left his office early in the evening on 17 November – the day before the article appeared. The story was brought to Jugantar by an Indian who had just returned from Dhaka. He was not a correspondent. But the editor did not identify him. Subeditor Deb Kumar Gosh had the story prepared and approved by the censor about midnight.

The editor tried to pacify the irate American official, saying he had a “stack of material” on America and Bangladesh, but would not “print anything without checking with” the consulate. “In particular, he said, he had a story about large-scale demonstrations in front of the American embassy in Dacca calling for Ambassador Boster’s withdrawal.”  He apologized and agreed to “run anything you want” in Jugantar.

The embassy decided to take up the editor on his offer. It decided to ask Bose to print a rejoinder on the front page as was the article along following lines: An article carried in the 18 November issue of this paper concerning the U.S. ambassador to Bangladesh was unauthorized for publication and did not represent Jugantar’s views. Jugantar regretted and disavowed any implication of improper activities on the part of the American ambassador to Bangladesh.

The State Department supported the consulate’s efforts to obtain retraction from Jugantar. It told the embassy to express America’s displeasure at a high level in New Delhi. The public affairs officer at the U.S. Consulate General in Kolkata spoke to Bose in the morning of 19 November 1975. Bose agreed to run a retraction, but in the body of an editorial or news comment on the Bangladesh situation in the next few days.

The same, the deputy chief of mission in New Delhi protested newspaper articles blaming the CIA for the coup when he met J.S. Teja, joint secretary for Americas at the foreign office. “We would take the strongest exception to continued allegations in the Indian press of the U.S. government involvement in the Bangladesh coup. This was a slanderous and totally false accusation.” Teja first attempted to brush off the press reports as matters the government could not control. He later agreed to inform authorities.

One thought on “1975 Bangladesh coup: What India knew”