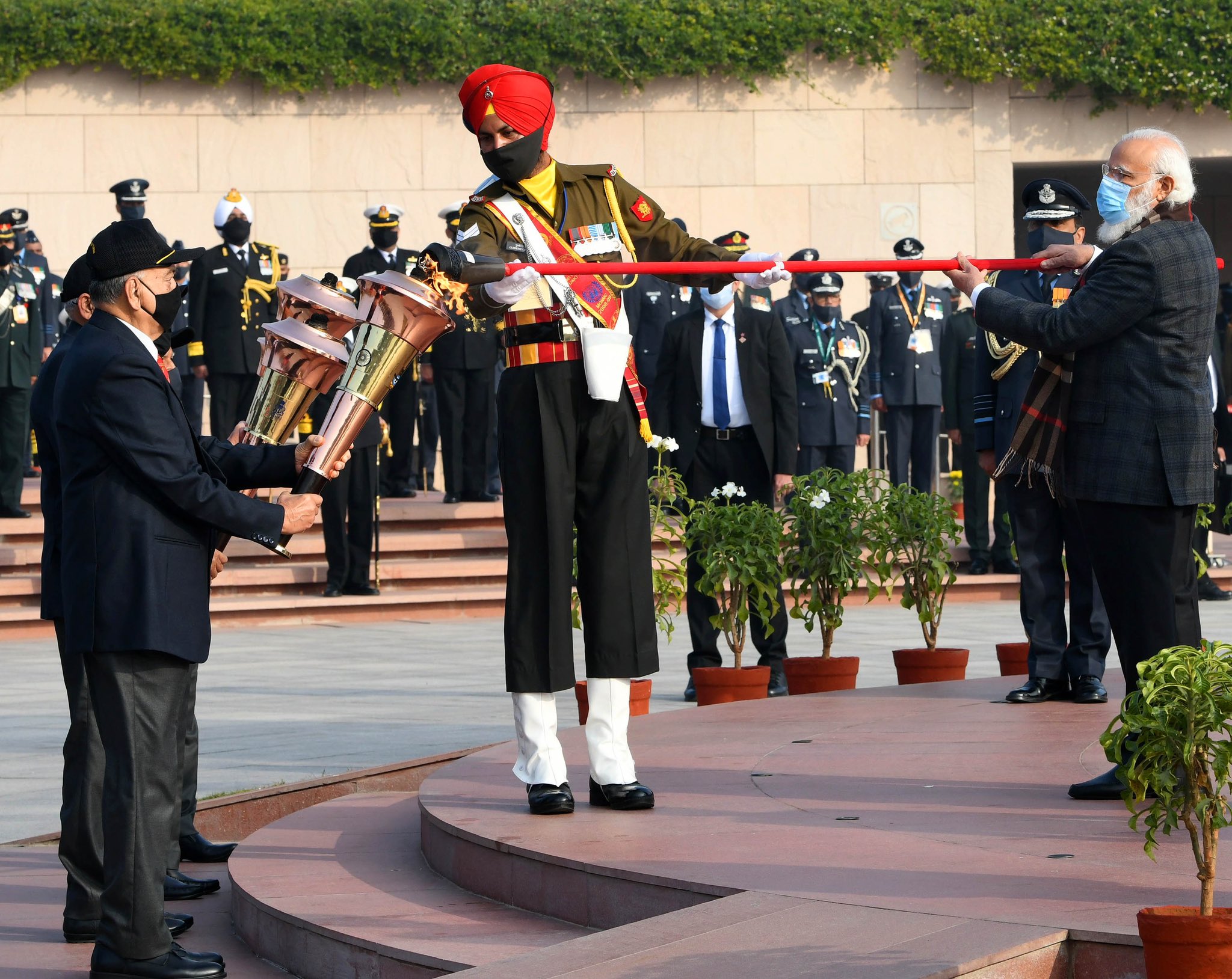 “On Vijay Diwas we recall the unwavering courage of our armed forces that resulted in a decisive victory for our nation in the 1971 war. On this special Vijay Diwas, had the honour of lighting the ‘Swarnim Vijay Mashaal’ at the National War Memorial,” tweeted Prime Minister Narendra Modi after paying tribute at the National War Memorial, New Delhi on the 50th anniversary of the Indo-Pakistan War of 1971, also called the ‘War for Liberation of Bangladesh.’

The Eastern Command of the Indian Army that was responsible for operations in the Eastern sector has, this year, hosted 30 Mukti Jodhas and seven serving members of the Bangladesh Army. Mukti Jodhas are war veterans of the irregular revolutionary force of Bangladesh called the Mukti Bahni that fought alongside the Indian Army for the liberation of their country.  While paying rich tributes to the Indian Army soldiers and Mukti Jodhas who laid down their lives during the war of liberation, Lt. General Anil Chouhan, Army Commander of the Eastern Command said, “Their martyrdom will continue to inspire generations of soldiers and citizens in this country as well as across the border.” He also stated that cooperation between the armies of the two nations has been growing steadily over the years.

The Northern Command of the Indian Army, that remains “forever in operations” to challenge the ongoing evil machinations of the neighbouring country, took time off from its onerous duties to celebrate Vijay Diwas with traditional aplomb. A large number of ex-servicemen and service personnel led by Lt. General YK Joshi, Army commander, Northern Command, paid homage to fallen heroes of the war and recollected the glorious victory.

A year-long celebration beginning on 16 December, 2020, is planned to commemorate the Golden Jubilee year of the great victory. It will be called the ‘Swarnim Vijay Varsh.’ Four ‘Swarnim Vijay Mashaals’ (torch symbols of victory), lit by Prime Minister Modi will be carried to various parts of the country. They will touch villages and residences of Param Vir Chakra and Maha Vir Chakra awardees of the 1971 war. All war veterans and Veer Naris (widows of those brave Indian soldiers who fought the war) will also be honoured. The ‘Swarnim Vijay Varsh’ is a welcome initiative by the Government of India as commemoration of the biggest Indian victory in the annals of military history. It has been defined as the shortest war to give such a decisive victory, to the extent of carving out a new Nation.

Sadly, there are some in the Nation who cannot rise above their petty issues even at times when national pride is being celebrated. While the BJP has showered wholesome praise and honour to the soldiers, the people and the political leadership of those times, the Congress has chosen to play politics. In a highly avoidable tweet in Hindi, Congress President Rahul Gandhi has spoken of such times “when the neighbouring countries of India believed in the might of the Prime Minister of India and were afraid of violating the border of our country!” Instead of celebrating the great event Gandhi chose to carry out a crude and unsophisticated comparison between former Prime Minister Indira Gandhi and present incumbent, Prime Minister Narendra Modi. Rahul forgot that even then the borders of the country were first violated by the neighbouring country. War was declared by the Indian prime minister in response to a coordinated, pre-emptive air strike on Indian Air Force bases by fighter aircraft of Pakistan on the evening of 3 December, 1971. At that stage too India responded to enemy aggression as she continues to do today whenever and wherever challenged. It is better for politicians who lack strategic vision to remain silent than to make obnoxious, ill informed statements that embarrass not only them but the entire nation.

Earlier too, the Congress while in power in the centre was petulant enough to avoid celebration of the Kargil victory, simply because the war was fought and won when the NDA government under former Prime Minister Atal Bihari Vajpayee was in place. It is reported that the excuse given for this lapse by Congress MP Rashid Alvi was that “Kargil was not a thing to be celebrated as the war was fought on Indian territory.” An ignorant, shameful statement to say the least! Celebration of Kargil Diwas started only in 2009 when another very patriotic Member of Parliament, Rajeev Chandrashekhar, called for the same in the Rajya Sabha.

Most shamefully, post the resounding success in the war the Congress led government of those times, instead of honouring the soldiers with gifts and bonanzas as is the norm everywhere in the world, chose to listen to a few frustrated bureaucrats heading the third pay commission and abolished the separate Pay Commission to Armed forces. It also drastically reduced the percentage of pension for armed forces and set aside the concept of One Rank One Pension (OROP) that was in place till that time. The government also restricted the right of serving soldiers to vote at their place of posting

As the nation gets poised to celebrate the golden jubilee of the great victory, the wounds afflicted by the government of those times are fresh in the minds of its soldiering community and the painful memories remain. Lack of strategic foresight in the political leadership impels some among them to take the soldier for granted. Nations have paid a terrible price for such mistakes, it is hoped that our great nation will remain safe from such a fate.

One thought on “1971 War: Amid Glorious Celebrations, Painful Memories Remain”